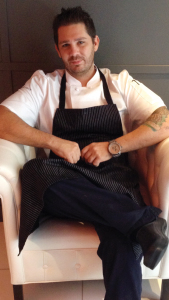 Kevin Munz, the developer/restaurateur who brought world –class dining to the Bay Area with Cullen’s American Grille, is once again raising the community’s culinary bar with the addition of kitchen master David Coffman to his staff.  Coffman, the self-taught chef who has blazed his way through some of Houston’s most imaginative restaurant operations, has taken command of the kitchen at Cullen’s American Grille.

In September, Munz, Cullen’s owner, and his General Manager Ryan Roberts finalized their agreement with Coffman and placed him in charge of their restaurant, catering and banquet operations as Executive Chef.  Coffman will also assist with the development of Bravissimo!, a new Italian cuisine concept  conceived by Munz and Roberts  which is scheduled to open in a space adjacent to Cullen’s this fall.

Munz, whose Clearpoint Crossing development has brought new construction and a dozen new businesses to the land adjacent to Cullen’s, hopes local residents will regard him and his enterprises as neighbors.

“My wife Sandra and I made a commitment to this community a long time ago,” Munz observes. “We were both raised in this area, our kids grew up in this neighborhood, and we want to see it prosper.  We like doing things in a big way, and the addition of David Coffman to our team is just the latest in a series of enhancements we’ve recently made to the Cullen’s complex.”

In the last twelve months, Munz and Roberts have upgraded and expanded the restaurant’s meeting and conference space, renovated the main dining area, and established a world class bar whose selection of hundreds of bourbons and scotches has earned it a listing on Great Bourbon Bars of America.
Ryan Roberts shares Munz’ enthusiasm for Coffman,  whose culinary pedigree boasts service at Houston restaurants including Katsuya, Benjy’s, 17 Restaurant in the Hotel Alden, The Tasting Room and Goro & Gun.

“This move should pique the interest of foodies across the Gulf Coast,” says Roberts, who has directed the Cullen’s operation since its launch over six years ago. “With David’s vision and experience, we’re going to make big things happen. Very big things.”

The Dallas-born Coffman says he is ready to take Cullen’s to the next level.

“This is an amazing facility, with one of the best equipped kitchens I’ve ever seen, and a solid track record,” observes Coffman. “Some very talented people—like Matt Womack, Paul Lewis, and Joe Stachiche—have all served on staff here and told me great things about the owners and management. Ryan and I had been talking, so once I met Kevin, the decision was easy.”

While the chef whose exploits have been chronicled in Forbes and Texas Monthly magazines is keeping his plans for the Cullen’s menu under wraps for the moment, he makes no secret about his passion for farm to table produce and ingredients.  “I’m on the lookout for farmers and suppliers in the Cullen’s area who can deliver the quality and freshness I depend on, “says Coffman.  “I’m ready to create the best food in the Bay Area and beyond, and I’ll welcome a call from anyone who can help me do that!”