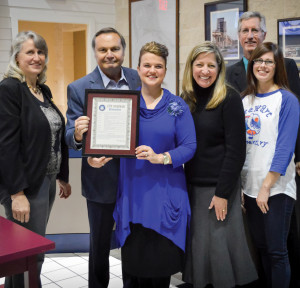 Few people can say they have had a day declared in their honor. However, the principal of Stewart Elementary School in the Clear Creek School District could after the City of Kemah officially proclaimed a day in Januard “Britani Moses Day.”

Dr. Moses was recognized by Kemah Mayor Carl Joiner at a City Council meeting for her professional achievements, unwavering dedication to the success of her students and staff, and support to the city as a whole.

“If there is someone who deserves a day named in their honor, it is Dr. Moses,” said CCISD Assistant Superintendent of Elementary Education Holly Hughes. “She dedicates her time and effort to going above and beyond for her students and staff at Stewart Elementary, and you can see the positive impact she has through her successes as an educator. She is an outstanding role model to all in CCISD.”

This is one more honor to add to Dr. Moses’ growing list of accomplishments throughout her career as an educator. Since beginning her journey as a teacher at Stewart Elementary in 2001, she has held several titles within the district, including assistant principal and Elementary English Language Arts coordinator, before returning to Stewart Elementary as principal in 2008. She went on to complete her Doctorate in Educational Leadership in 2010 where she used her thesis on cognitive benefits on second language learning to assist with organizing the district’s first ever Bilingual Institute.

Her leadership skills in engaging students, parents and the community over the years led to Stewart being named a National Blue Ribbon School in 2014, Dr. Moses receiving the prestigious 2014 Terrel H. Bell Award, and being selected as the CCISD 2015 Elementary Principal of the Year.

“Stewart Elementary has been a dedicated part of the Kemah community for decades. The staff members, parents and community members have partnered together to create an engaging and meaningful learning environment for each student,” said Dr. Moses. “Being recognized by the City of Kemah is an outstanding honor for me. I am humbled to serve in a school and community whose primary goal is to help students be successful.”

One could see the huge impact Dr. Moses has had on the Stewart community when the entire student body, staff, parents and Mayor Joiner surprised her with a spirit assembly the morning of her special day to celebrate her and show their appreciation. Even though it is a day honoring her, she quickly attributes her success to the compassion of each educator, parent and community member who has positively impacted Stewart Elementary year after year.

She attributes her passion for education to her parents, who were both teachers and principals, and her husband, Franklin, who is principal of Dobie High School. “Clear Creek ISD is proud to have a leader like Dr. Moses and looks forward to her continued success within the district,” Hughes said.