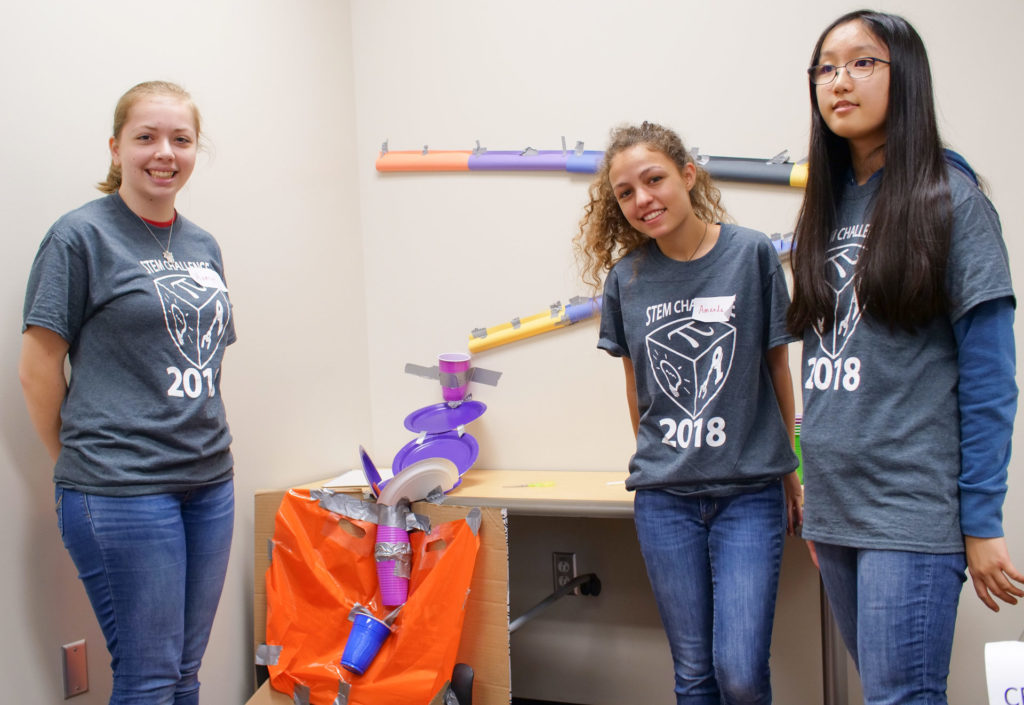 Kamryn Smith, Amanda Pastrano and Kana Iwahara from Clear Brook High School in Friendswood participated in the STEM Challenge 2018 at University of Houston-Clear Lake in April. Approximately 127 students from local high schools and colleges participated in STEM Challenge 2018 presented by Bridges to STEM Careers and Pathways to STEM Careers, a partnership between UH-Clear Lake and San Jacinto College. The teams worked together on projects, including constructing a marble maze using limited products such as construction paper and plastic cups.

Seventeen-year-old Amanda Pastrano made the most out of one of her weekends in April when she decided to participate in the STEM Challenge 2018 at University of Houston-Clear Lake. And, she says, she is glad she did.

“When I first heard about it in my computer science class, I thought it sounded very interesting,” said Pastrano. “A teacher called a meeting at school and asked who was interested; several of us decided to go.”

Approximately 127 students from local high schools and colleges participated in STEM Challenge 2018 presented by Bridges to STEM Careers and Pathways to STEM Careers, a partnership between UH-Clear Lake and San Jacinto College. The students divided into 32 teams, some who had already formed teams at their schools, like Pastrano’s, while others were placed in teams by the organizers. The teams also chose from two paths: a programming path and a science path.

“The STEM Challenge allows students to attempt and strengthen their analytical skills without a lot of pressure,” said UHCL Senior Lecturer of Computer Science Krishani Abeysekera, who oversees the challenge at UHCL. “In addition to students meeting and working with students from other schools, they also get to network with people from industry.”

Support for the conference came in part from grants from the National Science Foundation and the Department of Education, with additional support from the UHCL Alumni Association, ESyntaxis Corporation and Flow-Cal Inc. AtLink Communications and Tietronix Inc. provided summer internships for winners of the morning and afternoon challenges. Representatives from all four of the companies, as well as teachers from participating schools, served as judges.

“This was an awesome experience for students,” said Clear Horizons High School Algebra II teacher Carmen Hampton. “I told our Math Club about the STEM Challenge. The students participate in math competitions throughout the years, and agreed this would be a fun event.

“Our school had four students attend the challenge three years ago, but last year and this year, we took the maximum amount of students — 16 or two teams of four for each track: programming and non-programming (science).”

Teams worked together on three projects, a morning project that included exploring ways to stack paper plates with straws, marshmallows and other products along with other logic and analytical problems, while the afternoon assignment included rolling a marble through a constructed maze also using limited products. Students/teams that chose the Programming track participated in a programming challenge, where they had to solve problems using C, Java or Python. Those who did not know any programming chose the Science path and spent that time solving science puzzles and questions.

Interview for Internships at Tietronix:

San Jacinto College – North STEM Coordinator and Professor of Mathematics and Engineering Nathanial Wiggins believes the conference provides a mixture of challenges that are different than many may encounter in school allowing them to apply what they have learned in class a variety of ways.

“The STEM Challenge motivates students because they see other students get internships, and they compete knowing that industry professionals are looking upon them,” said Wiggins.

Although Pastrano’s team did not win, she was proud of the work they had done and noted her team had only included two of her classmates and not three like most of the other teams.

“I want to attend the conference next year, but we will be sure to add another student to our team,” she said.

For more information about the STEM Challenge, contact Abeysekera, 281-283-3831.