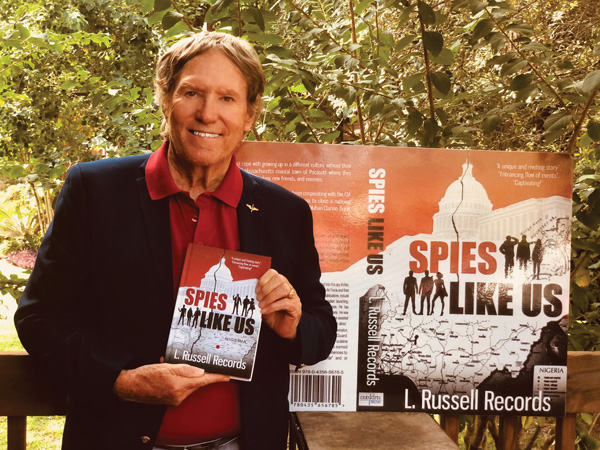 This League City resident of over 20 years is a former Air Force officer, a former business owner, and a long-time business consultant. He is a graduate of the US Air Force Academy and MIT. He is a Past Commodore of the Waterford Yacht Club. He wrote this book from the standpoint of having worked extensively in China in the early 1980’s, and coordinating with the CIA on Chinese capabilities and intentions.

This first book, titled “SPIES LIKE US” deals with the issue of global human-sex trafficking and how a Texas businessman, an ex-Naval Intelligence officer, Kirby Calloway, and the father of two boys, uncovers the global ring while working for the President of Nigeria in Abuja, Nigeria.

When he is discovered, the ringleaders, a cabal of globalist criminal bosses, try to take out his family now living in Pocasset, MA. and his team in Abuja. He and his friend Katanga, a loyal CIA agent, and his French-American lover Claire must escape Nigeria through Zurich and Rotterdam to bring the evidence back after two of his assigned CIA analysts are killed. They fight their way home through several vicious attacks and return to American soil after a daring mid-night sea rescue planned and executed by the sons.

The book is now available on Amazon and Barnes & Noble in hard- and paperback. A Kindle version is on the way. Book signings are now being planned, with the first one to be held at the newly-reopened Railean Distillery in San Leon on Thursday, Nov. 5th, from 6-8 p.m., the next one at Sundance Grill in Kemah on Thursday, Nov. 13 from 6-8 p.m., and Pomodoro’s in League City on Dec. 10th from 6-8 p.m. Bring your book to be signed, or a limited number of paperback books will be available for sale at $20 and hardback books at $28. Snacks will be available at each signing. Come and meet the author and hear his vision for this and upcoming books. Check out his Facebook page.