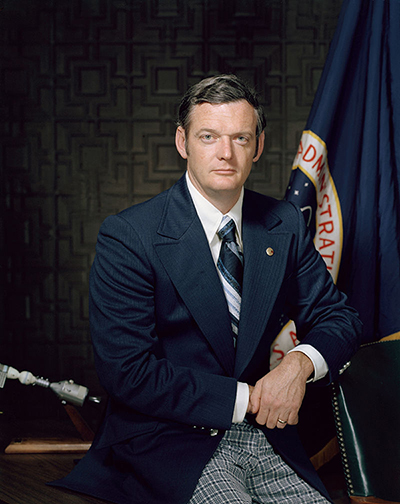 An engineer who was involved from the start in NASA’s efforts to launch the first astronauts into space and who later led Mission Control through some of its most challenging and triumphant hours, Flight Director Glynn S. Lunney has died at the age of 84.

A family friend said Lunney died in his sleep March 19 after a long illness.

“Glynn was the right person for the right time in history,” Johnson Space Center Director Mark Geyer said in a statement. “His unique leadership and remarkably quick intellect were critical to the success of some of the most iconic accomplishments in human spaceflight. While he was one of the most famous NASA alumni, he was also one of the most humble people I have ever worked with. He was very supportive of the NASA team and was so gracious in the way he shared his wisdom with us.” said Geyer.

Lunney was working for the National Advisory Committee for Aeronautics as a co-op student in 1958, when he was recruited by the newly-formed NASA at the age of 22. The youngest member of the Space Task Group, he and his colleagues at Langley Research Center in Hampton, Va., were charged with figuring out how to send the first astronauts into space.

In 1964, as the Gemini program was getting underway, Lunney was selected to become a flight director – along with Chris Kraft, John Hodge and Gene Kranz — one of the first four people to lead Mission Control at NASA’s Manned Spacecraft Center (known today as the Johnson Space Center) for the Gemini 9 mission in 1966.
As NASA’s focus turned to the moon and the first Apollo mission, Apollo 7; the first mission to orbit the moon, Apollo 8 (and, at around the same time, Lunney was named chief of the flight director’s office); the dress rehearsal for the first lunar landing, Apollo 10; and then the historic first landing, Apollo 11, during which he oversaw the ascent from the moon and rendezvous with the command module in lunar orbit.”Great time. I was — how old was I? I was 32, I guess, at the time we landed on the moon. I’d been doing this for eight years or so before that time, but — yes, I was kind of young at the time. We were all fired up, of course, the whole time, but events like that just supercharged that sense of energy and excitement about it. It was really powerful. Great stuff,” he said.

It was his next mission as flight director, though, that Lunney called the best of his career. Lunney and his team were just about to begin the evening shift on April 13, 1970, when the Apollo 13 crew radioed, “Houston, we’ve had a problem.”

“For me, I felt that the team shift immediately after the explosion and for the next 14 hours was the best piece of operations work I ever did or could hope to do,” Lunney said in his oral history. “It posed a continuous demand for the best decisions often without hard data and mostly on the basis of judgment, in the face of the most severe in-flight emergency faced thus far in manned spaceflight.”
“We built a quarter-million mile space highway, paved by one decision, one choice, and one innovation at a time — repeated constantly over almost four days to bring the crew safely home. This space highway guided the crippled ship back to planet Earth, where people from all continents were bonded in support of these three explorers-in-peril,” he said. “It was an inspiring and emotional feeling, reminding us once again of our common humanity. I have always been so very proud to have been part of this Apollo 13 team, delivering our best when it was really needed.”Lunney led his final shifts as a flight director during the Apollo 14 and Apollo 15 missions, before heading to Washington to serve as deputy associate administrator for spaceflight and acting associate administrator for space transportation operations. Lunney then returned to Houston to become shuttle program manager before retiring from NASA in 1985.

Glynn Stephen Lunney was born in Old Forge, Pa., on Nov. 27, 1936. He graduated with a bachelor’s degree in aeronautical engineering from the University of Detroit in 1958, when he saw his first drawing of what would become the Mercury capsule, igniting his desire to join NASA.

After his 27 years at the space agency, Lunney went to work for Rockwell, overseeing the division of the company building Global Positioning System satellites. He then worked on the space station before returning to the shuttle, becoming vice president and program manager for United Space Alliance, a company equally owned by Rockwell (later, Boeing) and Lockheed Martin, that supported NASA’s spaceflight operations contract.

For his service to the U.S. space program, Lunney was honored with the NASA Distinguished Service Medal, NASA Exceptional Service Medal and was awarded the Presidential Medal of Freedom as a member of the Apollo 13 mission control team. In 2005, Lunney was presented the National Space Trophy from the Rotary National Award for Space Achievement Foundation.

Lunney is a co-author of the 2011 book, “From the Trench of Mission Control to the Craters of the Moon,” which he wrote with his fellow members of the Gemini and Apollo-era flight dynamics branch. He wrote his own book, “Highways Into Space” in 2014.

He was portrayed on screen by actor Marc McClure in the 1995 feature film “Apollo 13” and by actor Jackson Pace in the National Geographic series “The Right Stuff” for Disney+. Lunney appeared as himself in the 2017 feature-length documentary, “Mission Control: The Unsung Heroes of Apollo.”

Lunney is survived by his wife of 61 years, Marilyn Kurtz, and their four children, Jennifer; Glynn Jr., Shawn and Bryan. The latter, Bryan, is NASA’s first second-generation flight director.