Some duties a surprise to new sheriff 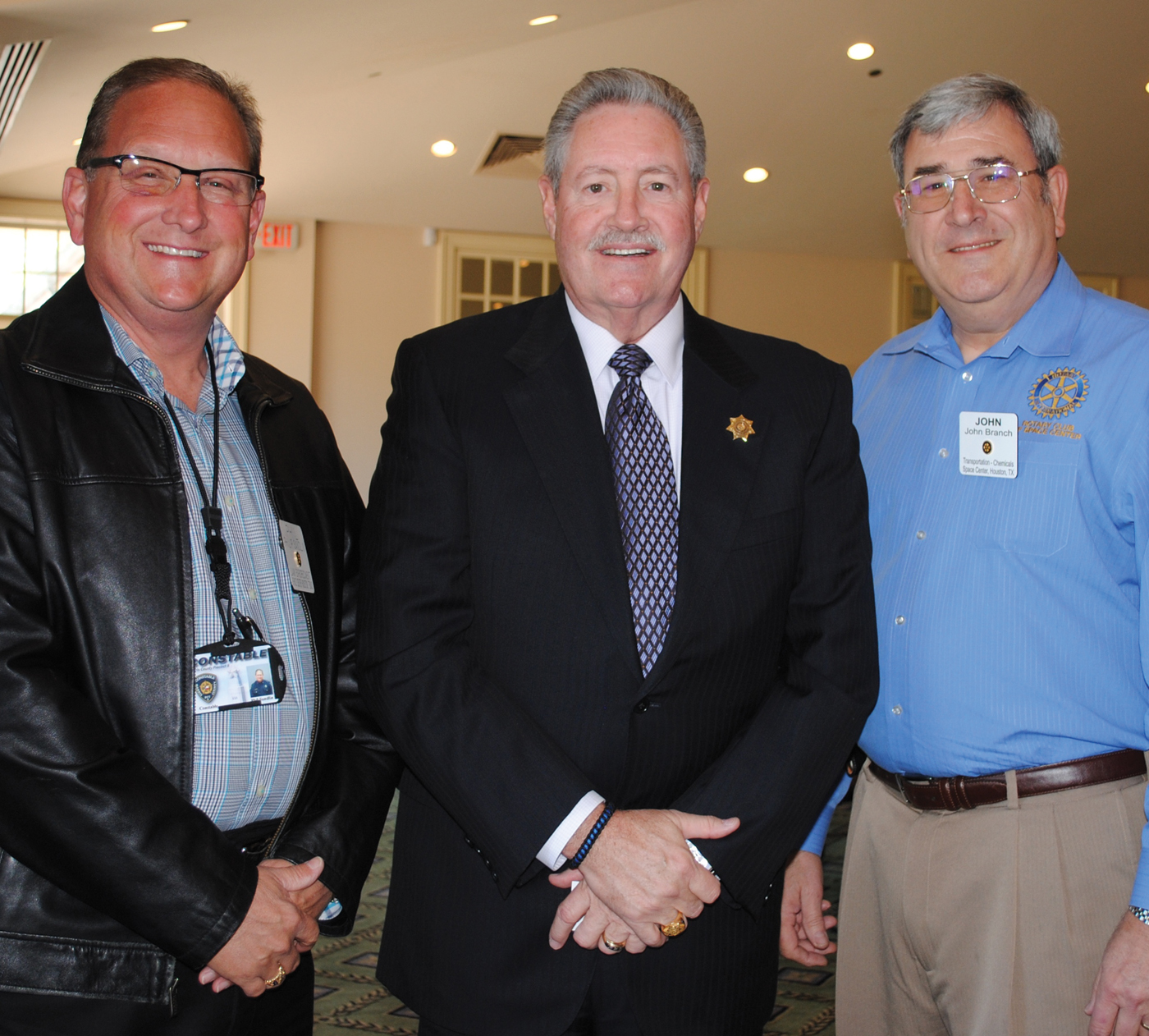 A new sheriff was the town the other day – Harris County Sheriff Ron Hickman, center, who came down to Clear Lake to speak at the Space Center Rotary Club luncheon at Bay Oaks Country Club. Here, Rotary President John Branch, right, and Precinct 8 Constable and Rotary member Phil Sandlin thank him for coming.

Being sheriff of Harris County is no piece of cake. In fact, it was quite an eye opener for Ron Hickman when he was chosen to fill the vacant post.

Not only does he oversee some 9,000 “guests” each day, there are bills to pay, their medical and psychiatric care, directing his force of deputies as they track the bad guys, keeping an eye on how his $462 million budget is spent and much, much more, he told members of Space Center Rotary at their recent luncheon at Bay Oaks Country Club.

Explaining that his 25-member senior staff has 600 years of experience, he describes some of his duties. “We run a small hotel with 9,000 guests, but we have to feed them.” The cost of eggs alone was quite a shock for the new sheriff. “I wrote a check of $600,000! And, we serve 9.7 million meals each year. The law says I have to feed the inmates and provide them with medical care.”

All new inmates are screened “at the front door,” he continued – catching a lot of undiagnosed problems. “When they’re busy breaking into cars, they don’t have time to go to the doctor,” he joked, adding that the taxpayer then becomes responsible for their medical problems.”

Besides his “hotel,” he says he runs a pretty sizeable hospital with two psychiatrists providing inmates with medical care at a cost of some $22 million annually. Hickman says 2,243 of his inmates are on mental health drugs with 84 diagnosed as acute.

“We want them taking those drugs, cause I want them happy,” he chuckled before turning to the more serious matter of the inmate who stayed locked in his filthy cell for many days, lying in his own feces  last year before Hickman became sheriff. “We settled for $400,000.”

Only about 750 deputies are in law enforcement, he said, explaining how his budget was split into three parts – patrol, detention and medical.

Problems? The sheriff thinks law enforcement needs to “find ways to work together, if we’re going to be more efficient and more effective.” And, bring all police agencies together.

Another problem is bonding out of jail. “A kid who steals cigarettes can’t afford the bond but a drug dealer can. So who’s the risk?” he asked as he said goodbye and headed back to his “hotel.”