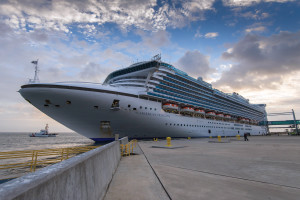 With both Princess Cruises and Norwegian Cruise Lines offering voyages this year from the Bayport Cruise Terminal, the Port of Houston (POH) is embarking on a new chapter as an emerging hub for the lucrative cruise industry.

According to Ricky Kunz, the Port of Houston Authority’s (POHA) managing director for trade development and marketing, the current cruise season, which began last fall, marks the first time that two cruise lines have operated out of the Bayport Cruise Terminal. Princess began sailing from the terminal during the 2013-2014 season and Norwegian joined them in November 2014.

“Princess enjoyed a great first season, with 25 cruises that carried over 70,000 passengers,” Kunz said. “This season we’re anticipating a combined 48 cruises and 144,000 passengers.”

Norwegian Cruise Lines’ Norwegian Jewel made its inaugural voyage from the Bayport Terminal last October after signing a three-year agreement in 2012 to join Princess Cruises’ Caribbean Princess in calling on the Pasadena terminal. Kunz says an economic impact study conducted in 2012 by Dr. John Martin indicates the cruise industry accounts for more than 220 jobs and $2 million per ship call at the POH. The cruise season runs from late fall through late April or early May. Both ships are providing seven-day voyages and combined they are expected to deliver more than 400,000 passengers between now and 2017.

“Those (economic impact) figures include what passengers spend and what the ships spend. The ships have to buy fuel and supplies and passengers need gas to get to the terminal or pay for taxis. Plus, there are hotel rooms and pre- and post-cruise entertainment costs,” Kunz said.

This season marks the return of Norwegian Cruise Lines to the Port of Houston. The Miami, Fla.-based company kick started the modern era of cruising at the port when it began offering cruises originating from the POH’s Barbours Cut terminal in 1997. But the company discontinued the service in 2007.  On its November 2014 inaugural cruise, the Jewel became the first large cruise ship to call the Western Caribbean’s Banana Coast, the newest cruise port in the region, located in the deep-water Bay of Trujillo, Honduras.

The November 2013 voyage of the Emerald Princess, which called on Bayport in the 2013-2014 season, marked the first scheduled cruise voyage from the Bayport Cruise Terminal since 2008, when damage caused by Hurricane Ike resulted in ships that had been sailing from Galveston temporarily utilizing the terminal. The Bayport Cruise Terminal was constructed in 2007 at a cost of $81 million, but had sat mostly idle since ’08.

“It is quite a coup to have both ships sailing from the Bayport Terminal and it’s great for passengers because it gives them options on the type of cruising they want to do. The ships sell a different atmosphere and cruise experience although their ports of call in the Caribbean are basically the same,” Kunz said.

The Caribbean Princess, a 952-foot ship is manned by a crew of over 1,200 and has a passenger capacity of 3,082. Launched in 2004, the Princess represents the top of the line of Princess Cruises’ 18-vessel fleet. The ship features over 1,500 guest rooms, along with more than 15 dining room options and a host of showrooms and lounges and a lengthy list of activities available for children.

Princess Cruises was founded in 1965 and is based in Santa, Clarita, Calif. With over 1.7-million passengers annually calling on more than 300 ports world-wide, Princess has been a pioneer in the cruise ship industry for 50 years. The company’s Pacific Princess gained worldwide recognition when it served as the venue for the iconic 1970s TV show “The Love Boat.”

With a capacity for 2,470 passengers, the 965-foot Jewel, launched in 2005, is the mid-range sized ship in Norwegian Cruise Lines’ 14-vessel fleet and it underwent an extensive renovation in 2014. With a crew of over 1,100, the Jewel offers 16 dining options and 13 bars and nightclubs. Ports of call during the voyages originating in Houston include Cozumel, Mexico, Belize City, Belize and Roatan, Bay Islands, Honduras.

“Both ships have basically the same ports of call,” Kunz said, “except that Norwegian alternates between two different ports in Mexico.”

While this season marks a high point in the modern history of cruises originating in the Houston Ship Channel region, it is by no means the first time cruise ships have called on Houston.

The Bayport Cruise Terminal is one of the most modern cruise ship terminals in the country. The 96,000-square foot terminal is located on the western shores of Galveston Bay and is close to numerous great restaurants and hotels.

“With two lines now operating here, we had to add an additional parking lot, so now we can park about 1,700 cars,” Kunz says. “When the ship leaves, the gates are locked and we have 24-hour guard service. It’s really one stop shopping for passengers because they can pull into the terminal, get on the ship, take the cruise, come home and get in their car and go home. We built the new lot to the west of the existing lot, so we provide a shuttle service to and from the terminal. Many other places have off-site parking, so we’re fortunate to have everything at the terminal.”

Kunz says while both Princess and Norwegian are currently offering only seven-day cruises, plans are in the works for at least one of the companies to begin offering 10-day cruises that will incorporate Eastern Mediterranean and Caribbean ports of call. He adds that the ongoing dredging work to deepen and widen the Bayport and Barbours Cut channels could potentially clear the way for the Port of Houston to welcome even larger cruise ships in the near future.