Smith is finalist for Superintendent of the Year 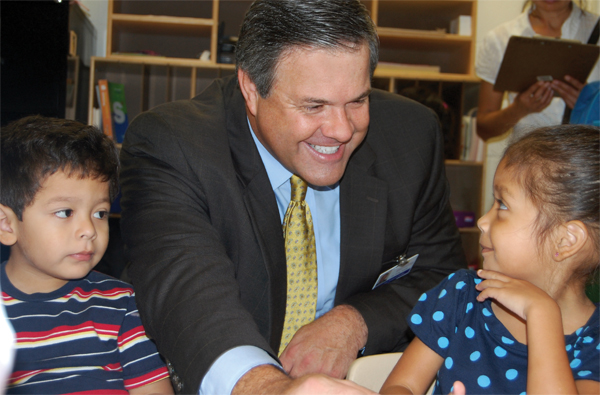 AUSTIN — Five public school administrators from across Texas were selected as state finalists for the annual Superintendent of the Year award sponsored by the Texas Association of School Boards. Since 1984, the program has recognized exemplary superintendents for excellence and achievement in educational leadership.

The state selection committee, which interviewed regional winners Aug. 24-25 in Austin, focused on such issues as the demands for America’s workforce, public education funding and the pending school finance lawsuit, successful board relationships, technology integration, and academic excellence.

Serving approximately 31,000 students, Gutiérrez has led Edinburg Consolidated ISD for three years and has 16 years in education administration. The committee cited his work to develop the Visions Academy (a dropout recovery program), complete and staff new schools in an economic crunch, and focus on innovative teaching and learning through technology. Also noted were his visits to one home per day during his first 100 days as superintendent. Gutiérrez earned an associate degree at Texas Southmost College at Brownsville, bachelor’s degree at Pan American at Brownsville and University of Texas Pan American and master’s and doctorate degrees at UTPA.

Smith, superintendent of Clear Creek ISD for four years, serves more than 40,000 students and has 27 years of administrative experience. The selection committee noted that student success in the district could be credited in large part to Smith’s attention to changing demographics and also noted that he faced recent funding issues by attacking the budget with a scalpel instead of a machete. His efforts to host job fairs, keep children of laid-off NASA employees enrolled, and, after Hurricane Ike, get school back in session in two weeks were also cited. Smith earned a bachelor’s degree at Oakland University, master’s degree at the University of Houston-Clear Lake, and doctorate at Texas A&M University.

At the helm of Pflugerville ISD for six years, Dupre has a total of 16 years in education administration and serves a student population nearing 23,000 students. Of particular interest to the state selection committee was the district’s goal under Dupre’s leadership to have each student be either college bound or career-ready by 2020. They cited organizational changes from top to bottom to ensure all systems are well aligned for student achievement and a strong board-superintendent relationship. Dupre earned his bachelor’s degree at Harding University, master’s degree at the University of Houston, and is pursuing his doctorate at Texas A&M University.

Serving approximately 1,500 students, McEntire has six years of experience in education administration and has been superintendent of Presidio ISD for six years. The state committee noted that under his leadership, the district does not spend a dollar unless it has a positive impact on students. Also of interest was Presidio’s Pathways to Graduation program, where 102 out of 102 students graduated, and McEntire’s effective management systems. McEntire earned a bachelor’s degree at Austin College, master’s degree in computers and cognitive systems at the University of North Texas, and master’s in education administration at Lubbock Christian University.

With a total of 34 years in public education administration, Zolkoski serves a student population of more than 41,000. He has held the position of Ysleta ISD superintendent for three years. The state selection committee cited Zolkoski’s focus on the critical importance of communication with students and parents and his strong emphasis on student success, demonstrated by his hands-on involvement as an instructor in the district’s algebra camp every year. Zolkoski received his bachelor’s and master’s degrees at Southwest Texas State University and earned doctorate degrees at California Coast University and the University of Texas at Austin.

Candidates are chosen for their dedication to improving educational quality, board/superintendent relations, student achievement, and commitment to public support and involvement in education. Superintendents from any of the state’s 1,034 school districts are eligible for nomination by their local boards of trustees. District nominees are submitted to a regional selection committee, which submits one nominee per region to the state selection committee.

The 2012 Superintendent of the Year will be announced Sept. 28 at the TASA/TASB Convention in Austin. The winning superintendent will receive an award from Balfour, program underwriter.

TASB is a nonprofit association established in 1949 to serve local public school districts. School board members are the largest group of publicly elected officials in the state. The districts they represent serve more than 4.9 million students.