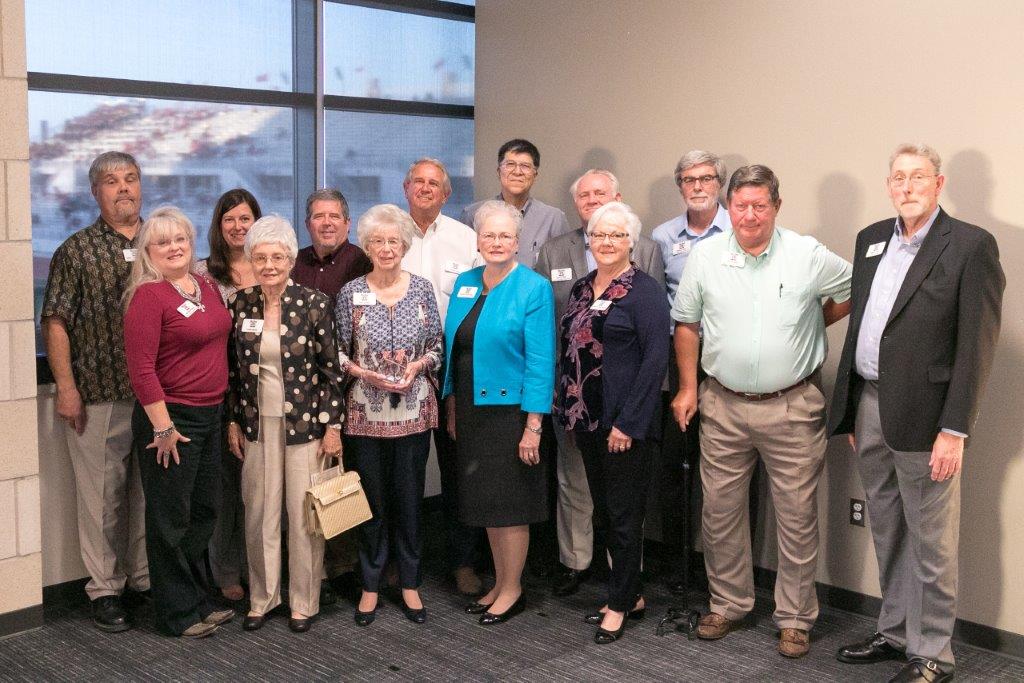 Click here to view a complete photo gallery of the reception and ceremony.

Click here to view a recording of the Livestream video of the introduction of the new honorees to stadium fans from the fieldhouse balcony.

The Athletic Hall of Honor was formed in 2016 to recognize the efforts and contributions of former CCISD student athletes, coaches and teams who have brought distinction, honor and excellence to themselves and the Clear Creek Independent School District. The 2017 nominations were only sought for candidates active or enrolled from 1948 to 1972 and whose athletic career was linked to the former Webster High School or Clear Creek High School.

Former Clear Creek ISD teacher, principal and board member, Ralph Parr, emceed the special evening welcoming the CCISD sports legends back to their alma mater with a surprise performance by the Clear Creek High School Chamber Singers, under the direction of James Park. The choir treated the Wildcat alums to the still-familiar school song and a pitch-perfect rendition of America the Beautiful. Hall of Honor Board Chair, Dr. Lynn Davis (via video stream) and Former Director of Athletics, Bill Daws, also warmly welcomed their Wildcats back home.

Parr then began the sprint down memory lane to the first 16 years of Clear Creek High School, 1956-1972, by welcoming up the athletes or their representative, one by one, who dominated that era and who were formally inducted into the Athletic Hall of Honor that evening:

Coach Max Blansit came to Clear Creek High School in 1960 teaching social studies and coaching football, track and field. He started the Cross Country program at Clear Creek in 1962 where he coached until 1974 leading these Wildcats runners and Track and Field to multiple District, Regional and State Championships. After 36 years in the teaching profession, Coach Blansit retired in 1989.  He remained in the League City area serving on numerous organizations and boards. Coach Blansit’s widow, Frankie Blansit, accepted the award on his behalf at the ceremony.

A 1960 graduate of Clear Creek High School, Kathleen Trcka Taylor traveled to Austin four times in three years to compete in a State Championship. Once as a participant with the Clear Creek High School regional champs girls basketball team and the three years following as an ace doubles tennis player. In addition to winning the coveted state championship trophy for doubles tennis her senior year, Kathleen excelled academically and was also voted Most Athletic and Best All Around. Kathleen still enjoys living in this area and supporting her beloved Wildcats.

At 6 feet, 5 inches tall, Bill Doty, a three year starter, dominated the basketball court taking his beloved Wildcats to two state tournaments. During his tenure at Creek, Bill also ran for the Sprint Relay team. After graduating in 1962, Bill went on to play for Rice University on a four-year athletic scholarship.

Dedicated to keeping Creeks winning tradition alive, Dwayne “Curley” Lenox, a three year starter, did his part in helping lead the charge to Clear Creek High School’s 1963 State Basketball Championship. Curley was Second Team All-District, 1963’s District Player of the Year, First Team All-State, and the Texas High School Coaches Association All Star, to name a few. Curley went on to Texas A&M where he was voted All Southwest Conference Freshman. After transferring to Southwest Texas he became a three-year starter, 1968’s Team Captain, leading scorer, and voted Third Team All Lone Star Conference. Curley was unable to make the trip and his brother Scooter, a member of the 2016 Athletic of Hall of Honor, accepted the award on his behalf.

Rosemary Fleener Durham played Basketball and Volleyball at Clear Creek High School before graduating in 1964. Rosemary was voted the team MVP by her volleyball peers. In Basketball her honors include All District her Junior and Senior years as well as All-State while playing for the 1964 Class AA state runner-up.

Paul Hackett was a triple threat at Clear Creek High School, played Basketball, Baseball and Football before graduating in 1966 and going on to attend Southwest Texas State where he played Basketball. While at Creek Paul not only was a leader on the court but the mound as well. Voted First Team All-District his Junior and Senior year, Paul out dueled Nolan Ryan and the Alvin Yellowjackets for a Clear Creek victory.

Terry Mathis, a 1967 graduate of Clear Creek High School was the first baseball player in CCISD to play in college and then be drafted in the sixth round by the Philadelphia Phillies at the age of 18. While at Creek Terry also played Basketball, serving as team captain his senior year. That same year, Terry made first team All-District while the team placed third in the State Basketball Championship

Clear Creek High School’s prestigious Most Valuable Player football award was renamed for this former Wildcat, Steve Stewart. Stewart was an All-District and Third Team All-State linebacker and served as Captain. Upon his graduation in 1968 Steve attended The University of Texas on a football scholarship playing for Coach Darrell Royal. After receiving his degree from Sam Houston State, Steve returned to this area where he coached at Clear Lake, LaPorte, Friendswood and Dickinson before entering private business. Steve passed away in 1984. Steve’s brother, Jim Stewart, and his mother Doris Stewart, accepted the honor on Steve’s behalf.

Another triple threat for Clear Creek High School, Larry Kelly lettered in Football, Basketball and Track prior to graduating in 1967. He was voted All-District Most Valuable Back his senior year. Larry was also a National Merit Scholar and attended Texas A&M University on an athletic scholarship where he played for two years under Coach Gene Stallings.

The 1968 track season for Clear Creek High School was easily touted as the best the school had ever seen due in large part to the contributions made by Mike McClendon, his teammates and Coach Max Blansit. Mike placed first in the state meet in Austin that same year. Upon graduation Mike attended Oregon State University on a full track scholarship.

Richard Huhn is another star basketball player hailing from Clear Creek High School and inducted into the Athletic Hall of Honor. A 1968 graduate, Richard was a two time All-State first team candidate, fourth leading all-time scorer with an accumulation of 1681 points over three years, and selected District 12 AAA’s Most Valuable Player.

Jody Medford racked up numerous honors and accolades during his football career at Creek and beyond. Jody was a three-year varsity starter, making All-District First Team for both Offense and Defense. Attending Rice University on a four-year football scholarship Jody set the school record for sacks in a season and tackles for loss. In 1976 Jody was drafted by the Houston Oilers. In 1977 he played for the New Orleans Saints before moving on to the Calgary Stampeders where he was voted MVP.

The CCISD Athletic Hall of Honor, which operates as a 501(c) 3 and under an independent Board of Directors, gratefully acknowledges Lewis Jewelers and the Luis Garcia family as Founding Sponsors of the Athletic Hall of Honor and for their generous support of the tribute walls in Challenger Columbia Stadium. The 2017 Gold Sponsors who also make the evening possible are Hometown Bank/League City; Joe & Jennifer McKinney; Oral Surgery Associates, LLP; and Gulf Coast Educators Federal Credit Union.