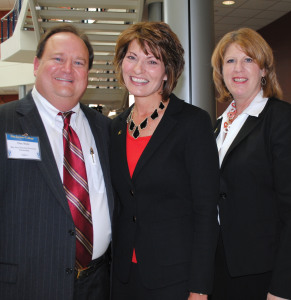 San Jacinto College is growing faster than we might realize, Chancellor Dr. Brenda Hellyer told a crowd of community leaders invited to the State of the College Luncheon. In fact, the number of degrees awarded has almost doubled since 2006 – from 2,682 that year to 5,012 this past year.

And,4,968 of those students transfer to four-year institutions.

“We’re not only the most affordable school in town, we work to keep taxes affordable also,” she said of the college that was created in 1960 in Pasadena and is now the seventh largest college in Texas and the third largest in Houston.

Breaking down the fall enrollment total of 28,020, she supplied quick facts sheets showing the Central Campus is the largest with 13,612 students. The South Campus has 10,921 students while 7,585 attend the North Campus. Almost 21,000 students attend part time while 7,112 are full time.

The chancellor said the average age is 23, and 77 percent of San Jac students are the first in their families to attend college. “We take everyone,” she said, going on to explain that “If our students don’t succeed, then we don’t succeed” – which also means helping many students get over their fear of math. 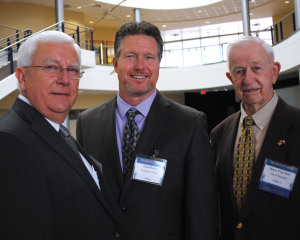 Port Commissioner John Kennedy, from left, talks with Economic Alliance President Chad Burke and Pearland Mayor Tom Reid as they await the start of San Jacinto College’s State of the College Luncheon at the South Campus.

“This (the luncheon) is really a celebration of all we’ve done to focus on student success,” she said, adding that San Jacinto College is the hub of industries that drive the Bay Area Houston economy, such as NASA and the Port of Houston. Besides partnerships with Boeing, Lockheed Martin, the Johnson Space Center and Space Center Houston, the college offers the only degree program in Texas in mariner technology.

The college currently owns waterfront property in the Port of Houston’s Bayport Terminal, where the college’s new Maritime Complex will be built. Many outside maritime industry partners are being consulted to make certain the college builds the very best facility possible.

In welcoming the crowd, Economic Alliance President Chad Burke said, “We’re really blessed to have a college like San Jacinto College in our region.”

BAHEP Executive Director of Special Initiatives Dan Seal stressed the importance of a smart, well educated work force as he introduced Hellyer. “Special thanks today for San Jacinto College, who for decades now . . . has been so effectively partnering with local industries to deliver education at its finest.”