Rock Bottom and Back™ offers hope to the hopeless 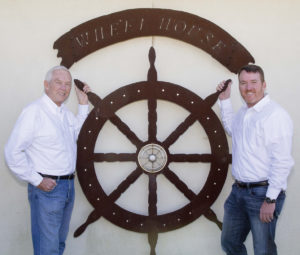 Jerry Strickland (left) and his son, Whitney Strickland (right) help men overcome alcoholism and drug addictions through their involvement with The Wheelhouse in Deer Park.

The sound of a Hot Pockets sandwich hitting the concrete floor startled him to consciousness. Whitney Strickland shook his head to clear it. The steel bars told him he was in jail, but he couldn’t remember how he had gotten there. He closed his eyes, praying that he had not wrecked another vehicle.

Whitney’s life once consisted of one alcohol-induced disaster after another—wrecked cars, DUIs, jail, memory loss—all part of a vicious cycle that never seemed to end. In that jail cell, Whitney finally hit rock bottom, and as he made his way across the Kemah Boardwalk, he decided to end it all.

I’ve been to treatment centers. I’ve talked to psychiatrists. I’ve done everything. I’m dying a long, slow death, he thought. I’ll just jump off this bridge and get it over with.

Whitney put his foot on the rail.

Whitney’s story did not end on that bridge. It began there. He returned home, determined to rebuild his life. He joined Alcoholics Anonymous, became sober, and then dedicated his life to helping others who were struggling to overcome alcoholism. For the past 10 years, Whitney has served on the board of directors of The Wheelhouse, an alcohol and drug treatment facility for men, located in Deer Park.

Whitney’s story is one of 22 featured in the upcoming book, Rock Bottom and Back™—From Desperation to Inspiration.
This book, which I coauthored with Earl B. Heard, is a startlingly honest portrayal of the inspirational lives of people who have hit rock bottom through every way imaginable—alcoholism, drug addiction, sex addiction, gambling addiction, loss of a loved one, childhood trauma, post-traumatic stress disorder, and homelessness—and then came back to help others in extraordinary ways. 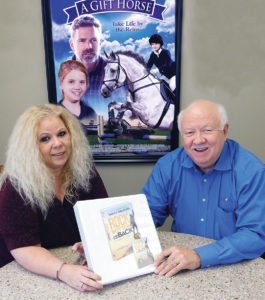 Susan Mustafa and Earl B. Heard, coauthors of Rock Bottom and Back

“The concept for this book came from my own experience. I’ve been to rock bottom—personally and professionally— and so many good people helped me find my way back,” said Earl, founder and CEO of BIC Alliance and publisher of BIC Magazine, the Western Hemisphere’s largest multi-industry energy publication. “Through this project, I wanted to give people hope, to show them that no matter how bad things seem, help is available. To that end, we also created a companion DVD, which features interviews with six of the people in the book, including Jerry and Whitney Strickland.”
When Earl approached me about writing this book, I loved the concept, but I didn’t realize how powerful these stories would be. We have featured some incredible people whose experiences are reminders that we can rise above anything when we dedicate to helping others. Through writing this book, I learned that one person truly can make a difference.
In addition to Whitney, five other people featured in the book reside in Texas:

Jerry Strickland: Jerry, Whitney’s father, is an entrepreneur who once owned AltairStrickland, one of the largest turnaround companies in the oil industry. A former alcoholic, Jerry set out on a mission to help three of his four children overcome their addictions and discovered that he had to fix himself first. Today, Jerry’s philanthropic efforts are endless. From The Wheelhouse to Camp Aranzuzu in Arizona and Extra Special People in Georgia, Jerry has helped countless children and adults through the Linda and Jerry Strickland Foundation.

Maurice “Termite” Watkins: Once a professional boxer, Termite fought in the welterweight division and had amassed an incredible record that landed him on the same card with Larry Holmes and Muhammad Ali. That card proved to be career ending for Termite and Ali. For the next five years, Termite drowned his sorrows in cocaine. After an ultimatum from his former wife forced him to quit using drugs, Termite dedicated himself to helping Iraq build a boxing team in the midst of a war, a team that made it to the 2004 Olympics. Termite now runs Fighter Nation, a boxing ministry in Houston that sent the first American female boxer, Marlen Esparza, to the 2012 Olympics.

Theresa Westbrook: Theresa grew up in North Texas, the victim of childhood sexual molestation. For many years, she kept the abuse secret, afraid and ashamed to tell anyone. It was only through writing a book, A Strand of Pearls, that Theresa finally revealed the effect that abuse had on her life. Westbrook, a minister, cofounded Pearls of Shalom Ministry through which she helps other victims of childhood sexual molestation. Today, Theresa is the host of Time with Theresa, an inspirational and entertaining talk show that airs in Denton, Texas.

Karl Garcia: Karl was 16 years old when his mother, Sandra, succumbed to a long battle with cancer. The young man had difficulty coping with such a tremendous loss and began using alcohol as a numbing device. After several years, he finally got help, but sobriety couldn’t ease the emptiness he felt inside. Karl eventually became a successful restaurateur, but his road to happiness didn’t begin until he met a little girl named Brooke, a cancer patient at a hospital where he was volunteering. He developed a friendship with Brooke and married her mother six years after Brooke passed away. Karl is now the pastor of Clear Creek Community Church in Clear Lake, Texas, where he ministers to approximately 1,000 people each week.

Bradley Blue: When Blue, as he is called, joined the Army in 1982, he had no idea how devastating the aftermath of war can be. In 1991, he fought in Operation Desert Storm in Iraq and saw things that most of us never see. After a particular gruesome battle, Blue watched as horribly injured children were processed. At the time, he didn’t realize the effect those children would have on his life. In 1993, Blue exited the military. He turned to alcohol to numb his pain and keep the nightmares at bay. Three marriages and 20 years later, Blue became suicidal. After hearing about Camp Hope on the radio, Blue was finally diagnosed with PTSD. Eventually, Blue became a counselor at Camp Hope, mentoring other combat veterans who suffer with PTSD.

Other stories in Rock Bottom and Back™ include a pastor whose sex addiction cost him everything, a former gambler who learned how to win at life through her losses, a member of a biker gang who now helps the homeless, the widow of an American hero who died in United Flight 93 on 9/11, a former drug abuser-turned-entrepreneur who gave up everything to run the New Orleans Mission, a famous actor and former addict who now motivates youth offenders, a former stripper who ministers to the homeless, and a film producer and former crack addict who now inspires people through film.
Through their combined efforts, these compassionate survivors have helped change the lives of thousands of people.
Many of the incredible people featured in the book are participating in our Speakers Bureau and are available for speaking engagements around the country.

We will host a movie premiere and book launch party in Houston in late September. We will post the date and time on our Facebook page at http://www.facebook.com/rockbottomandback and on our website.

Rock Bottom and Back™ is currently available at www.amazon.com and will be available in local bookstores Sept. 6, 2016. For more information or to book speaking engagements, please visit www.rockbottomandback.com or email haleigh@bicalliance.com.