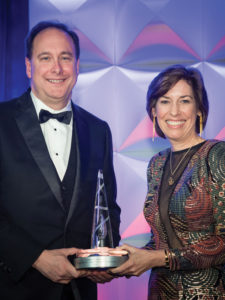 RNASA Foundation Chairman Rodolfo González welcomed the guests to gala, saying that “RNASA’s mission is to encourage, recognize, honor and celebrate U.S. space achievements from across the entire country and across all sectors.” The Clear Brook High School JROTC Color Guard presented the colors, followed by Thomas Glass, first year baritone from Houston Grand Opera, who sang the National Anthem a cappella.

After dinner, the program kicked off with a year-in-review film by Space City Films. John Zarrella, former CNN correspondent served as the emcee. “We are here tonight” he said, “in no small part to acknowledge the accomplishments of men and women behind the scenes. Tonight, we will honor many individuals who have made outstanding contributions to our space program.”

Cindy Steele, NASA Public and Stakeholder Engagement Division chief, presented the 2018 Space Communicator Award to actor William Shatner, best known for his role as Capt. James Kirk of Star Trek’s USS Enterprise, saying that “as a lifelong advocate of science and exploration, Mr. Shatner has inspired generations of young explorers.” Shatner accepted the honor via video, saying “the concept of space travel and exploration is one of great mysteries we humans can ponder. Space is the greatest mystery story of all.”

NASA astronauts Scott Tingle, Drew Feustel, and Ricky Arnold sent a congratulatory message down from the International Space Station to Lightfoot on receiving the National Space Trophy, telling him “we wouldn’t be on this amazing laboratory in space today if it hadn’t been for your complete dedication to our mission and for your effectiveness in the many roles you held over your career. Our community thrives because of your commitment to safety and mission success. Robert, congratulations on this prestigious and well-deserved honor.”

Ellen Ochoa, director of the Johnson Space Center, presented the prestigious 2018 National Space Trophy to Robert Lightfoot. In her introductory comments, Dr. Ochoa said “The many leadership roles that Robert Lightfoot has held and excelled at over his entire aerospace career made him the ideal person to lead NASA during the last 15 months.” While accepting the NST, Lightfoot said “…I really feel like I’ve been honored with the pinnacle of recognition in our business. This is the biggest award you could bestow on me, but really it is for this entire team and what we do. What we do every day makes a difference.”