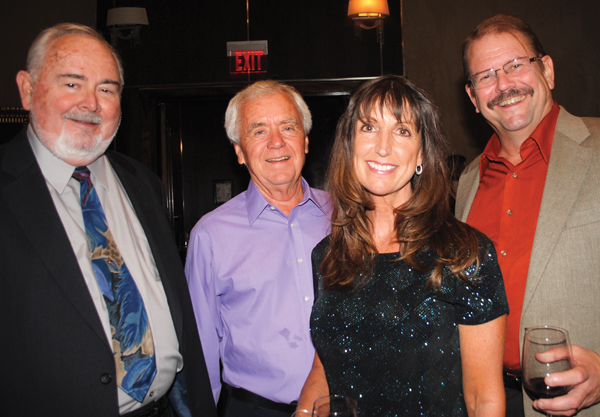 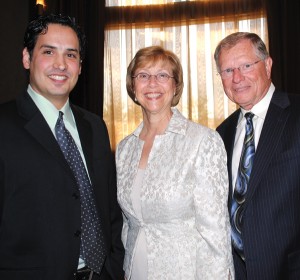 The $25,000, he told RNASA Foundation directors and guests at a dinner at Cullen’s Upscale Grille, coupled with $7,700 given the program for student T-shirts earlier this year, brings the total donation this year to $32,700. 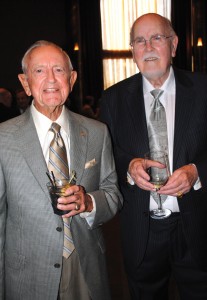 “With this generous RNASA donation, we are able to continue to positively impact the lives of young people here in the state of Texas as well as across the United States by offering NASA Aerospace Scholars,” Smith said after the presentation.

To date over, 10,700 students and educators have participated in the projects, she added.

As the winner of the National Space Trophy, Mike Coats was allowed to designate the beneficiaries of $10,000 of the gala proceeds and asked that $5,000 go to the Texas High School Aerospace Scholars program and $5,000 to WISH. 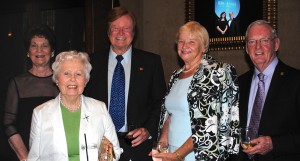 Marilyn and Glynn Lunney, right, stop to say hello to Carolyn Bennett, Betty Kraft and Bob Wren, from left, as they make their way through the RNASA crowd at Cullen’s.

Previous recipients of RNASA Foundation gala proceeds include Purdue University in West Lafayette, Ind., the University of Houston-Clear Lake, Space Center Houston, the U.S. Air Force Academy Endowment, Parks College of Engineering at St. Louis University, the U.S. Space and Rocket Center in Huntsville, Ala., On Wings of Eagles Foundation of Bloomfield, Colo., and the National Flight Academy adjacent to the National Museum of Naval Aviation in Pensacola, Fla.

The RNASA Foundation was founded by the Space Center Rotary Club in 1985 to organize and coordinate an annual event to recognize outstanding achievements in space and create greater public awareness of the benefits of space exploration, Gonzalez said.