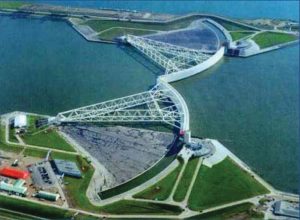 Ten years after the storm surge from Hurricane Ike devastated the Galveston Bay area, the U.S. Army Corps of Engineers announced plans Oct. 26 for what is considered a more ambitious version of the proposed Coastal Spine or Ike Dike, as the project to protect the region.

The Corps proposes building a 70-mile-long coastal barrier to protect the Texas coastline from future storm surge, at a cost of somewhere between $23 and $31 billion – considerably higher than the original projection, which was for a smaller project.

Four days later on Oct. 31 Moody’s Investors Service gave its stamp of approval, noting that the proposed system would protect a region that contributes 24 percent of the state’s gross domestic product (GDP) and is home to the largest manufacturing center in the United States along the Houston Ship Channel and to one fourth of Texas’ population.
Now the federal agency’s plan has come under attack.

Just as most of the area population was glad that at long last, something was going to be done to protect us came headlines that the folks over at Rice University’s Severe Storm Prediction, Education and Evaluation from Disasters Center were questioning the Corps of Engineers’ proposal, charging that the Corps’ information was out of date.

This did not sit well with Bay Area Houston Economic Partnership President Bob Mitchell, who worked for several years with UTMB Galveston Prof. Bill Merrell, Texas Land Commissioner George P. Bush and others trying to get the coastal spine project approved and financed.

“I think it is very unfortunate,” Mitchell said, “that Rice SSPEED Center has elected to attack the work that the Corps of Engineers has done in support of the ‘coastal spine’ and its ‘tentatively selected plan.’ There is a process that we go through in the form of hearings and written testimony that allows organizations and individuals to ask for clarification or to present ideas and changes they may think are important. “Rice SSPEED Center, in my opinion, should follow the process like the rest of us and try to be part of the team and not adversarial. This is not the time to see who can yell the loudest but a time to work together.”

Instead of being glad to finally see the federal agency come up with a plan to protect the area, SSPEED officials questioned the proposal, just as they had done after UTMB Galveston Prof. Bill Merrell proposed building the Ike Dike in 2009. Back then, instead of protecting homes and businesses in Galveston and the Bay Area communities with an Ike Dike to stop storm surge, the Rice SSPEED Center felt it was more important to protect industry along the Houston Ship Channel than those homes, schools and businesses in the Galveston Bay area. Finally, when they found everyone else favored the Ike Dike/Coastal Spine concept, SSPEED officials dropped their proposal.

But once the Corps of Engineers released its proposal, SSPEED officials found fault with the study. They said the proposal was incomplete as it did not account for the recent stronger storms and that the Corps information was out of date – assertions that were quickly disputed by the Corps. In addition to the Ike Dike, the Rice group proposes building a midbay seagate to protect the Houston Ship Channel and Harris County from storm surge. Their suggestion is much the same as their earlier proposal. And, just as before, they want to protect industry; and they don’t appear to care what happens to Kemah, Seabrook, Nassau Bay, Dickinson, El Lago, Taylor Lake Village, Clear Lake City, Friendswood, Santa Fe, Alvin, Pearland, Texas City, La Marque, League City, Webster and Galveston.

The Houston Chronicle also was upset with their actions, pointing out in an editorial that protecting the coastal region from the devastation suffered during Ike and Harvey “is far too important to let a fight over the path forward leach away the project’s necessary momentum before it ever has a chance,”

“It’s worth cheering that we’ve arrived at wide support for the coastal spine project, a system of floating gates intended to ward off storm surge….When was the last time officials from Houston, Harris County, the coastal region and the State of Texas have all been on the same page about spending (billions) in mostly federal dollars to help this region? How about never?”

“Critics and supporters of the Ike Dike should take care to help steer but not divert the ship that is finally on course to becoming reality,” the Chronicle added.

We agree. We’ve waited far too long for some action, and the Army Corps of Engineers has worked more hours than they can probably count to get this far. The SSPEED officials should submit their thoughts at one of the public hearings just like everyone else, instead of trying to make headlines and disrupt the process.

A series of six public meetings have been scheduled in November and December by the Corps for public comment on the proposal with the first held Nov. 27 in Port Lavaca. Others are planned in Seabrook, Corpus Christi, Port Isabel, Winnie and Galveston.

The Seabrook meeting will be held Tuesday, Dec. 18 at the Bay Area Community Center in Clear Lake Park from 5:30 p.m. to 9. The Galveston meeting will be on Wednesday, Dec. 12 in the Galveston Island Convention Center, 5600 Seawall Blvd., also from 5:30 p.m. to 9. For a complete list or information on how to submit public comment, visit the Army Corps of Engineers website, http://coastalstudy.texas.gov/get-involved/index.html

A final study is to be released in 2021 before sending it to Congress for funding.