Rhythms on the Bay

Hello Good People! Rick and the folks in the front office wanted to liven up your reading and add lots of fun stuff to the magazine – Including a favorite of many, live music!   When it’s time to sing or dance or rock, the Galveston Bay area has some of the best live tune makers around.  Here are just a few that have been filling our heads this month: 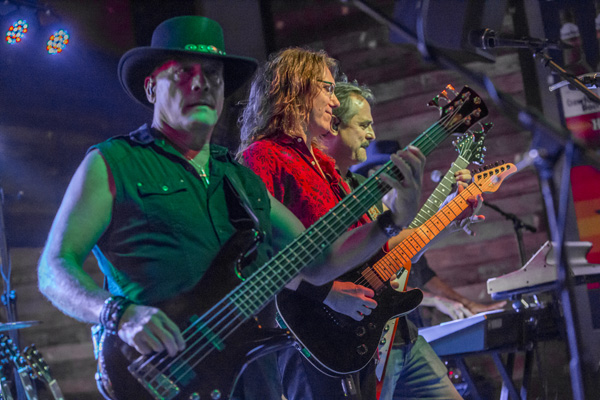 The Diamond Jack Band brought their pound-the-stadium sound to Jackie’s Brickhouse, thrilling the packed, but socially distanced, house with their classic rock anthems from the ‘70’s.  Featuring great hits like Steely Dan’s “Reeling in the Years,” and Rare Earth’s “I Just Want to Celebrate,” Diamond Jack grabbed the audience with their strong vocals and amazing instrumental work.

Diamond Jack is made of Houston-area live music royalty featuring former members of Rat Ranch, The Fab 5, and Madigan, to name of few of the legendary lineage.  They are: Paul Bryon (keys, guitar), Kent Newman (front), Rob Jacobs (lead guitar), Scott Madigan (bass) and Stacey Steele (drums). And all can sing…. Diamond Jack sports a two-lead guitar tandem of Newman and Jacobs, allowing the band to take on many of the classic rock numbers we rarely get to enjoy played out live.   When not pounding out the rock behind the kit, Steele is also an accomplished guitar/vocalist which is another treat. Bus Driver duties go to Scott Madigan on bass.

A quick mention on Jackie’s Brickhouse.  This place has never been afraid to reinvent and these days, adapting with changing times is more important than ever.  Yet throughout, they keep the Bay Area alive with their continuing strings of over the top charity events.   Shout outs include: Freedom Diesels and Wounded Warriors Benefit / Car Show.   It was an “amazing” turnout and everyone had a blast. This will be an annual event so stay tuned for the next date.

Back to the music. The guitar solo melted the strings during Eddie Money’s “Two Tickets to Paradise,” but they weren’t finished with capturing the crowd’s hunger for more.  A harmonica blasted out the rockabilly intro to the Ozark Mountain Daredevils, “If You Wanna Get to Heaven” calling dancers to the floor, with loud AM Radio quality.  Even those fighting the temptation to just get up and dance were moving in their seats.  Diamond Jack played a commanding rendition of the Styx’ song, “The Grand Illusion” about peaking behind the curtain of musician’s lives. Their tight, spot on harmonies triumphed during Beaumont native Edgar Winter’s, “Free Ride,” proving their musical proficiency with the vocal instruments as well as the stringed and percussive ones.

Available for private functions and bring-the-house down venues alike, Diamond Jack is one to watch and not to miss.  Follow their schedule at https://www.facebook.com/DiamondJackHouston and plan to catch their next ULTIMATE 70’s Arena Rock Tribute show. 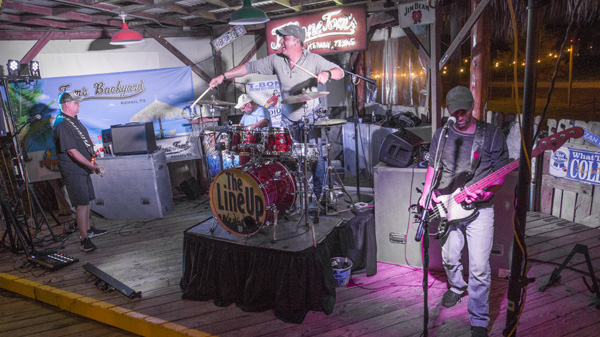 The Line Up at T-Bone Tom’s.

Popular on both sides of the Galveston Causeway, The Line Up lit up the night at T-Bone Tom’s with lively melodies, great guitars, and explosive percussion.  Willy Gonzalez, band leader, drummer, and lead vocalist started this group in 1989.  Even though some folks have come and gone, the bass player, Stacy Cook, and guitar player/singer, Jeff Pennington, count their memberships by decades.  This version of The Line Up also featured special guest musician, Ronnie Hernandez, on the congas/percussion and William Rasmussen, sound engineer running things from an iPad.  Willy also has a larger alternative version of this band, The Big Line Up, which includes a horn section, female vocalists, and more musicians.   On our list to hear!

Willy is a full-time musician, music promoter, and entrepreneur who has kept business going during the COVID-19 shutdown.  The Line Up bumped up their presence on Facebook by hosting viewing parties and worked with Pay Pal for an electronic way to receive tips.  As the restaurants have been opening up more, The Line Up is re-establishing itself as a definite must-have at local venues, including a standing gig on Thursdays at B. Jigger’s in Galveston.  Willy is encouraging people to start planning their private holiday functions now, especially office parties, so that folks can safely have well-earned fun at the end of the year.  They plan to make their annual appearances at Mardi Gras! Galveston 2021, a true lagniappe for the revelers and visitors of all ages.

A quick mention on the venue, please?   The good folks at T-Bone Tom’s played it by the rules throughout this C-19 mess.    Summer is winding down so be sure and mark T-Bone Tom’s on your places to stop by for good food, service & live music.

And what does The Line Up play?  Everything!  From Santana’s, “Black Magic Woman” to John Cougar Mellencamp’s, “Jack & Diane,” The Line Up burns up the covers and brings their audiences to their feet to enjoy the magnetic pull of their music.  They also have a special tribute using Jimi Hendrix’s guitar rendition of “The Star-Spangled Banner” for first responders which brings rousing support from the crowd. Follow them on Facebook to see where they will be next, or book them for your own celebration, callwillly@comcast.net. 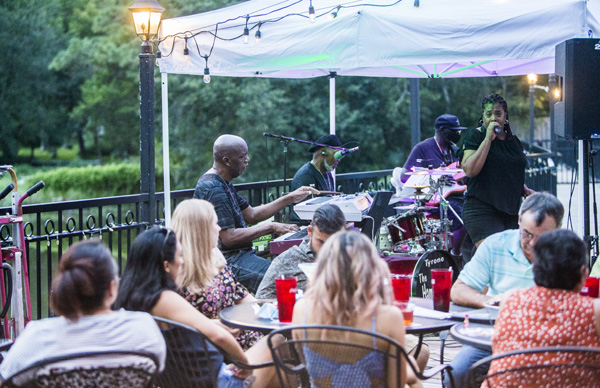 T N B Band at Marais.

When Tyrone Stewart was a young boy, his momma would have him sing for all the neighbors because he sounded just like Johnny Mathis.  All these years later, Tyrone is still providing a smooth sound in the local Galveston County group, the T N B Band.  The years of touring and performing, including opening for James Brown, has given Tyrone the right polish and charm to provide an evening full of musical joy.

Billing themselves as a 70’s Mo-Town Band, T N B also may slip in some jazz, rock, or even country to their nightly set.  Before becoming T N B, they were The TMB Band and still have recordings on YouTube and a presence on Facebook with that name.  Nicknamed the Three Men and a Lady Band, T N B features Scrap on the keyboards, Barrett on the guitar, Tyrone on drums/male vocals, and Lovely, the exciting female lead singer.

T N B makes a monthly appearance at The Plank, the pirate-themed bar at Marais in Dickinson.  Lovely has a powerful raw, down-to-earth sound that seduces you to stay and listen, especially on the 1995 Tracy Chapman hit, “Give Me One Reason to Stay Here.”

Watching Tyrone, Barrett, and Scrap weave music into an event is magic itself as they follow each other through crescendos and valleys, with just the right amount of pops and subtlety to upstage the sunset over the bayou behind them.

Watch for more appearances of T N B on Facebook and possibly some recordings of original music coming soon. 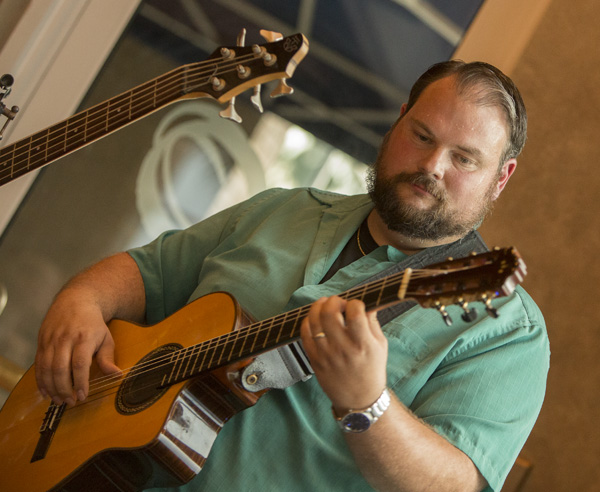 When asked to describe his musical style, Andrew Bateman laughingly confesses that he isn’t really sure.  Some have settled on Flamenco Fusion, a blend of classical Spanish guitar with modern modalities applied to the old and new.  However, it is so much more than that because Andrew builds a new arrangement of each piece very night as proven at a recent appearance at Opus Steakhouse.

Andrew records the first few bars he plays, and then he records another layer while the original bars provide the undertones.  He adds and adds to this, recording and playing, until multiple instruments are invisibly harmonizing together to create this unique and complex sound.  Andrew adds percussion by beating on the guitar, while he pulls each new melody or ornament or orchestration into place.  He uses his bass on a stand next to him for the depth.  The result is enticing, mesmerizing listeners as they absorb all the complexity designed and performed by one man, one amazingly talented musician. Need proof?   Look around at the audience as diners let their meals grow cold, captured by Bateman’s musical creations.

Andrew’s interest in the guitar started early in life when he found his mother’s old Silver Tone Guitar from Sears that had vacuum tubes in the amplifier.  His first goal wasn’t to master the complicated rest and free stokes of the Spanish guitar, but to learn to play tunes from the heavy metal band, Metallica.  Studying guitar in junior high led him to gigs in high school and becoming a music major in college.  Eventually, his life took a turn away from heavy metal and he mastered this new way of performing:  mixing live electronic recordings of classics, all types, with his live guitar, producing a new sound, a new genre, and a new masterpiece.  From John Fogerty to the Rolling Stones or Pachelbel’s Canon, each familiar song is adapted and arranged on the spot into soaring, soothing, and unique anthems.

Andrew boldly emphasizes that this ability he has is a gift from God.  He is very devout in his faith and enjoys participating in church praise bands and other religious worship.  Andrew defines a crowning moment in his faith when he was leading 35,000 people in Africa singing “Amazing Grace” all in their own native languages.  He is passionate about using his music as a ministry to others, including playing at nursing homes or spiritual retreats.

Andrew describes the last few months as a season of wilderness for him.  As with many full-time musicians’ experiences, the opportunities to play dried up as restaurants and bars shut down due to COVID-19, preventing them from performing.  He cleverly teamed up with local singer, Kelly Williams, and they livestreamed on Facebook to eager fans who were missing being out and enjoying music.  Andrew is finding some new gigs, but the pay is often less and the bookings farther in between.  However, Andrew is a man of vision and will reclaim the excitement of the not-so-long ago Downtown Houston appearances punctuated with guest shots on KHOU’s Morning Show.  In the meantime, follow Andrew on Facebook to see his upcoming events in neighborhood locales, weddings, guitar lessons, and private parties.  His free-flowing and dynamic improvisations will dazzle and impress you.   Avoid the rush and book Bateman for your upcoming holiday gathering, where intelligent conversation is being served.  Your guests will call you genius.

Over the ages, throughout nature’s storms, economic cycles, and again with a Pandemic, a robust resilience is rampant in these parts.  Common passions throughout are fabulous foods, great live music, and a community of strangers, neighbors, and friends always willing to pitch in.