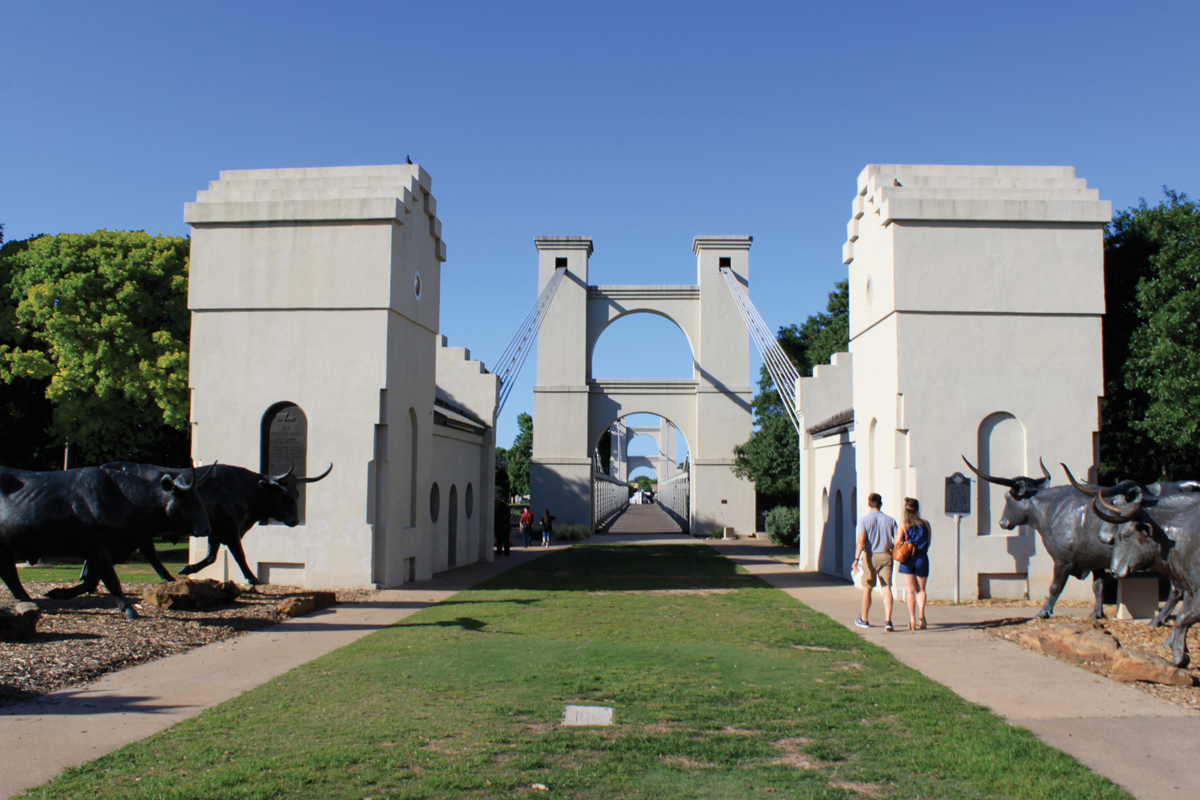 It had been a really hard day on the road.  I should point out that I hate driving.  I know—a strange affliction for a guy who wanders around Texas a lot just for fun.  On this day, I left Canyon, Texas, about seven in the morning and had driven all day.  It wasn’t too bad until I got to Eastland, but from there I was stuck behind a motor home going 20 miles per hour below the speed limit on a two-lane road.  For 40 miles, I could not negotiate a pass.  Every time I pulled out to take a peek, there was another car coming in the opposite direction.  It was frustrating.

Finally we came through a tiny town whose name I don’t even remember.  As we slowed for the only stop sign in town, I saw a series of parallel parking spaces on the right, all untaken.  I swerved hard to the right and raced through those parking spots to negotiate the pass.  Fortunately, there were no law enforcement personnel around and I got away with it.   Coupled with the countless previous attempts to pass, that slick move at the stop sign pushed my wife over the edge, but I figured it saved me more than two hours over the alternative, so I don’t regret taking the opportunity.

I finally arrived in Waco in the late afternoon.  I had come to do some photo work and I had a lot on the agenda.  I had only this afternoon to spend here and I had three sites I wanted to shoot: the Waco Mammoth National Monument, the spot where the Clintons burned the Branch Davidians, and the beautiful foot bridge across the Brazos River.   I checked into my hotel and then immediately went back out to begin work. I headed first for the bridge.

After studying the site and checking out the light levels, I made several photos of the bridge and the enormous bronze sculptures at its entrance.  I was fairly efficient and in less than half an hour, I had everything I needed.  I gave the photos a look over and was pleased with what I saw.  It was time to move on to the next site while I still had enough daylight to get something done.  But that’s not what happened.

Life is a non-stop parade of events and decisions.  Every step of the way we are presented with opportunities.  There are forks in the road, and at each one we have to decide, usually in short order, which way to go—which opportunities to accept and which to decline.  And, as Robert Frost points out in his poem “The Road Not Taken,” because “way leads on to way,” every decision we make sets us on a new path; one from which it is difficult, if not impossible, to back track should we later decide we would like to reverse the previous decision.  Once made, each of these choices puts us on the new path our lives will take from that point forward.

Many people look back on old decisions and wonder what would have happened if they had made the other choice.  Others go even further; they look back with regret.  “I should have made the other choice.”  But opportunities, once passed by, cannot be revisited again.  We have to move on from where we are.  As a result, as time goes on, the stack of missed opportunities grows until the pile becomes enormous, and for some people, that can be intimidating.  The regrets build.

But I think that few of us see the big picture, the full reality of the situation here.  Certainly, had we taken any of those opportunities when they presented themselves, our lives might have gone in a different direction.  And as a result of accepting them, we might have had other, new opportunities down the road that could have led to a better life—opportunities that we never even got to see because of earlier choices we made.  But there is another way to look at the issue.  Had we indeed made the other choice, we would not have had many of the opportunities we got to see as a result of the earlier decision we did make.  It seems to me, there isn’t much point in grieving over missed chances.  It all evens out in the wash.

Back in Waco, I found I just couldn’t bring myself to move on to my next destination.  I was still so tied up in knots from the hard drive that I needed to just sit awhile.  In the shade of an old oak tree on the bank of the river, I took a moment to sit at a picnic table and just relax.

That moment lasted a little over three hours and when I finally felt like moving on, it was nearly dark.  I would not be getting the other photos I needed on this day.

It would have been easy to look at the decision I made that day and think I really missed an opportunity.  Now, to get the photos I need, I’ll have to make another trip to Waco.  I passed on a chance and will have to pay a heavy price.  But I don’t see it that way.

Having a good, brisk sit at the river transformed me from nervous, irritable, and frankly, a general pain to be around, to a laid back, relaxed guy who was just enjoying a beautiful summer’s evening on the river.  To this day, my wife comments on how she sat there next to me just watching the stress melt away.  In her eyes, it was such an improvement over the grouch that first arrived in Waco that she was perfectly willing to spend three hours just sitting there.  But there was even more benefit gained by the choice I made.  The fact is, I was having fun, and after all, isn’t that what life is all about?  Today, it is clear I made the right decision.

When thinking about missed opportunities, it is easy to be pessimistic.  It seems almost logical to get down on ourselves for making the wrong choices.  That’s understandable.  Our lives at any given moment are nothing more than the sum total of all the decisions we made to this point.  But we also need to see the bigger picture. It is critical to always remember that it is also a missed opportunity not to idle away a few hours when the chance presents itself.