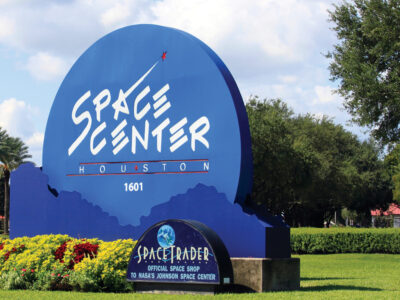 There is an iconic phrase from the movie Apollo 13 that we all know, and many of us often use: “Houston, we have a problem.” And of course we all know the first word spoken from the surface of the moon was “Houston.” The problem is, if we are being truthful, neither phrase is correct. They should have said “Nassau Bay.” That is the location of the Johnson Space Center.

Several years ago, I was at Space Center Houston for a Purdue Alumni party and fundraiser. Our host was the last man to set foot on the moon and fellow Purdue alumnus, Gene Cernan. The facility was closed except for our group and we were given access to a lot of things others don’t get to see. And each of them amazed me. The sheer size of the full scale copy of the space station, for instance, was awe-inspiring. Seeing the old Mercury program control room and the various rockets seemed almost like a fantasy.

I suppose learning about our space program’s early days would overwhelm most people. Just think of the minute technical details that all had to be just right to make the whole lunar project work. The engineers did it without computers—generally depending solely on slide rules. I think most people would marvel at the attention to detail and the rational, logical abilities of the people who made this all happen.

Not me. I was totally blown away by something entirely different—the creativity of it all. I was in awe of the imagination that made this all possible.

In 1961, in spite of the fact that we had yet to successfully put a man in space at all, President John Kennedy announced we would put a man on the moon by the end of the decade.
NASA got word of the impending announcement only about four weeks before the speech. The problem was, there was nothing even close to a plan for this enormous project, and there had to be a plan ready before the announcement. NASA engineer Bill Fleming (another fellow Purdue alum) was given four weeks to come up with a plan detailing “all facets” of the program to get us to the moon. The plan had to be ready in time for Kennedy’s announcement in September—an enormous assignment with a ridiculous deadline! Four weeks later, Fleming and his team submitted a report over 500 pages long detailing the overall plan, phases of the project, more than 1,200 tasks and a full budget for the program.

I think it is safe to say most people would begin a project like this by designing a rocket to go the moon, and their work would have been concentrated along those lines. But Fleming wasn’t thinking like most people. Instead of getting down to the rational, logical details of getting to the moon, he was much more imaginative. He saw the problem differently. He chose instead to divide the huge project into three separate phases, or missions: orbit the earth, circle the moon, and finally, the actual landings. Today we look back at this radical decision and we understand the beauty of it. First, it makes perfect sense given what had to be learned and what skills needed to be developed, and second, it is incredibly time-efficient because we can have people working on missions two and three even as we are just starting mission one. Time was the thing in shortest supply.

Then there was John Houbolt, who came up with the wild idea that a moon landing should involve three vehicles, not one. At the time, the idea most commonly endorsed was a science-fiction-like rocket that would launch from earth, land on the moon, then launch from the moon and travel back to earth. A vehicle that would escape earth’s gravity, travel all the way to the moon, launch a second time and then travel all the way back to earth would have taken both enormous amounts of hardware and fuel. It would have taken a rocket much more powerful than the available Saturn V to launch the payload necessary to do it in this more “popular” way.

Concerned first and foremost with weight, Houbolt asked the unusual question, “Why not leave the fuel for the return trip to earth up in the moon’s orbit?” Houbolt’s idea was called the lunar orbit rendezvous (LOR) concept. It meant a moon landing would require three vehicles: a Saturn 5 (three stage) rocket, a command module, and a lunar landing module.
His idea was considered so radical that one NASA engineer said “Houbolt has a scheme that has a 50 percent chance of getting a man to the moon and a 1 percent of getting him back.” Another said “His figures lie, he doesn’t know what he’s talking about” (thespacereview.com).

Looking back, both Fleming and Houbolt had ideas that we now can see make perfect sense. They are completely logical and we understand why they worked. But someone had to think of them, and logic clearly was less important in that process than imagination. Remember the comments of some of the more “logical” engineers about Houbolt’s plan.
The fact is, if we want a “complete” world we can’t have the “higher” trait (logic and reason) without first establishing its foundation—imagination. We often stereotype engineers as logic-based number nerds, and perhaps many of them are. But the fact is, details and numbers are useless until we have the “Big Idea.”

Were these two men any less rational/logical/technical just because they were imaginative? Clearly not. To truly be effective, to be someone like Fleming and Houbolt, we really need to excel at both.

Many of us tend to classify people into one of two groups, either as creative types, or detail people. But is there really such a clear distinction? While it may be true that some people seem to be better at the big picture, at finding creative solutions to problems, do these identifications have to hold true? We hear that people have an “orientation.” They are detail-oriented, or they are creative. They are rational and logical or they are imaginative. They are “left-brained” or “right-brained.”

Science has achieved so much in the decades since Apollo and yet still today, imagination is often overlooked in favor of the rational. We never could have gotten to the moon or achieved any of the other technological advances since then with reason alone? We must first conceive, then build.

Neither creativity nor logic are genetic gifts. They are developed skills. And both can be cultivated in the individual if we try. Obviously, it is best if we begin that work in childhood. But it is never too late to develop these skills in ourselves—if we really want to.

Left brain/right brain. Do we really want to go through life with half a brain?