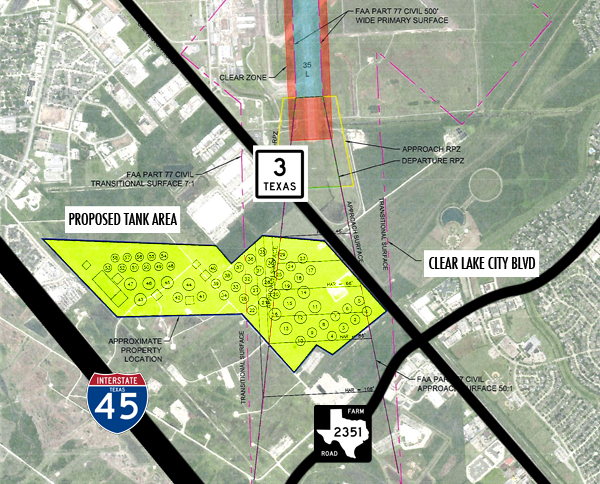 The proposed crude oil tank farm location is between Interstate 45 South and Highway 3 near FM 2351.

Adrian Garcia, former Harris County sheriff and a candidate for Harris County commissioner, Precinct 2, has called on Harris County Commissioners to put the brakes on a proposed, massive, dangerous new petrochemical tank terminal at the entrance to Clear Lake.

“I’m taking a stand against polluters who are making our families and children sick,” Garcia said. “It is reported that a Hurricane Harvey polluter, Magellan Midstream Tank Terminal in Galena Park, now wants to build a massive petrochemical tank terminal of 58 tanks at the edge of Clear Lake on land that flooded Horsepen Bayou so badly a car was swept off Highway 3, drowning the driver during 2015’s May rain event,” Garcia continued.

“Harris County needs to say NO.”

The land on which the company plans to put the crude oil tank farm is also near the Bay Knoll, Bay Glen and Sterling Knoll communities and in the path of the Ellington Airport runway.

Evelyn Merz, of the Houston Sierra Club, said: “It is crucial to evaluate the effect of a 58-tank farm facility on impervious cover and runoff in surrounding communities during storm events.

”Risks of water and air pollution spreading into residential areas have to be analyzed considering expected revision of 1% rainfall frequency, which will expand 100-year and 500-year floodplains. This location of a tank terminal is an area ripe for concern and local residents deserve an opportunity to review the proposal and  defend their interests.”

Marie Flickinger, South Belt Leader editor, called attention to the proposed huge tank development at Clear Lake’s front door, while the Houston Chronicle spotlighted Magellan’s Harvey “spill” of ½ million gallons of gasoline and 2 million pounds of air pollution in Galena Park. The Chronicle also reports there are permitting issues with that Magellan site, even as the company seeks permission to build another one between Highway 3 and the Gulf Freeway, north of Clear Lake City Boulevard.

Garcia expressed strong concerns about tank terminals leaking hazardous chemicals at multiple locations Precinct 2 and the associated health impacts on residents. At a minimum, he insists that before approval of new sites, tanks must be designed to not leak or shifted off foundations in major rain events. They should not be located in areas with flooding history or near residential neighborhoods and airport runways. And the public must be notified at the earliest possible moment when plans for such sites are being considered.

“Magellan caused massive pollution during Harvey, leaking half a million gallons of gas and over two million pounds of air pollution. It must not be rewarded with a new permit to double its number of tanks until they’re proven safe,” demands Adrian Garcia. “County officials can’t continue to ignore this. I’ll fight for Clear Lake and all Precinct 2 residents to not make same past mistake. I stand with local residents to stop the pollution.”

Residents can help stop the next Magellan mess from polluting the Clear Lake community and other communities, just like they stopped the Bayport rail line and kept “green spaces green.”