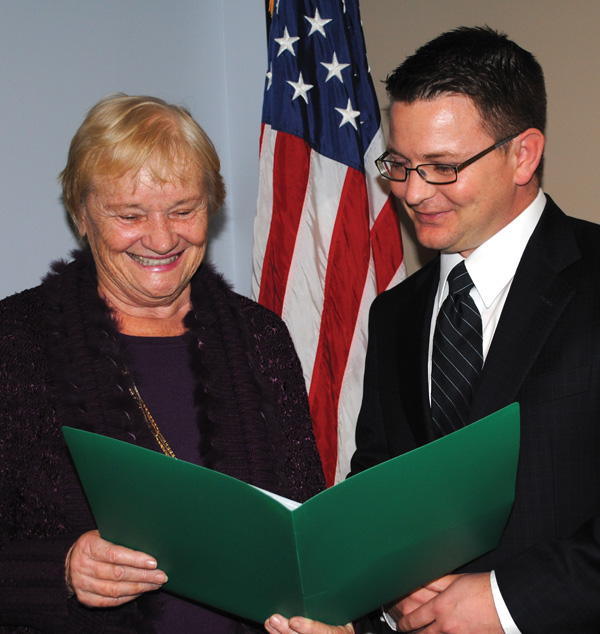 Harris County Commissioner Jack Morman goes over the list of Precinct 2 projects with Marilyn Lunney as he prepares to speak at UH-Clear Lake.

When Harris County Commissioner Jack Morman was running for the post back in 2010, he said he was accused of being an infrastructure commissioner.

“From a regional standpoint, we’re looking at a billion dollars in new construction to improve transportation in East Harris County.”

And, soon his office will be entering the design phase for four really big projects:

“These projects all take time, but everything important takes time. My goal is to get them done faster and more efficiently than anyone ever thought possible,” he told the audience at the Clear Lake Association of Senior Programs’ Distinguished Speaker Series at UH-Clear Lake Jan. 10.

Several Bay Area roads are due for resurfacing, he said. Among the projects are:

The Port of Houston also came in for kudos from the commissioner for its selection of Col. Len Waterworth as executive director, Janiece Longoria as commission chairman and the appointment of Col. John Kennedy, the former Nassau Bay city manager, to the commission.

Morman also feels the Port is moving in the right direction. “The commissioners deserve our support and assistance as they continue to build on the hundreds of thousands of jobs their efforts provide to the region.”

Not fun at first

While he is enjoying his job now, it hasn’t always been easy, he said, explaining that he had to initially lay off 99 employees and cut his budget $12 million to avoid deficit spending.

Today he oversees 373 employees, operates 49 parks, 11 libraries and 9 community centers, over 1,000 miles of roads,  a tunnel and a ferry. “And, I’m happy to report that the Precinct 2 team stepped up to the plate and did a great job with less for the last year and a half.”

As for taxes, no problem. Commissioner’s Court just recently adopted the same tax rate as last year’s, he said.