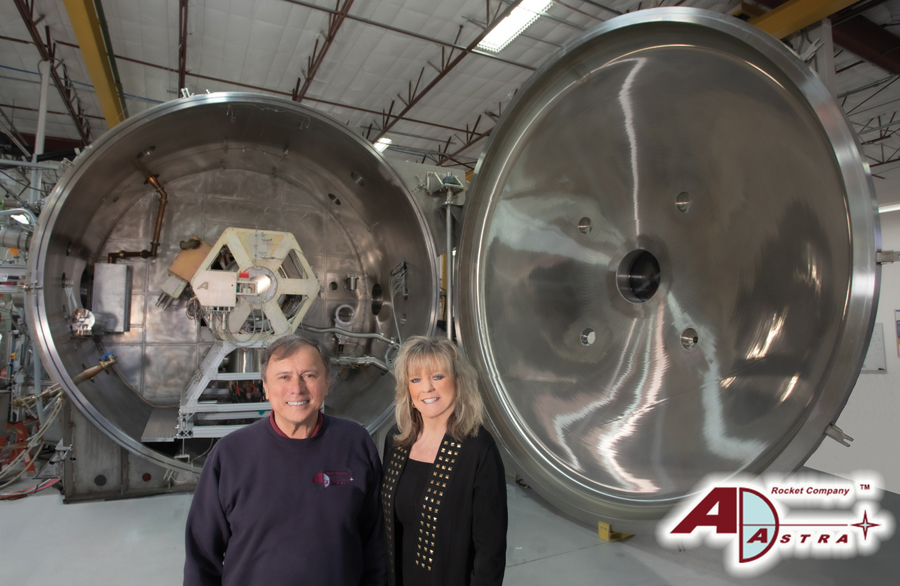 For the past 12 years, Webster has been home to one of the world’s most innovative aerospace firms—Ad Astra Rocket Company. Dr. Franklin Chang Díaz, inventor of the VASIMR® engine (Variable Specific Impulse Magneto-plasma Rocket), founded Ad Astra Rocket Company in 2005, after serving for more than 25 years as a NASA astronaut. Chang Díaz, a veteran of seven Space Shuttle Missions, credits his tenure as an astronaut and work at MIT in the late 1970s to developing the future of space flight—a high power electric rocket with plasma propulsion system.

Chang Díaz and his team have persevered in their development of the VASIMR®—a high power electric rocket engine, despite being labeled “radical” and despite having to continuously raise private funding to maintain the pace of development for the technology. The in-space transportation market that requires fast human transport, lunar resupply logistics, orbital debris removal, satellite refueling, servicing, and repositioning, and rapid robotic deep space operations is the perfect niche for Ad Astra Rocket Company’s invention.

Whereas chemical rockets require massive amounts of propellant that constitute most of a ship’s mass, Ad Astra’s VASIMR® rocket engine requires 1/10 of the propellant. The engine operates on electricity—from solar arrays or panels—that heat and accelerate a plasma—a superheated gas at millions of degrees. The rocket structure is insulated from the hot plasma by magnetic fields that also direct the plasma as it is ejected from the engine—creating thrust for the spacecraft. The VASIMR® is ten times more fuel efficient than chemical rockets, which means more payload per flight and reusable components. Also, in the future, when nuclear power is available in space, the VASIMR® engine could propel humans on shorter transits to Mars and beyond.

The VASIMR® has been undergoing rigorous testing since its inception and has passed with flying colors. Through a decade of research, Ad Astra Rocket Company has carried out this development without government funding, with more than $36M in private investment, and has brought the engine from a technology readiness level (TRL) of 2 to nearly 5. In 2015, a $9M NASA partnership contract was awarded to help complete the TRL-5 activities.

Ad Astra Rocket Company has successfully completed on budget and on schedule more than 30 milestones in fulfillment of this contract. However, there are three milestones remaining: first, a demonstration in vacuum of the VASIMR’s® new power processing unit (PPU), an advanced radiofrequency power source built for Ad Astra by Aethera Technologies Limited of Canada with partial support from the Canadian Space Agency; second, a five-to-six hour continuous firing of the VX-200SS, the VASIMR® engine test article operating at 100 kilowatts; and third, a long duration (100 hour) continuous firing of the VX-200SS at 100 kilowatts.

Ad Astra expects to complete these milestones before the end of the NASA contract in June 2020. Then, Ad Astra expects to “graduate” to TRL-6 and obtain additional contracts that will help the company finish the design, construction, and testing of its first space flight prototype, called the TC-10. Once proven in space, the VASIMR® engine will officially enter the commercial sector and begin to revolutionize space transportation and space logistics—the way people, services, and supplies move in space.