The past few weeks have been busy days for the Bay Area Houston Transportation Partnership, starting with a visit to Houston City Hall, where Mayor Sylvester Turner, Councilman Dave Martin and City Council passed a proclamation honoring BayTran for its 25 years of service to the community.

Then after luncheons featuring Galveston Mayor Jim Yarbrough and Texas Department of Transportation District Engineer Quincy Allen, Port of Houston Executive Director Roger Guenther presented the State of the Port Address, drawing one of the largest crowds of the year. 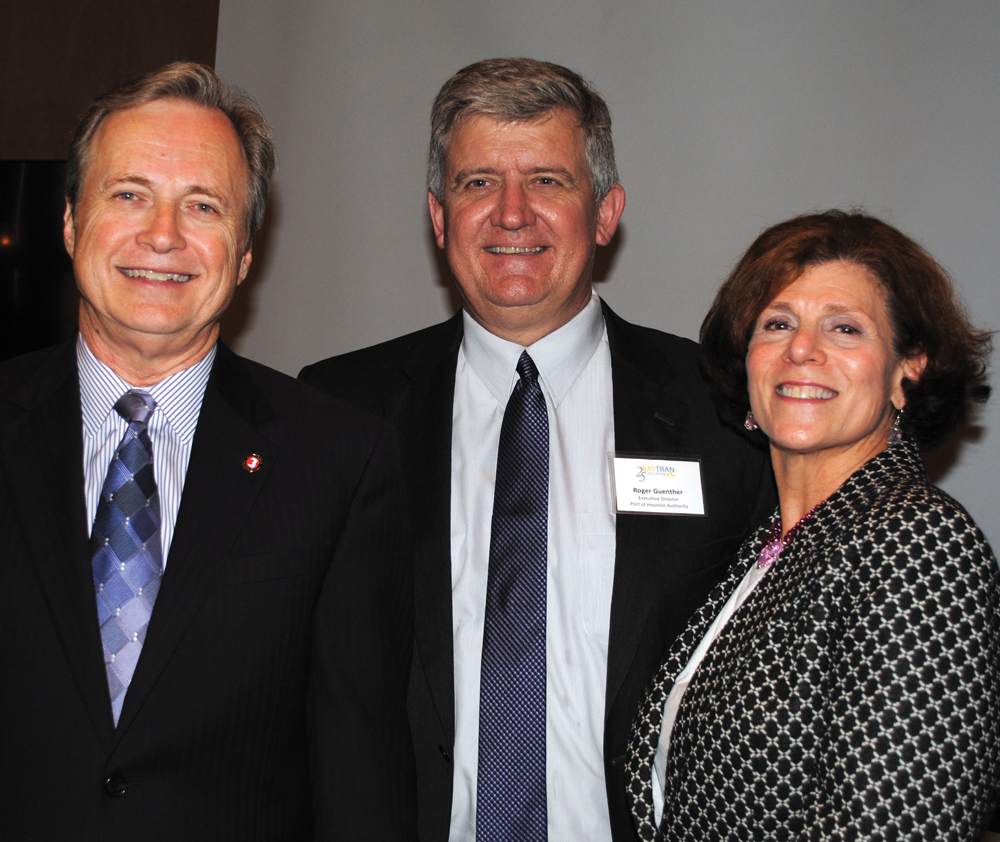 Port of Houston Executive Director Roger Guenther, who lives in Pearland, center, wears a big smile as BayTran President Barbara Koslov and BayTran Chairman David Hamilton welcome him to the State of the Port Luncheon.

Guenther, who was introduced by Port Commissioner John Kennedy, told how the Port had grown, creating 148,000 new jobs since 2011 and that it has an economic impact of $265 billion or 16 percent of the state’s gross domestic product. This year it set a new record, he said, handling two million containers and solidifying its position as the leading container port on the U.S. Gulf Coast.

The Port is No. 1 in foreign tonnage in the country and second in the U.S. in total tonnage – moving 200 million tons of cargo through the Port each year. “We also had a record day in January with 5,000 transactions in one day.”

As for the Panama Canal, the Houston Ship Channel dredging project is done and the Port is ready for the big boats to come calling. Then he added, “we’re really proud of what we’re doing.”

At the close of the luncheon, it was announced that BayTran President Barbara Koslov would soon be leaving her post to join the staff of Harris County Judge Ed Emmett.

« News Nuggets
The Winds of May »
Bay Area Houston Magazine