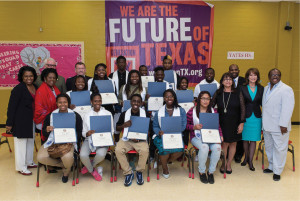 Partners in Maritime Education among select initiatives honored by Harvard

The Port of Houston Authority’s (PHA) Partners in Maritime Education initiative has been gaining fans among industry and educators since it was launched six years ago, and now the signature program has earned national recognition.

The initiative is among 124 programs across the country to be recognized by the Ash Center for Democratic Governance and Innovation at the John F. Kennedy School of Government, Harvard University, as part of the 2015 Bright Ideas program. Bright Ideas acknowledges entities representing all forms of government—school districts, county, city, state and federal agencies and public-private partnerships that “are on the forefront of innovative action.”

The PHA launched Partners in Maritime Education in 2009 as a means to address the growing need for skilled maritime workers by organizing maritime academies at four area high schools. The program seeks to introduce students to possible careers in maritime industries and has also helped to create two- and four-year degree programs and training at colleges, junior colleges and community colleges to provide graduates from the high school program an opportunity to continue their maritime career training.

“Industry involvement is important to the success of the Port of Houston Authority’s maritime education program,” Port Commission Chairman Janiece Longoria said. “At the port, every industry stakeholder from the U.S. Coast Guard to the barge operators to the Houston Pilots were asked for their guidance and input as the program was developed and as it has progressed.”

This year marks the fourth cohort recognized through the Bright Ideas program, which is part of the broader Innovations in American Government Awards program. In order to be considered, programs must be currently in operation or in the process of launching and must be administered by one or more governmental entities. The program is open to non-profit, private sector and union initiatives if they are operating in partnership with a governmental organization. Bright Ideas are showcased on the Ash Center’s Government Innovators Network, an online platform designed to be a venue for policymakers to share public policy solutions.

“The Bright Ideas program demonstrates that often seemingly intractable problems can be creatively and capably tackled by small groups of dedicated, civic-minded individuals,” said Stephen Goldsmith, director of the Innovations in Government Program at the Ash Center. “As exemplified by this year’s Bright Ideas, making government work better doesn’t always require massive reforms and huge budgets. We are seeing that, in many ways, an emphasis on efficiency and adaptability can have further-reaching effects than large scale reforms.”

The category in which Partners in Maritime Education was recognized focuses on programs that seek to expand education and career development for populations that are traditionally largely ignored by the system as a whole, including people with special needs and economically disadvantaged children and adults.

Other programs recognized in the same category as the PHA initiative include the Mentoring Program and Youth Directors Council organized by the city of Miami Beach, Fla., which provides a safe place for at-risk kids to spend their after-school and weekend hours and gives them access to study resources and SAT preparation materials, along with career search training.

Another program recognized by the Ash Center is the Le Fetauo Samoan Language Center in Hawaii, a program that encourages Samoan youth and teaches them to respect their culture while creating investment in their families and the larger community.

Partners in Maritime Education has helped to initiate several educational efforts, including the establishment of the transportation management and security degree program at Texas Southern University, the first degree program dedicated to transportation management and security in the Houston area and the first such program established at an historically black college in the U.S.

The PHA also partnered with other schools, including Houston Community College, Lonestar College Cy-Fair, San Jacinto College, Texas A&M University at Galveston and the University of Houston on establishing degree programs focused on maritime training. The effort has also established maritime curriculums at several area high schools, with a heavy concentration in the La Porte and Pasadena school districts.

“In a short time, the maritime academy program in area high schools has become one of the premier maritime education efforts in the U.S.,” Longoria said. “San Jacinto College is now building a maritime education campus contiguous to the Port of Houston.”

Applications from students interested in participating in the PHA’s Summer Internship Program are being accepted through the end of April. The internship program began in 2008 and is designed to provide qualified candidates an opportunity to gain real world experience in their field of study.

The 10- to 12-week paid internship provides candidates in a variety of study areas, including construction management, engineering, security, accounting and finance and maritime transportation, a chance to work alongside some of the most respected people in their fields.

To qualify, students must be enrolled in a two- or four-year college or university or be a recent graduate of a four-year college with plans of continuing their education to earn a master’s or higher degree in a field related to the work area of the internship. For more information on the Summer Internship Program, visit Portofhouston.com.