Police give pointers on how to survive shooter 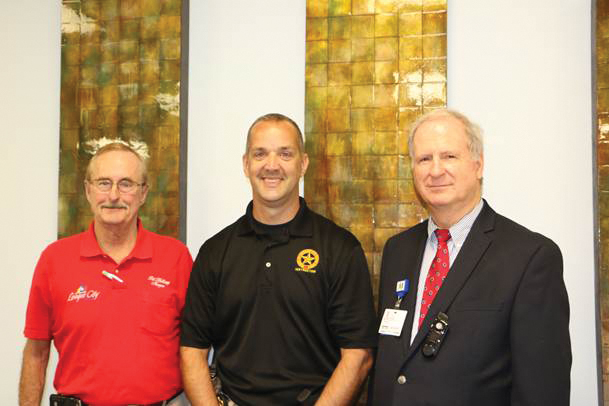 League City Police Lt. Cliff Woitena, center, accompanied here by League City Mayor Pat Halliey, left, spoke recently at two local seminars to educate the public on how to deal with an active shooter. The first, on keeping sacred spaces safe, was hosted by Houston Methodist St. John Hospital with about 60 clergy and religious leaders attending and was led by the Rev. Richard Maddox, right, director of spiritual care at St. John. The second at South Shore Harbour Resort, and hosted by the Clear Lake Area Chamber and the Bay Area Houston Economic Partnership, open to the public.

With shootings becoming a part of our lives most every day and many losing their lives to deranged gunmen in mass shootings, several local organizations decided to offer help to the frightened public – setting up two public seminars.

Clear Lake Area Chamber and Bay Area Houston Economic Partnership hosted one in the South Shore Harbour Resort’s Marina Ballroom while Houston Methodist St. John Hospital hosted another to help both the public and the clergy deal with the problem. The hospital hosted nearly 60 clergy and religious leaders, representing 30 local churches, mosques, temples, and synagogues, for an informative session on “Active Shooters in Sacred Spaces.”

League City Police Lt. Cliff Woitena conducted both seminars, offering advice on what to do in case one is confronted with an active shooter. “The problem is everywhere,” he said.

“We can’t prevent it, but we can prepare for it,” he said, pointing out that it is important to calm down, to take a deep breath and try to relax – no matter how hard that may be. This helps get our brains functioning better, improves our stress response, he explained.

Some things to remember if you find yourself in a place with an active shooter: Run, hide, fight. Forget your personal belongings – they can be replaced. If you hear noise that sounds like firecrackers, it isn’t. People don’t shoot off firecrackers in schools, malls, offices. It’s likely gunfire, and, if you can’t get out safely, find a hiding place. Get behind a large object. Turn out the lights and try to stay calm.

Most likely places of occurrence are 1. Businesses 53 percent of the time; 2. Educational facility, 24 percent;  3. Outdoors, 13 percent; and Other, 12 percent.

“You need to be prepared; you need to have a plan. It takes the police an average of three minutes to get there,” Woitena said, “and they want you to make the best use of your time while they are on the way.” Playing dead may work one time, but is not the best way to save your life, he added. “Don’t hide and hope under a desk either.”

Situational awareness of surroundings is the key. See where the exits are if you are in a large facility – a mall, a school, a supermarket or an office building. If you’re in a room, lock the door, put something against the door, turn off the lights, get out of sight and turn off your phone.

And remember: first responders are not there to help the injured; they are looking for the shooter. Just be patient. Help will arrive. You can survive.

“And, if by chance you are shot, don’t give up. You don’t have to die. Make a decision to live,” Woitena urged. “And, mostly likely you will.”