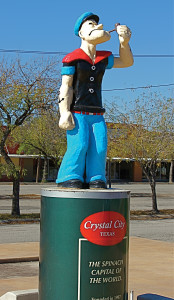 When I was a kid of about seven or eight, I wanted to be Popeye. Since I was smaller than everyone else, not much of a fighter, and frankly, a bit wimpy, I believed life would have been a lot easier for me if I was big and strong like Popeye. Since spinach caused the transformation in him, I just knew that if I ate enough, it would happen for me, too. In my effort to achieve that goal, I craved spinach and could easily eat an entire can myself. My parents reminded me that kids hate spinach, but their words didn’t change things; I still wanted to eat it three meals a day. It wasn’t until decades later that I realized I spent my early grade school years living with two personalities—the weak little guy the world saw, and the one I had in my mind and believed was the real me—Popeye Junior.

Standing in front of the statue of Popeye in Crystal City a few months ago made me remember those days. Crystal City proclaims itself the Spinach Capital of the World and so it seems only fitting that there be not one, but two statues of Popeye in town. As I looked up at one, I remembered back to when I was at that young age and first realized I had “multiple personalities;” not of the clinical disorder magnitude—more like different, antagonistic sides to my nature.

As I moved into later grade school, I picked up a yet another “me”—sort of a western cowboy/Indian. I remember reading about the Sioux in fifth grade and being fascinated by the lifestyle they led. The great outdoors and horses…they were always my dream.

Sometime in high school I picked up another side—the beach bum. Growing up in northern Indiana, just a few miles from some of the prettiest beaches in America was an influence I’m sure. Also by this time, I had grown to be considerably bigger and stronger than most of my classmates, so I had no further need for Popeye Junior. He went by the wayside.

And so it went for several decades with personas coming and going until finally, decades later, the turmoil subsided and I settled comfortably into a collection of personalities that I have learned to live with. Each has its own unmistakable traits that allow anyone around me to quickly determine what “mode” I am in—just look at the clothes I am wearing or hear the music I am listening to. My students always are surprised when I come to work dressed very differently from what they see as my “norm.” Some personalities are just too hard to hide.

Sometimes I think it would be nice to be consistent—to be the same guy all the time. But apparently that is not realistic. I decided I would be satisfied if I could just control which me was showing at any given time. Even that turned out to be a lot harder than I thought. Before I go to class or meet people for work purposes, I have to sit alone and get myself pumped up. I have to convince myself that it’s show time—time to bring out the persona that is appropriate for the situation.

I know what you are thinking. “Quit whining. Everyone has that problem.” And you’d be right of course. I’m sure everyone has at least two, the professional persona and the person they really are, and most people have more than that. Nearly everyone negotiates the transition smoothly every day, so how hard can it be?

Maybe I’m just lazy, but for me, it is hard work. But more important than that, having to manipulate my personas to match a situation just doesn’t feel honest. I spend a great deal of effort trying to project a “me” that is not who I am at the moment; I try to be something I’m not. And that got me thinking—there are a lot of people who make this the defining characteristic of their lives.

While most of us go about trying to match the various sides of who we are to the roles we play in life, I can’t help but think of those who try to force themselves to project a persona that is not even remotely close to who they are. I tried that once myself. Right out of college I did a stint selling advertising for a radio station. I hated every second of it. I dreaded getting up in the morning and my job performance was dismal as a result. No amount of experience, or money, was ever going to make me suited to that job. And yet, there are people who do exactly that their entire lives. They work at jobs or run with groups of people that do not suit who they are. They try to convince the world, and maybe even themselves, that they are something they’re not.

Why do we do this to ourselves? Whether it is my multiple personas or the guy who goes through life pretending to be someone he isn’t, why can’t we just be who we really are at this, and every moment in time? Am I any less effective as a professor because I am wearing jeans and boots today rather than a tie? (Okay, I guess maybe I am a little less successful teaching Plato when my mind is on Luckenbach…)

It seems to me the real question for all of us is how did we get ourselves into this position in the first place. We assign ourselves roles that we must play, and for each role, we have to assume a different persona. An upper-level manager at work has to be a very different person than the husband and father he becomes when he walks in the door in the evening. And then there are those times when he goes “out with the guys;” that requires him be yet another person entirely.

As a result, we expend a great deal of time and effort trying to fit our naturally square pegs into life’s various round holes. Life is complicated enough without adding impersonation to the list of critical skills. If I have to be someone I’m not just to be able to fulfill the roles I’ve assigned myself in life, perhaps I should be asking if I’m choosing the right roles. And if the answer is no, it is important to understand, and to truly believe, I can change those choices any time I want. I’m not saying it will be easy, but with a can or two of spinach, I think it is doable.