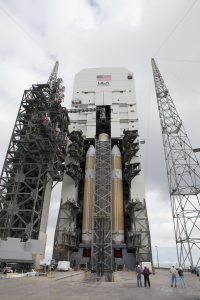 NASA’s new Orion spacecraft and the Delta IV Heavy rocket that will carry it into space are at their penultimate stops in Florida on their path to a December flight test.

Orion was moved Sunday, Sept.29, out of the Payload Hazardous Servicing Facility at NASA’s Kennedy Space Center in Florida and the Delta IV Heavy rocket, built by United Launch Alliance, made its move Tuesday night, to nearby Space Launch Complex 37 at Cape Canaveral Air Force Station. It was raised Wednesday from the horizontal position into its vertical launch configuration.

“We’ve been working toward this launch for months, and we’re in the final stretch,” said Kennedy Director Bob Cabana. “Orion is almost complete and the rocket that will send it into space is on the launch pad. We’re 64 days away from taking the next step in deep space exploration.”

Orion now is ready for the installation of its last component — the launch abort system. This system is designed to protect astronauts if a problem arises during launch by pulling the spacecraft away from the failing rocket. During the December, uncrewed flight, the jettison motor, which separates the launch abort system from the crew module in both normal operations and emergency, will be tested.

The rocket’s three Common Booster Cores were tested, processed and attached to each other to form the first stage that will connect to Orion’s service module.

Following its targeted Dec. 4 launch, the Delta IV Heavy will send Orion 3,600 miles above Earth to test the spacecraft’s systems most critical to crew safety. After orbiting Earth twice, Orion will reenter Earth’s atmosphere at 20,000 miles per hour, generating temperatures near 4,000 degrees Fahrenheit, before it splashes down in the Pacific Ocean.

Orion is being built to send humans farther than ever before, including to an asteroid and Mars. Although the spacecraft will be uncrewed during its December flight, which is designated Exploration Flight Test-1, the crew module will be used to transport astronauts safely to and from space on future missions. Orion will provide living quarters for up to 21 days, while longer missions will incorporate an additional habitat to provide extra space.

For information about Orion and its first flight, visit www.nasa.gov/orion.