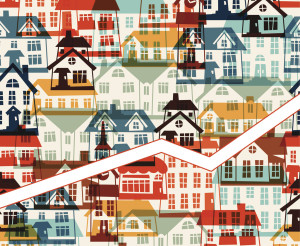 After a slight dip in February, home sales in Bay Area Houston are inching upward

As the rest of the country slogged through the economic downturn of 2008-‘09 that included the bursting of the so-called real estate bubble, the conventional wisdom was that the Texas economy, thanks to its heavy reliance on the then-robust oil and gas sector, would emerge largely unscathed.

While Texas residents on average didn’t suffer as badly as people in other parts of the country, there was always a sense that eventually the laws of economics would catch up with the Lone Star State, and that day seemingly arrived in February when the Houston Association of Realtors’ (HAR) monthly home sales report indicated the area saw its first decline in home sales in over six months. The report indicated that limited housing inventory, rising home prices and a drop in oil prices contributed to the 5.8 percent drop in single-family home sales over the previous year’s figures.

The housing market in the Bay Area Houston region was not immune to the dip in sales, and Pam Archer with RE/MAX Space Center, says the drop was not entirely unexpected.

“Our numbers reflected the same thing we were seeing in Houston, but on a smaller scale. We saw a dip in activity in terms of the number of showings of properties in February,” said Archer, who has worked as a realtor in the region for 20 years. “There was some concern that it had to do with oil prices, but it might have been simply a market phenomenon that would correct itself and we did see the numbers improve for March.”

Just as quickly as the home sales figures dropped, they rebounded in March, with the HAR report indicating sales rose 3.8 percent over year-ago figures, as many buyers snapped up newly listed homes before they ever had a chance to replenish the local housing inventory.

In the Clear Lake area, there were 94 homes sold in March compared with 73 sales in March 2014 and the average price increased from $237,000 to around $265,900 this year. Other areas of the region saw similar increases.

But even as more people are looking to buy homes, Archer says there remains a dearth of available properties.

“Yes, we’re starting to see more activity in terms of putting homes on the market, and when the inventory edges up it allows for more sales,” Archer said, “but the inventory has been the lowest I’ve experienced in my 20 years in the market. The last figure I saw was that there was 2.8 months of inventory and that’s very low. We’re starting to see a bit more listings, but we’ve got a long way to go before we get back to what I would call a more balanced market.”

HAR Chair Nancy Furst agrees with Archer’s assessment and says while realtors were certainly happy to see sales figures increase in March, the market is still in a somewhat volatile state.

“It was great to have sales back in March after February’s decline, but in order to satisfy the long-term needs of the Houston housing market, we need to see substantive growth in inventory levels, which remain at record low levels. Typically, a five-to-six-month supply of homes is indicative of a balanced market,” Furst said.

“I’ve always considered this area to be a micro-economy. A lot of Houston is controlled by larger companies and industries, but here we have quite a diverse economy,” Owens said. “We have lots of refineries that thrive on lower gas prices because it’s easier to produce plastics and easier to ship products inland. We also have NASA, healthcare industries and many smaller businesses.”

Owens has seen an increase in activity with regard to home buyers, but even that increase is a double-edged sword for realtors who continue to struggle to find available homes to show to prospective buyers. He says homes that were difficult to sell in 2013 and ’14 don’t last a week on the market now once they are listed.

But while the current market is a tricky one to navigate for buyers and sellers, Owens, who began selling homes in the region six years ago, says his perspective makes him optimistic about where the market is headed.

“I started at a unique time right after the mortgage/housing crisis, which hurt everybody a little bit and constricted lending and increased supply,” he said. “Then right after that, (Hurricane) Ike hit and really hurt the area, so it was the lowest point in the market in over a decade. It’s been an upward climb since then. Some called it a bubble but, realistically, it’s just getting back to prices from 10 years ago. During the downturn in 2008 and ’09 people lost valuations, but it wasn’t like in other areas of the country where people lost 50 percent or more of their home values.”

The lack of housing inventory has a ripple effect on the market, Archer says, because it not only affects individual buyers and sellers, but home builders as well. She says the area is seeing an upturn in new construction, particularly on the Galveston County side, which is a welcome development because the low inventory created a market in which home builders had little incentive to build new homes.

“Around Clear Lake itself, we’re seeing an increase in first-time buyers looking to buy in the $150,000 range and for a while those were depressed because that’s where we saw a high percentage of foreclosures, but that’s a thing of the past,” Archer said.

Owens says areas like Bay Forest that feature older homes built in the late 1980s are witnessing a re-birth of sorts in terms of home values, while developments like Tuscan Lakes and MarBella have become increasingly popular. He says the Bay Area region features a healthy mix of home values, ranging from around $100,000 upward to over $1 million, but he says the $300,000 to $400,000 range is the most popular segment in the current market.

The consensus among realtors seems to indicate that the current rise in average home prices will continue in the region over the rest of the year, but a significant rise in inventory won’t happen overnight.