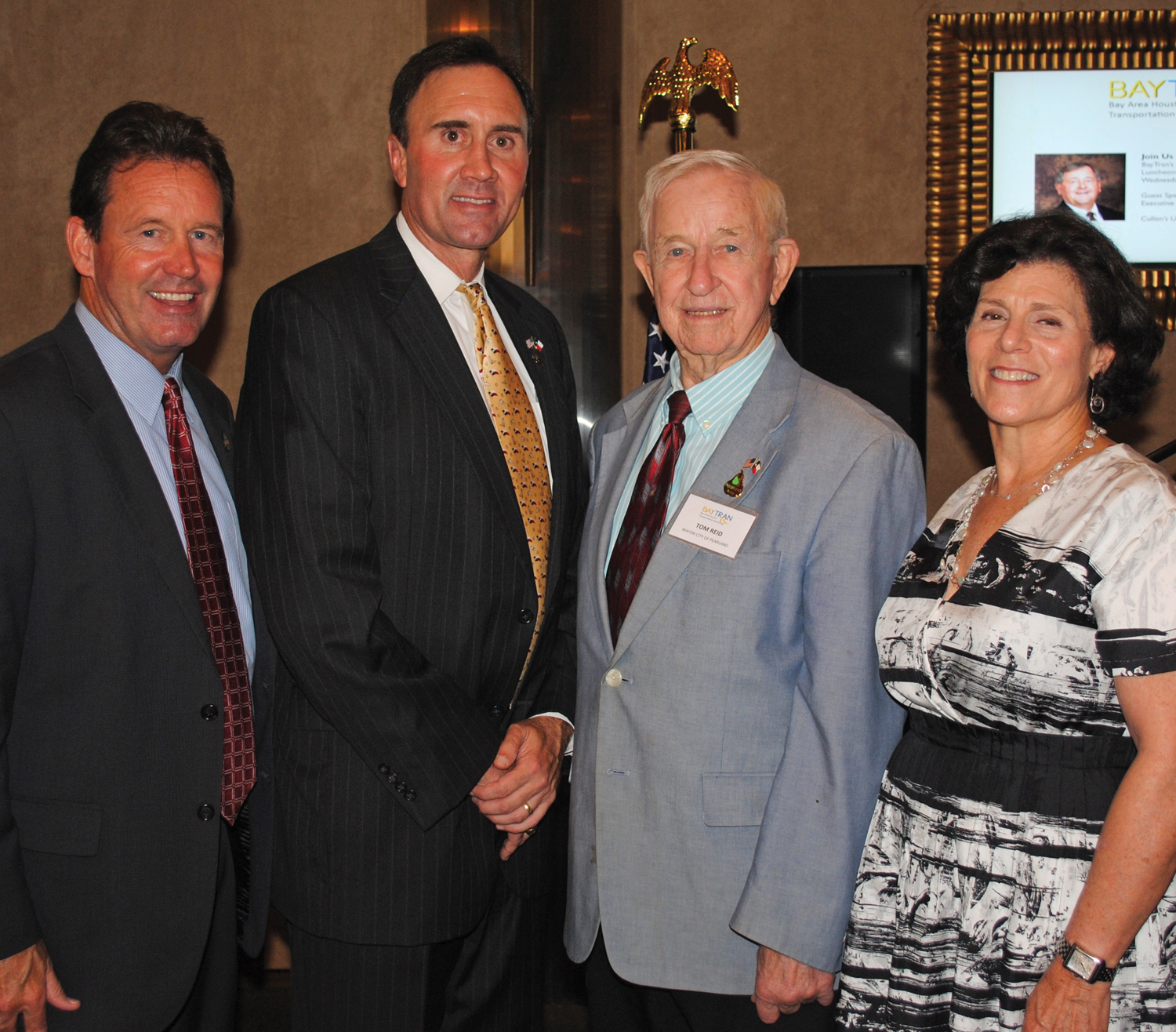 The Texas economy may be soaring, but not so its transportation system. In fact, Congressman Pete Olson says, “getting our common sense share of federal highway dollars is always an issue.

“The best, most concise image of our highway problems was Governor Abbott’s campaign ad, where he passed a pile of cars in his wheelchair while saying ‘A guy in a wheelchair can move faster than traffic on some roads in Texas,’” Olson told Bay Area Houston Transportation Partnership members at their August luncheon at Cullen’s Upscale Grille.

Employers lose productivity when employees are stuck in traffic, he said, blaming much of Texas’ problems on Congress’ failure to be fair to Texas when doling out transportation dollars, remembering back to his Clear Lake High days when the state received about 45 cents for every $1 it paid in and how today Texas still only receives a little over 90 cents for each $1 paid in. “We’re called a ‘donor state.’

“Meanwhile, Alaska is getting $4 for every buck they send to D.C. for roads. Alaska is called a ‘donee’ state. It has just 1,082 miles of federal highways while one Texas highway, I-10, covers 879 miles with a heck of a lot more traffic. Our problem in changing this insanity is that we are one of four donor states in America and 4 vs. 46 usually doesn’t work well if you’re one of the 4 in D.C., especially in the Senate, where Alaska has the same two votes we have.”

Texas’ problems with the Highway Fund don’t end with the donor issue, he continued. “The fund gets its money from the national gasoline tax – 18.4 cents per gallon. Cars are getting more miles … per gallon … and more fuel efficient cars use less gas, which means less money for transportation.

“There is no easy fix,” the Sugar Land congressman said. “Folks talk on both sides of the aisle about increasing the federal gas tax, but that’s a non-starter for me. Until this donor state insanity is ended, there’s no way I’ll vote for more of our money going to others. I doubt the votes are there to pass a tax hike, but I’m keeping my eyes and ears open.”

For those reasons and others, Congress hasn’t been able to pass a long-term highway bill but just a series of short-term extensions, he explained. One – a six-year highway bill that passed the Senate — is in the works, but probably won’t come before the House until Halloween, Olson said.

“Any longer term highway funding agreement must give the states the primary power. With D.C. on the hook for a national debt that’s about to soar to $20 trillion, D.C. can’t pick up the tab for new projects like a few years ago. It is important to give states and localities control to develop financing mechanisms that work and can be brought to the local voters for approval.

“Along that line, Texas has stepped up with a plan. This November, Texans will be asked to vote on …a state constitutional amendment to shift a portion of general sales tax and motor vehicle sales tax revenues to our State Highway Fund…As more people and goods move into…Texas, we must ensure that the highways, bridges and roads can handle the increased capacity. And move goods and people efficiently through our state.” Our growth will slow down, he said, if newcomers grow tired of sitting in traffic and move on to other states.