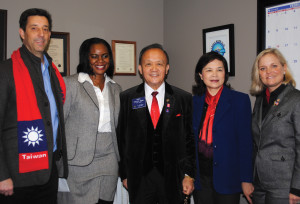 Space Center Rotary had some special guests in February – Rotary International President Gary Huang and his wife, Corenna. Here they were on hand when Space Center President Scott Rainey, from left, presented one of the club’s 50 Random Acts of Kindness to Shanna as the Huangs and Rotary District Governor Lisa Marie Massey look on. Shanna was a homeless Nigerian immigrant, a domestic violence survivor and the mother of two who was presented money to furnish a rental home for her family and to help her with her goal to become a registered nurse.

A graduate of Texas A&M University, she also has a master’s degree from the University of Houston. The Kemah City Council set her salary at $65,000 annually.

“We have another 12 propane buses set for delivery in March as we strive to provide the safest environment possible as we transport thousands of students each school day.”

The Texas PTA has partnered for several years with the Texas Commission on Environmental Quality to improve air quality for Texas youth.

Sen. Larry Taylor of Friendswood, who represents District 11, has been appointed as the new chairman of the Senate Public Education Committee by Lt. Gov. Dan Patrick.

Taylor, who also was reappointed to the Senate Business and Commerce Committee that has been working to reform the Texas Windstorm Insurance Association, said he was “honored by the appointment and I look forward to continuing to bring education into the 21st century.”

He was equally pleased, he added, to continue on the business panel.

The Goose Creek CISD has selected Randal O’Brien as its new superintendent. O’Brien has been heading the district as acting superintendent since the beginning of this school year. 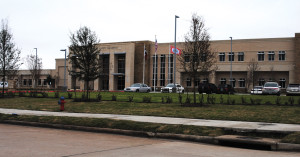 The Rev. Dr. Keith Alan Uffman is the new pastor at Webster Presbyterian Church — moving to the Bay Area from Greensboro, N.C., where he served as a pastor for almost 20 years and his wife, Mary Helen, taught and coached young athletes.

A graduate of Louisiana State University, he earned his Doctor of Ministry from Union Theological Seminary where he was awarded a Thompson Scholarship. He also attended Duke Divinity School and LSU Law School.

The Dean of Union Presbytery Seminary describes Pastor Keith as “…one of the most gifted, imaginative, and energetic pastors I have ever known.”

Sen. Ted Cruz (R-TX) has been named chairman of the Senate Commerce, Science and Transportation Committee’s subcommittee, which oversees NASA.

He was the top Republican on the subcommittee last year but did not play a prominent public role concerning space agency matters in the last Congress. He is known mostly for advocating reduced government spending and a campaign to kill Obamacare.

Pearland City Council has approved an agreement with the Texas Department of Transportation that will mean its Smith Road Project can go forward, agreeing to pay 20 percent or $996,899 of the $5.1 million cost for improvements from Hughes Ranch Road to FM 518.

The state will pay the remaining 80 percent.