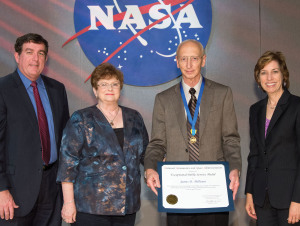 Milhoan, recognized as a national expert on reentry materials and systems, has supported thousands of tests performed in NASA’s experimental test facilities, including the Arc-jet and Radiant Heat Test Facility.

“We are extremely proud to have James as part of the Barrios team.  He represents the very core value of what Barrios provides to its customers.  I congratulate him for his excellent career solving NASA’s technical challenges associated with the re-entry of all human spaceflight vehicles and thank him for his dedication to NASA’s programs,” Barrios President and CEO Sandy Johnson said.

Greg Collins back on Kemah Council

Kemah City Council has appointed former Kemah Mayor Greg Collins to fill a vacancy on the City Council. He replaces Councilman Steve Mewborn, who resigned his Position 5 seat during the meeting. Mewborn resigned to become a deacon at his church.

Collins served two terms as Kemah’s mayor after being elected in May 2005. Prior to that he served on City Council.

Pot offenders to get a break

Non-violent first-time offenders caught with up to two ounces of marijuana will be offered a chance to avoid jail and being charged under a program announced Oct. 1 by the Harris County district attorney.

District Attorney Devon Anderson said her office, in cooperation with the Sheriff’s Office and the Houston Police Department, will give non-violent first-time offenders a chance to avoid a criminal conviction through the office’s new program called “First Chance Intervention Program.”

Instead, they will be offered a chance to successfully complete eight hours of community service or complete an eight-hour class. Otherwise, they could face the maximum penalty of 180 days in jail and up to a $2,000 fine. The program took effect Oct. 6.

In 2013, the office processed more than 43,000 Class B misdemeanor cases — the majority of which were for possession of marijuana.