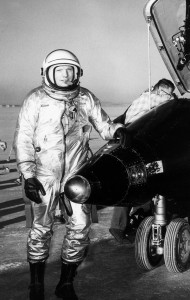 The cremated remains of America’s greatest hero were buried in the Atlantic Ocean during a service aboard the USS Philippine Sea on Sept. 14 after slipping “the surly bonds of Earth” Aug. 25.

The burial at sea came after funeral services in his native Ohio and a national memorial service Sept. 13 at the National Cathedral in Washington, D.C., where both present and past NASA administrators, astronauts, space scientists and congressmen were among the 1,500 who came to honor the 82-year-old former astronaut.

Armstrong died from complications that resulted from his Aug. 7 cardiovascular surgery.

It was his and astronaut Buzz Aldrin’s footsteps on the lunar surface July 20, 1969 that brought victory to their country over Russia in the Cold War space race. 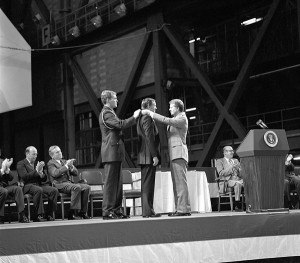 But, as Armstrong took one a final step into the hereafter, it was another astronaut who reminded the crowd – as War Secretary Edwin Stanton had done when President Lincoln died – that he belong to the ages.

“You have now shown once again the pathway to the stars,” Eugene Cernan, the last man to walk on the moon, said as he paid tribute to Armstrong, his fellow Purdue alumnus, during the Washington ceremony. “As you soar through the heavens beyond even where eagles dare to go, you can now finally put out your hand and touch the face of God.” 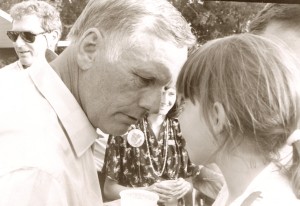 NASA Administrator Charles Bolden, also a former astronaut, said it was Armstrong’s courage and humility that “lifted him above the stars.”

Bolden also read a letter from President Barack Obama noting that “the imprint he left on the surface of the moon is matched only by the extraordinary mark he left on ordinary Americans.”

As Armstrong, who commanded the Apollo 11 mission that landed on the moon July 20, 1969, became the first man to step on the lunar surface, his first words were “That’s one small step for man, one giant leap for mankind.” 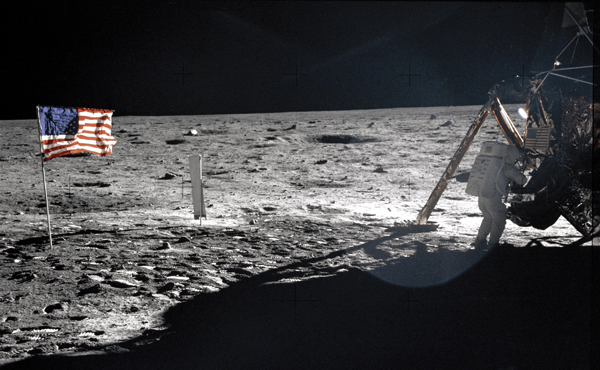 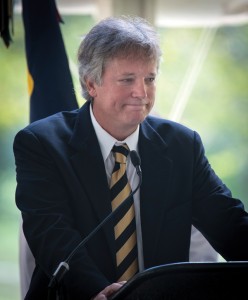 Eric ‘Rick’ Armstrong pauses as he speaks at his father’s funeral in Ohio.

Yet, he never wanted to be treated as a hero and shunned the limelight. As Cernan pointed out, the reluctant Armstrong said, “It’s not about me. It’s about the 500,000 who made it possible.” It was that courage and humility that  led Chris Kraft, then director of flight operations and later Johnson Space Center director, to suggest that Armstrong take that first step on the moon.

No doubt as he looked down on the proceedings, Armstrong was embarrassed that the world was making such as fuss over him.

After Apollo 11, Armstrong left the Clear Lake area, returning with his then-wife Jan to Ohio to teach and farm and raise their two sons, Mark and Eric. They returned in 1989, along the Lois and Buzz Aldrin and Mike and Kathleen Collins to join in the 20th anniversary celebration of the lunar landing that included a giant picnic at JSC and a big party and fireworks that evening at the Hilton, across from JSC. 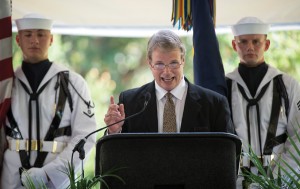 Both Aldrin and Armstrong also returned for the 40th anniversary ceremonies at Space Center Houston in 2009 – the last time many would see this humble hero who with Aldrin took a very special step into history.

Here are some of the comments:

President Barack Obama: “Future generations will draw inspiration from his spirit of discovery, humble composure and pioneering leadership in setting a bold, new course for space exploration. The imprint he left on the surface of the moon and the story of human history is matched only by the extraordinary mark he left on the hearts of all Americans.” 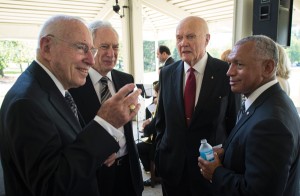 Sen. Kay Bailey Hutchison: “Neil Armstrong left his mark on the American people and on generations around the globe. This is his enduring legacy. Let ours be maintaining the great organization that made him a legend and helped make America the greatest nation on earth.”

NASA Administrator Charles Bolden:  “His remarkable achievements will be forever remembered, and his grace and humility will always be admired. As we take the next giant leap forward in human exploration of our vast universe, we stand on the shoulders of this brave, reluctant hero. Neil Armstrong’s first stop on the moon paved the way for others to be the ‘first’ to step foot on another planet. A grateful nation salutes a humble servant who answered the call and dared to dream.” 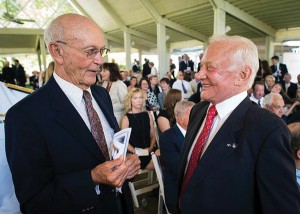 Apollo 11 astronauts Mike Collins, left, and Buzz Aldrin talk of old times as they await the start of services for Neil Armstrong in Ohio.

JSC Director Mike Coats: “The passing of Neil Armstrong has shocked all of us at the Johnson Space Center. The whole world knew Neil as the first man to step foot on the moon, but to us, he was a co-worker, a friend, and an outstanding spokesman for the human space program. His quiet confidence and ability to perform under pressure set an example for all subsequent astronauts. Our role model will be missed.”

Retired JSC Director Chris Kraft Jr.: “We lost a tremendous human being. We lost a man who knew what he wanted to do, who was good at accomplishing whatever he set out to do. I considered him to be our lead gladiator. He spoke with integrity and a total commitment to his beliefs.

“He was not only a great astronaut, he was a consummate engineer and scientist, a wonderful teacher, a true patriot and an outstanding representative of what all of us believe to be so imperative to the future of our country.”

Gene Cernan, the last man on the moon: “Fate looked down kindly on us when she chose Neil to be the first to venture to another world and to have the opportunity to look back from space at the beauty of our own. It could have been another but it wasn’t. It wasn’t for a reason. No one, no one, but no one could have accepted the responsibility of his remarkable accomplishment with more dignity and more grace than Neil Armstrong.”

Armstrong is one of three former astronauts who have died this summer.

Sally Ride, the first woman to fly in space, died July 23 at her California home after a 17-month battle with pancreatic cancer, and former Space Shuttle Commander Alan “Dex” Poindexter was killed in a Florida boating accident July 1.