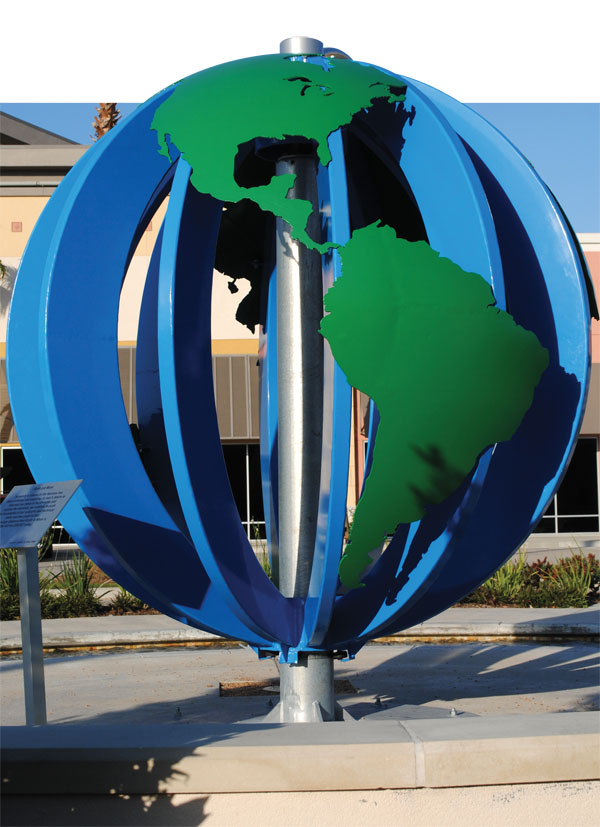 Statue of Planet Earth, rotating with the wind near the entrance of the space sculpture garden, is one of the most colorful on the Town Square plaza.

Nassau Bay and the Johnson Space Center have been long-time neighbors nodding at one another across NASA Parkway for many years.

Now, after a 50-year friendship, they have something new to smile about – a space sculpture garden created in the center of Nassau Bay Town Square by developer Griffin Partners as a tribute to the space agency and all it has meant to the Bay Area Houston community.

Focal point of the space garden, which includes flowers, fountains and space sculptures, is a 10-foot high statue of Earth that rotates with the wind.

She said she hoped the Town Square centerpiece and its space symbols will become a focal point in the area, along with Space Center Houston, going on to recognize the artist, Eric Ober.

Bay Area Houston Economic Partnership President Bob Mitchell also praised Griffin for “his vision and his passion that pushed the development project over the hump.

“Fred and Griffin Partners went out on a limb with this project – something that takes an incredible amount of courage. But he was committed to getting it done and now he’s got it done and we’re so proud of this complex.”

Nassau Bay Mayor Mark Denman welcomed the crowd to Space Walk Plaza and told how the new Town Square and all the new businesses are bringing in an extra $36,000 in sales tax to his city each year and how property values had increased from $2.6 million to $72 million.

“We started on this a little over six years ago, and it has been a labor of love. The original concept was changed numerous times.” But working with former Mayor Don Matter, Planning Director Dr. Roscoe Lee, former City Manager John Kennedy and current City Manager Chris Reed, “we settled upon the 17th or 18th (concept) you see here today.

“Once we got to a plan that looks pretty much like this, we realized we had a great opportunity to do something in that space in the middle – an opportunity to salute that neighbor across the street.”

The development sits on property that once housed Nassau Bay City Hall and about a dozen mostly vacant office buildings Griffin purchased and demolished in order to build the $150 million development.