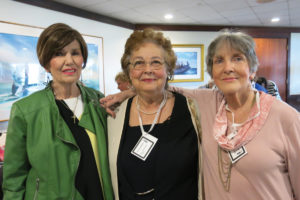 LOOKING FOR the most outstanding garden club in the Bay Area? You won’t have to look far. Most folks will tell you the hands-down winner is the Nassau Bay Garden Club, whose members are always on call when their city needs help.

Outside of Nassau Bay, few people know of all the hard work these ladies do to make their city sparkle. Led by President Betty Armstrong, they support things like Arbor Day and Beautification Day and find time to help clean up Peninsula Nature Park and the other city parks, repair and refurbish the city parks after Hurricane Harvey, even host a spring flower show for the city.

Then every two years they toss a big spring fashion show luncheon at Lakewood Yacht Club that is a must-attend event.

“Va-Va-Bloom” was the theme Chairman Cherry Nims and her committee picked for the 2018 luncheon that brought out a standing-room-only crowd of around 230 to watch as Style Show Co-Chairmen Jennifer Hudgins and Valerie Moses sent a number of pretty models down the runway, showing off spring and summer fashions from Casanova’s, Bay Back Boutique, The Clotheshorse Boutique and Designs by Kelly Halbach.

Long-time member Ann Gay wore a big smile as she welcomed both City Manager Jason Reynolds and former City Manager Chris Reed – each there to say thank you to the club that gives so much to their city.

At the entrance, highlighting the theme, stood a beautiful 1948 Packard limousine owned by the president of the Packard Club in League City, Tommy Baccaro, with his son, Anthony.

Or swooned over the gorgeous floral arrangements donated by HEB that created a floral garden in the Lakewood ballroom. 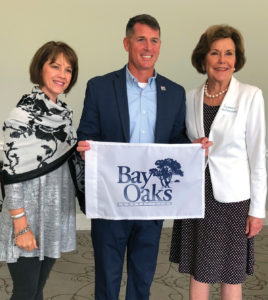 Astronaut Shane Kimbrough gets a warm welcome from Bay Oaks Women’s Association Vice Presidents Amy Schweers, left, and Suzanne Leatherman as he arrives to address their monthly luncheon at the country club..

And, just as you might expect, proceeds will go toward the beautification of Nassau Bay, horticulture scholarships and education programs.

Astronaut keynotes BOWA luncheon
CLEAR LAKE may be the home of the Johnson Space Center, but rarely do we get to spend time with the busy astronauts. So Bay Oaks Women’s Association members were more than delighted last month when astronaut Shane Kimbrough, a former International Space Station commander, was the keynote speaker for their April luncheon at the country club.

President Susan McCoy and Vice Presidents Suzanne Leatherman and Amy Schweers were there to greet him on arrival and welcome him to Bay Oaks. They, like everyone in the crowd, thoroughly enjoyed his talk and video of his experiences on the Space Station.

Some of the others spotted in the crowd were Annette Dwyer, Kimberly Weathers, Glenna Crist, Jodi Schnabel, Mitzi Romanko, Bobbie Moutz, Kay Lee Benoit, Gayle Wylie and Mary Colombo, to name a few. 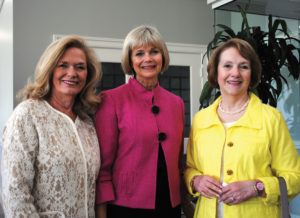 HOUSTON SYMPHONY League Bay Area kicked off their 2018 Home Tour by the Bay with a lively Pre-Tour Party at the home of Kyle and Misty Killebrew  in Clear Lake’s Bay Oaks.

Quite a party it was, and best of all, the proceeds help support music education in our local schools.