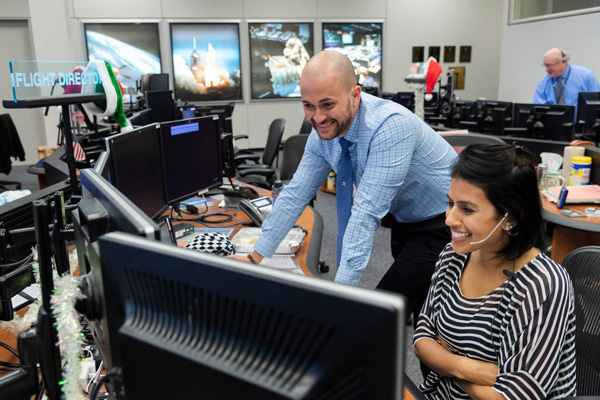 NASA is looking for leaders for one of the best jobs on Earth for human spaceflight – including missions to the Moon – the position of flight director in mission control at the agency’s Johnson Space Center in Houston.

Those chosen as NASA flight directors will lead human spaceflight missions to the International Space Station, as American astronauts once again are launching on American rockets and spacecraft from American soil to the orbiting laboratory.

For almost 20 years, humans have lived and worked continuously aboard the station, advancing scientific knowledge and demonstrating new technologies, making research breakthroughs not possible on Earth that will enable long-duration human and robotic exploration into deep space. Flight directors also will lead upcoming Artemis missions to the Moon, and eventually the first human missions to Mars.

Flight directors are responsible for leading teams of flight controllers, research and engineering experts, and support personnel around the world, and making the real-time decisions critical to keeping NASA astronauts safe in space.

“NASA flight directors need a unique mixture of confidence and humility, innovation and organization,” said Holly Ridings, chief flight director at Johnson. “The situations you have to deal with are occasionally very tough, and the stakes are always very high. But if you are able to handle that responsibility, there is nothing like knowing that you played a key role in the historic work that NASA does on a day-to-day basis.”

To be considered, flight director candidates must be U.S. citizens with a bachelor’s degree from an accredited institution in engineering, biological science, physical science, computer science, or mathematics. They also will need substantial related, progressively responsible professional experience, including time-critical decision-making experience in high-stress, high-risk environments. Many flight directors have previously been NASA flight controllers, though it is not a prerequisite to apply.

NASA will announce selections later this fall. The new flight directors then will receive extensive training on flight control and spacecraft systems, as well as operational leadership and risk management.

Learn more about NASA careers at:

Careers at NASA: Explore the Extraordinary, Every Day