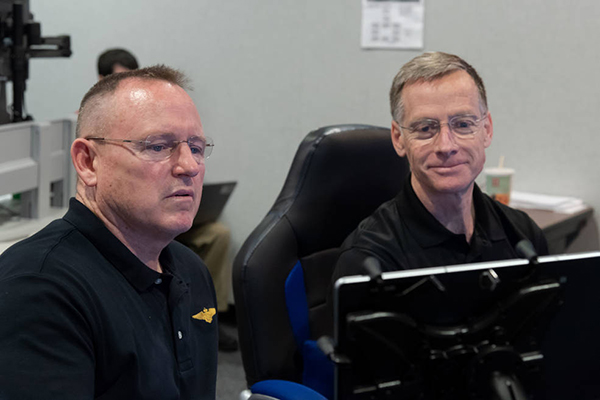 Wilmore will take the place of Boeing astronaut Chris Ferguson on the flight test as part of NASA’s Commercial Crew Program. Ferguson decided not to fly for personal reasons.

Wilmore has been training side-by-side with the crew since being named the sole backup for all flight positions in July 2018. He now will shift his focus specifically to the spacecraft commander’s duties in preparation for the flight to the space station. The flight is designed to test the end-to-end capabilities of the new Starliner system.

“Butch will be able to step in seamlessly, and his previous experience on both space shuttle and space station missions make him a valuable addition to this flight,” said Kathy Lueders, associate administrator of NASA’s Human Exploration and Operations Mission Directorate. “Chris has been a talented member of the crew for this mission. The NASA and Boeing Commercial Crew teams sincerely appreciate the invaluable work he has completed and he will continue to lead in the development of Starliner, which will help ensure that the Starliner Crew Flight Test will be a success.”

Wilmore has spent a total of 178 days in space over the course of two missions. In 2009, he served as the pilot of space shuttle Atlantis on STS-129, helping to deliver 14 tons of spare parts for the space station. In 2014, he returned to the space station via a Russian Soyuz spacecraft for a 167-day mission, during which he performed four spacewalks.

A native of Mt. Juliet, Tenn., Wilmore earned bachelor’s and master’s degrees in electrical engineering from Tennessee Technological University in Cookeville, and a master’s degree in aviation systems from the University of Tennessee in Knoxville. He is a retired captain in the U.S. Navy, with more than 7,800 flight hours and 663 carrier landings in tactical jet aircraft. He was selected as an astronaut in 2000.

“I’m grateful to Chris for his exceptional leadership and insight into this very complex and most capable vehicle,” Wilmore said. “Having had the chance to train alongside and view this outstanding crew as backup has been instrumental in my preparation to assume this position. Stepping down was a difficult decision for Chris, but with his leadership and assistance to this point, this crew is positioned for success. We will move forward in the same professional and dedicated manner that Chris has forged.”

Ferguson will assume the role of director of Mission Integration and Operations, as well as director of Crew Systems for Boeing’s Commercial Crew Program, where he will focus on ensuring the Starliner spacecraft meets the needs of NASA astronauts. In this role, he will be one of the last people the crew sees before leaving Earth and one of the first they see upon their return, as well as supporting them throughout their training and mission.

“I have full confidence in the Starliner vehicle, the men and women building and testing it, and the NASA astronauts who will ultimately fly it,” Ferguson said. “The Boeing team has taken all lessons from our first uncrewed Orbital Flight Test to heart, and is making Starliner one of the safest new crewed spacecraft ever fielded. I will be here on the ground supporting Butch, Nicole, and Mike while they prove it.”

Ferguson has been an integral part of the Starliner program since 2011, after retiring from NASA as a three-time space shuttle veteran, including as commander of STS-135, the final space shuttle flight to the space station.

“My personal thank you to Chris for his leadership. He is putting his family first, which Boeing fully supports,” said Leanne Caret, president and CEO, Boeing Defense, Space & Security. “We are fortunate he will continue to take an active role on the Starliner program and bring his depth and breadth of experience in human spaceflight to the program.”

The development of a safe, reliable and cost-effective solution for crew transportation services to and from the International Space Station remains a priority for NASA and Boeing, allowing the on-orbit research facility to continue to fulfill its promise as a world-class laboratory.

NASA’s Commercial Crew Program is working with the American aerospace industry as companies develop and operate a new generation of spacecraft and launch systems capable of carrying crews to low-Earth orbit and to the space station. Commercial transportation to and from the station will provide expanded utility, additional research time and broader opportunities for discovery on the orbital outpost.