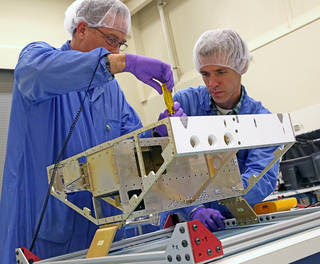 Engineers begin construction of the first of eight microsatellites for NASA’s Cyclone Global Navigation Satellite System at the Southwest Research Institute in San Antonio, Texas. Communication antennas, attitude control, GPS receiver, and other instrumentation will be installed on the satellite frame in the coming weeks.
Credits: SwRI

NASA’s Cyclone Global Navigation Satellite System mission, a constellation of eight microsatellites, will improve hurricane forecasting by making measurements of ocean surface winds in and near the eye wall of tropical cyclones, typhoons and hurricanes throughout their life cycle.

CYGNSS will allow scientists to probe the inner core of hurricanes from space frequently for the first time, using both direct and reflected signals from existing GPS satellites to obtain estimates of surface wind speeds over the ocean. These measurements will advance forecasting methods by providing data that can lead to better predictions of hurricane tracks, intensities and storm surges.

As the CYGNSS and GPS satellites circle Earth, their interaction will provide a new image of wind speeds over the entire tropics every few hours, whereas a single satellite supplies a new image every few days. The ability to better monitor and predict the rapid changes in hurricane intensity, such as those observed with Hurricane Katrina, is critical to hurricane forecasters and U.S. coastal communities.

Earlier this summer, the CYGNSS mission successfully passed two major NASA reviews, clearing the way for integration, testing and preparation of the microsatellites for flight.

“These reviews were a major milestone for CYGNSS, marking the end of the detailed design and planning stages of the mission and the beginning of flight hardware assembly,” said Chris Ruf, CYGNSS principal investigator at the University of Michigan, Ann Arbor.

“We are now in the last phase of the mission prior to launch and the beginning of a new era in hurricane observations.”

The University of Michigan is directing the CYGNSS mission for NASA, including satellite design and production and science data processing. The CYGNSS constellation will be deployed into low-Earth orbit with successive satellites passing over the same region approximately every 12 minutes. The Southwest Research Institute in San Antonio is building and testing the CYGNSS microsatellites and will host the mission operations center at its Boulder, Colorado location.

Assembly of the first microsatellite began Aug. 14, with the other seven to follow in the next few weeks. The body of each satellite measures roughly 20-by-25-by-11 inches, slightly larger than a standard carry-on suitcase. When fully assembled, the satellites will each weigh about 64 pounds. With the solar panels deployed, each microsatellite will have a wingspan of 5.5 feet. The satellites will be stacked for testing in early 2016.

The mission is scheduled to launch in late 2016 on an Orbital ATK Pegasus XL expendable rocket from Cape Canaveral in Florida, with science operations beginning in the 2017 Atlantic hurricane season.

CYGNSS is a NASA Earth Venture mission in the Earth System Science Pathfinder program, managed by the agency’s Langley Research Center in Hampton, Virginia. Other projects in the program include developing high-return Earth science missions with advanced remote-sensing instruments and frequently involve partnerships with other U.S. agencies or international science and space organizations.

NASA uses the vantage point of space to increase our understanding of our home planet, improve lives and safeguard our future. NASA develops new ways to observe and study Earth’s interconnected natural systems with long-term data records. The agency freely shares this unique knowledge and works with institutions around the world to gain new insights into how our planet is changing.