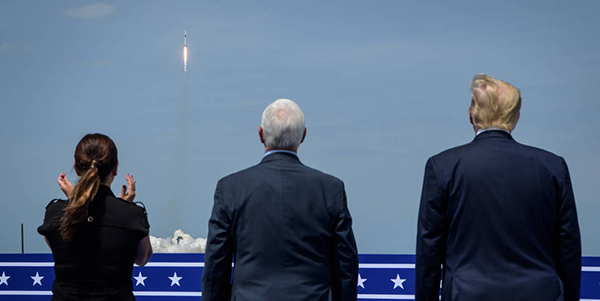 President Donald Trump, right, Vice President Mike Pence, and Second Lady Karen Pence watch the launch of a SpaceX Falcon 9 rocket carrying the company’s Crew Dragon spacecraft on NASA’s SpaceX Demo-2 mission with NASA astronauts Robert Behnken and Douglas Hurley onboard, Saturday, May 30, 2020, from the balcony of Operations Support Building II at NASA’s Kennedy Space Center in Florida. NASA’s SpaceX Demo-2 mission is the first launch with astronauts of the SpaceX Crew Dragon spacecraft and Falcon 9 rocket to the International Space Station as part of the agency’s Commercial Crew Program. The test flight serves as an end-to-end demonstration of SpaceX’s crew transportation system. Behnken and Hurley launched at 3:22 p.m. EDT on Saturday, May 30, from Launch Complex 39A at the Kennedy Space Center. A new era of human spaceflight is set to begin as American astronauts once again launch on an American rocket from American soil to low-Earth orbit for the first time since the conclusion of the Space Shuttle Program in 2011. Photo by NASA/Bill Ingalls

For the first time in history, NASA astronauts have launched from American soil in a commercially built and operated American crew spacecraft on its way to the International Space Station. The SpaceX Crew Dragon spacecraft carrying NASA astronauts Robert Behnken and Douglas Hurley lifted off at 3:22 p.m. EDT Saturday, May 30 on the company’s Falcon 9 rocket from Launch Complex 39A at NASA’s Kennedy Space Center in Florida.

“Today a new era in human spaceflight begins as we once again launched American astronauts on American rockets from American soil on their way to the International Space Station, our national lab orbiting Earth,” said NASA Administrator Jim Bridenstine. “I thank and congratulate Bob Behnken, Doug Hurley, and the SpaceX and NASA teams for this significant achievement for the United States. The launch of this commercial space system designed for humans is a phenomenal demonstration of American excellence and is an important step on our path to expand human exploration to the Moon and Mars.”

Known as NASA’s SpaceX Demo-2, the mission is an end-to-end test flight to validate the SpaceX crew transportation system, including launch, in-orbit, docking and landing operations. This is SpaceX’s second spaceflight test of its Crew Dragon and its first test with astronauts aboard, which will pave the way for its certification for regular crew flights to the station as part of NASA’s Commercial Crew Program.

“This is a dream come true for me and everyone at SpaceX,” said Elon Musk, chief engineer at SpaceX. “It is the culmination of an incredible amount of work by the SpaceX team, by NASA and by a number of other partners in the process of making this happen. You can look at this as the results of a hundred thousand people roughly when you add up all the suppliers and everyone working incredibly hard to make this day happen.”

The program demonstrates NASA’s commitment to investing in commercial companies through public-private partnerships and builds on the success of American companies, including SpaceX, already delivering cargo to the space station.

“It’s difficult to put into words how proud I am of the people who got us here today,” said Kathy Lueders, NASA’s Commercial Crew Program manager. “When I think about all of the challenges overcome – from design and testing, to paper reviews, to working from home during a pandemic and balancing family demands with this critical mission – I am simply amazed at what the NASA and SpaceX teams have accomplished together. This is just the beginning; I will be watching with great anticipation as Bob and Doug get ready to dock to the space station tomorrow, and through every phase of this historic mission.”

SpaceX controlled the launch of the Falcon 9 rocket from Kennedy’s Launch Control Center Firing Room 4, the former space shuttle control room, which SpaceX has leased as its primary launch control center. As Crew Dragon ascended into space, SpaceX commanded the spacecraft from its mission control center in Hawthorne, California. NASA teams are monitoring space station operations throughout the flight from Mission Control Center at the agency’s Johnson Space Center in Houston.

The SpaceX Crew Dragon spacecraft is scheduled to dock to the space station at 10:29 a.m. Sunday, May 31. NASA Television and the agency’s website are providing ongoing live coverage of the Crew Dragon’s trip to the orbiting laboratory. Behnken and Hurley will work with SpaceX mission control to verify the spacecraft is performing as intended by testing the environmental control system, the displays and control system, and by maneuvering the thrusters, among other things. The first docking maneuver began Saturday, May 30, at 4:09 p.m., and the spacecraft will begin its close approach to the station at about 8:27 a.m. Sunday, May 31. Crew Dragon is designed to dock autonomously, but the crews onboard the spacecraft and the space station will diligently monitor the performance of the spacecraft as it approaches and docks to the forward port of the station’s Harmony module.

After successfully docking, the crew will be welcomed aboard the International Space Station, where they will become members of the Expedition 63 crew, which currently includes NASA astronaut Chris Cassidy. NASA will continue live coverage through hatch opening and the crew welcoming ceremony. The crew will perform tests on Crew Dragon in addition to conducting research and other tasks with the space station crew.

Three astronauts aboard the International Space Station will participate in a live NASA Television crew news conference from orbit on Monday, June 1, beginning at 11:15 a.m. on NASA TV and the agency’s website.

Behnken is the joint operations commander for the mission, responsible for activities such as rendezvous, docking and undocking, as well as Demo-2 activities while the spacecraft is docked to the space station. He was selected as a NASA astronaut in 2000 and has completed two space shuttle flights. Behnken flew STS-123 in March 2008 and STS-130 in February 2010, performing three spacewalks during each mission. Born in St. Anne, Missouri, he has bachelor’s degrees in physics and mechanical engineering from Washington University in St. Louis and earned a master’s and doctorate in mechanical engineering from the California Institute of Technology in Pasadena. Before joining NASA, he was a flight test engineer with the U.S. Air Force.

Hurley is the spacecraft commander for Demo-2, responsible for activities such as launch, landing and recovery. He was selected as an astronaut in 2000 and has completed two spaceflights. Hurley served as pilot and lead robotics operator for both STS‐127 in July 2009 and STS‐135, the final space shuttle mission, in July 2011. The New York native was born in Endicott but considers Apalachin his hometown. He holds a Bachelor of Science degree in civil engineering from Tulane University in New Orleans and graduated from the U.S. Naval Test Pilot School in Patuxent River, Maryland. Before joining NASA, he was a fighter pilot and test pilot in the U.S. Marine Corps.

The Demo-2 mission is the final major test before NASA’s Commercial Crew Program certifies Crew Dragon for operational, long-duration missions to the space station. As SpaceX’s final flight test, it will validate all aspects of its crew transportation system, including the Crew Dragon spacecraft, spacesuits, Falcon 9 launch vehicle, launch pad 39A and operations capabilities.

While en route to the station, Behnken and Hurley will take control of Crew Dragon for two manual flight tests, demonstrating their ability to control the spacecraft should an issue with the spacecraft’s automated flight arise. On Saturday, May 30, while the spacecraft is coasting, the crew will test its roll, pitch and yaw. When Crew Dragon is about 1 kilometer (0.6 miles) below the station and moving around to the docking axis, the crew will conduct manual in-orbit demonstrations of the control system in the event it were needed. After pausing, rendezvous will resume and mission managers will make a final decision about whether to proceed to docking as Crew Dragon approaches 20 meters (66 feet).

For operational missions, Crew Dragon will be able to launch as many as four crew members at a time and carry more than 220 pounds of cargo, allowing for an increased number crew members aboard the space station and increasing the time dedicated to research in the unique microgravity environment, as well as returning more science back to Earth.

The Crew Dragon being used for this flight test can stay in orbit about 110 days, and the specific mission duration will be determined once on station based on the readiness of the next commercial crew launch. The operational Crew Dragon spacecraft will be capable of staying in orbit for at least 210 days as a NASA requirement.

At the conclusion of the mission, Behnken and Hurley will board Crew Dragon, which will then autonomously undock, depart the space station, and re-enter Earth’s atmosphere. Upon splashdown off Florida’s Atlantic coast, the crew will be picked up by the SpaceX recovery ship and returned to the dock at Cape Canaveral.

NASA’s Commercial Crew Program is working with SpaceX and Boeing to design, build, test and operate safe, reliable and cost-effective human transportation systems to low-Earth orbit. Both companies are focused on test missions, including abort system demonstrations and crew flight tests, ahead of regularly flying crew missions to the space station. Both companies’ crewed flights will be the first times in history NASA has sent astronauts to space on systems owned, built, tested and operated by private companies.