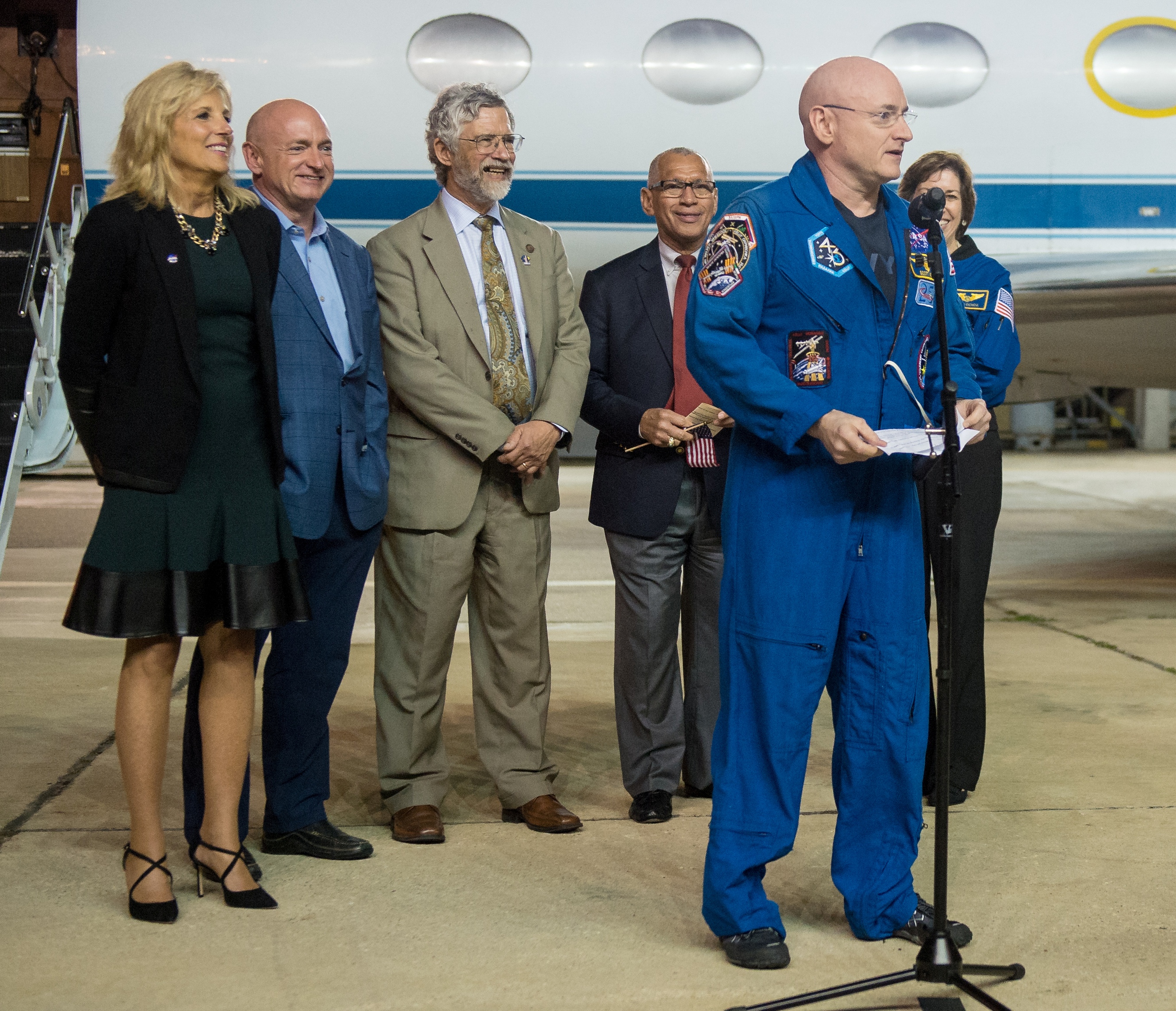 Kelly arrived Wednesday night at Ellington, where he will be met by his daughters and girlfriend and a number of dignitaries.

Joining their return trip aboard a Soyuz TMA-18M spacecraft was Sergey Volkov, also of the Russian space agency Roscosmos, who arrived on the station Sept. 4, 2015. The crew touched down southeast of the remote town of Dzhezkazgan.

“Scott Kelly’s one-year mission aboard the International Space Station has helped to advance deep space exploration and America’s Journey to Mars,” said NASA Administrator Charles Bolden. “Scott has become the first American astronaut to spend a year in space, and in so doing, helped us take one giant leap toward putting boots on Mars.”

During the record-setting One-Year mission, the station crew conducted almost 400 investigations to advance NASA’s mission and benefit all of humanity. Kelly and Kornienko specifically participated in a number of studies to inform NASA’s Journey to Mars, including research into how the human body adjusts to weightlessness, isolation, radiation and the stress of long-duration spaceflight. Kelly’s identical twin brother, former NASA astronaut Mark Kelly, participated in parallel twin studies on Earth to help scientists compare the effects of space on the body and mind down to the cellular level.

One particular research project examined fluid shifts that occur when bodily fluids move into the upper body during weightlessness. These shifts may be associated with visual changes and a possible increase in intracranial pressure, which are significant challenges that must be understood before humans expand exploration beyond Earth’s orbit. The study uses the Russian Chibis device to draw fluids back into the legs while the subject’s eyes are measured to track any changes. NASA and Roscosmos already are looking at continuing the Fluid Shifts investigation with future space station crews.

The crew took advantage of the unique vantage point of the space station, with an orbital path that covers more than 90 percent of Earth’s population, to monitor and capture images of our planet. They also welcomed the arrival of a new instrument to study the signature of dark matter and conducted technology demonstrations that continue to drive innovation, including a test of network capabilities for operating swarms of spacecraft.

Kelly and Kornienko saw the arrival of six resupply spacecraft during their mission. Kelly was involved in the robotic capture of two NASA-contracted cargo flights — SpaceX’s Dragon during the company’s sixth commercial resupply mission and Orbital ATK’s Cygnus during the company’s fourth commercial resupply mission. A Japanese cargo craft and three Russian resupply ships also delivered several tons of supplies to the station.

Kelly ventured outside the confines of the space station for three spacewalks during his mission. The first included a variety of station upgrade and maintenance tasks, including routing cables to prepare for new docking ports for U.S. commercial crew spacecraft. On a second spacewalk, he assisted in the successful reconfiguration of an ammonia cooling system and restoration of the station to full solar power-generating capability. The third spacewalk was to restore functionality to the station’s Mobile Transporter system.

Including crewmate Gennady Padalka, with whom Kelly and Kornienko launched on March 27, 2015, 10 astronauts and cosmonauts representing six different nations (the United States, Russia, Japan, Denmark, Kazakhstan and England) lived aboard the space station during the yearlong mission.

With the end of this mission, Kelly now has spent 520 days in space, the most among U.S. astronauts. Kornienko has accumulated 516 days across two flights, and Volkov has 548 days on three flights.

Expedition 47 continues operating the station, with NASA astronaut Tim Kopra in command. Kopra, Tim Peake of ESA (European Space Agency) and Yuri Malenchenko of Roscosmos will operate the station until the arrival of three new crew members in about two weeks. NASA astronaut Jeff Williams and Russian cosmonauts Alexey Ovchinin and Oleg Skripochka are scheduled to launch from Baikonur, Kazakhstan, on March 18.

The International Space Station is a convergence of science, technology and human innovation that enables us to demonstrate new technologies and make research breakthroughs not possible on Earth. It has been continuously occupied since November 2000 and, since then, has been visited by more than 200 people and a variety of international and commercial spacecraft. The space station remains the springboard to NASA’s next giant leap in exploration, including future missions to an asteroid and Mars.