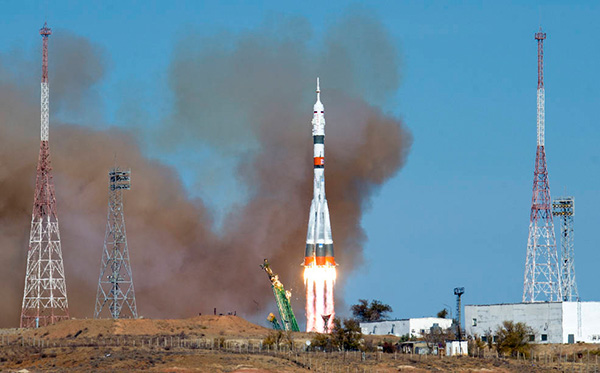 NASA astronaut Kate Rubins and two Russian cosmonauts arrived aboard the International Space Station on Oct. 14, returning a medical researcher to the orbiting laboratory ahead of the 20th anniversary of uninterrupted human presence in space.

Docking of the Soyuz MS-17 spacecraft to the station’s Rassvet module occurred at 4:48 a.m. EDT, after a two-orbit, three-hour flight, bringing Rubins, Sergey Ryzhikov and Sergey Kud-Sverchkov to the orbiting laboratory. The Soyuz spacecraft launched Wednesday at 1:45 a.m. (10:45 a.m. Kazakhstan time) from the Baikonur Cosmodrome in Kazakhstan.

Rubins, Ryzhikov, and Kud-Sverchkov join Expedition 63 Commander Chris Cassidy of NASA and Roscosmos cosmonauts Anatoly Ivanishin and Ivan Vagner, who have been aboard the complex since April. NASA Television and the agency’s website will provide live coverage of the hatch opening beginning at 6 a.m.

Ryzhikov will become the commander when Expedition 64 begins Wednesday, Oct. 21, with the departure of Cassidy, Vagner, and Ivanishin following their six-month stay. The change of command ceremony with all crew members is scheduled for Tuesday, Oct. 20 at 4:15 p.m. and will air live on NASA Television and the agency’s website.

This is the second spaceflight for Rubins and Ryzhikov and the first for Kud-Sverchkov, who will live and work aboard the outpost for six months. The trio will conduct research in technology development, Earth science, biology, human research and more.

During Rubins’ first spaceflight in 2016, she became the first person to sequence DNA in space. Rubins earned a bachelor’s degree in molecular biology from the University of California, San Diego, and a doctorate in cancer biology from Stanford University’s Medical School Biochemistry Department and Microbiology and Immunology Department, Palo Alto, California.

Research conducted in microgravity helps NASA prepare for long-duration missions to the Moon and Mars and contributes to improvements for life on Earth.

During Expedition 64, the crew will grow by four more members with the arrival of Crew-1 aboard the SpaceX Crew Dragon on the first operational commercial mission to the space station, returning the capability to regularly launch humans from America for the first time since retirement of the space shuttle program in 2011. Crew-1 is currently targeted for launch in November.

As the International Space Station approaches the 20th anniversary of continuous human presence, astronauts continue to test technologies, perform science and develop the skills needed to explore farther from Earth aboard the orbiting laboratory. As a global endeavor, 241 people from 19 countries have visited the unique microgravity destination that has hosted more than 3,000 research and educational investigations from researchers in 108 countries and areas.

Learn more about space station activities by following @space_station, and @ISS_Research on Twitter, as well as the ISS Facebook and ISS Instagram accounts and the space station blog.