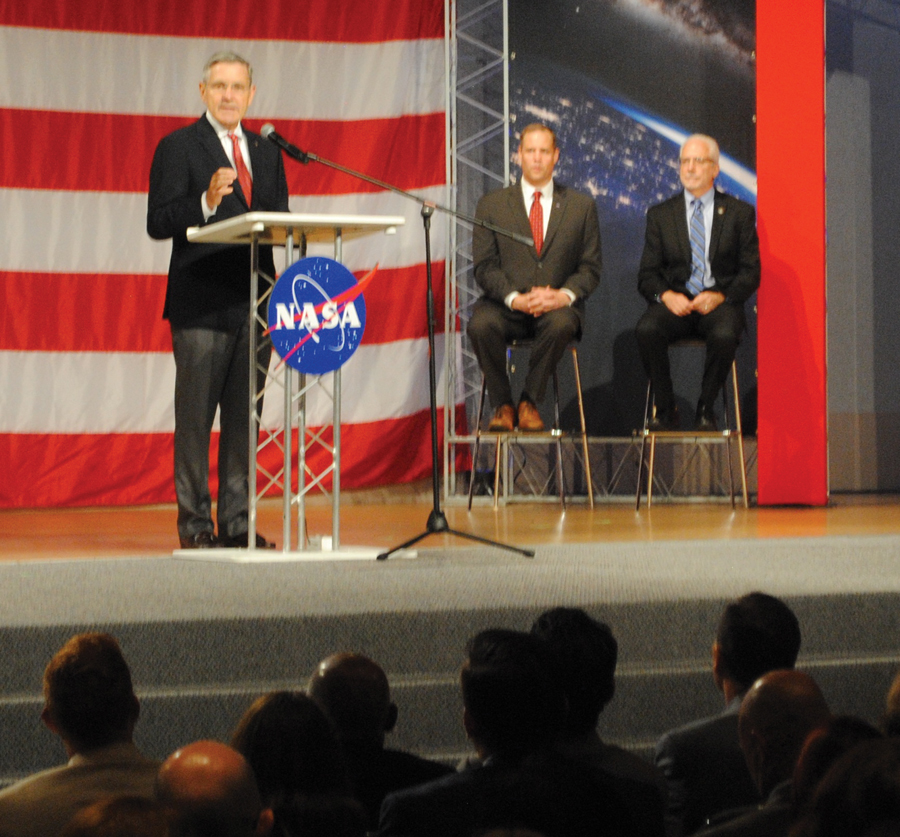 “This is a big deal for our country, and we want America to know that we’re back – that we’re flying American astronauts on American rockets from American soil,” he said as the crowd’s roar reached heights probably not heard around JSC in years.

Sweet words to everyone’s ears, especially the nine astronauts who were introduced as America’s first commercial crew astronauts – those who will help increase commercial companies’ involvement in low Earth orbit and possibly take over operation of the space station some day in the future and allow NASA to focus on deep space exploration.

A NEW ERA
“Today,” Bridenstine continued, “our country’s dreams of greater achievements in space are within our grasp. This accomplished group of American astronauts, flying on new spacecraft developed by our commercial partners, Boeing and SpaceX, will launch a new era of human spaceflight. Today’s announcement advances our great American vision and strengthens the nation’s leadership in space.”

Joining him on stage for the presentation were Johnson Space Center Director Mark Geyer, Kennedy Space Center Director Bob Cabana, Boeing Defense, Space and Security CEO Leanne Caret and SpaceX CEO Gwynne Shotwell, who each spoke briefly of their hopes for the future before the new NASA chief introduced the astronauts – five who will fly on Boeing’s Starliner and four who will man SpaceX’s Dragon. 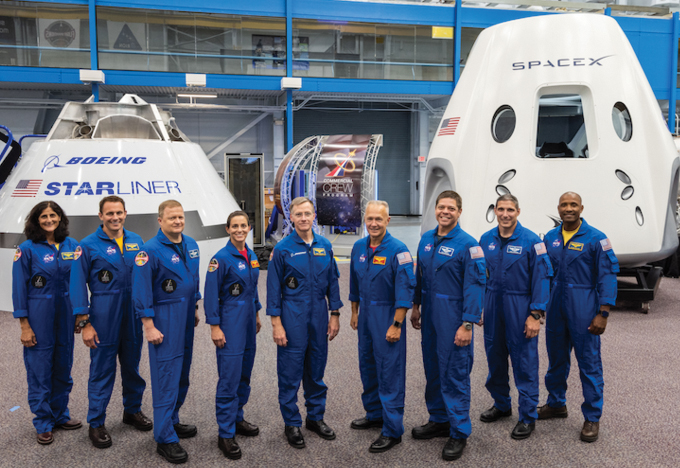 NASA introduced the first U.S. astronauts who will fly on American-made, commercial spacecraft to and from the International Space Station – an endeavor that will return astronaut launches to U.S. soil for the first time since the space shuttle’s retirement in 2011. The nine astronauts introduced to crew Boeing’s CST-100 Starliner and SpaceX’s Crew Dragon are, from left, Sunita Williams, Josh Cassada, Eric Boe, Nicole Mann, Christopher Ferguson, Douglas Hurley, Robert Behnken, Michael Hopkins and Victor Glover. 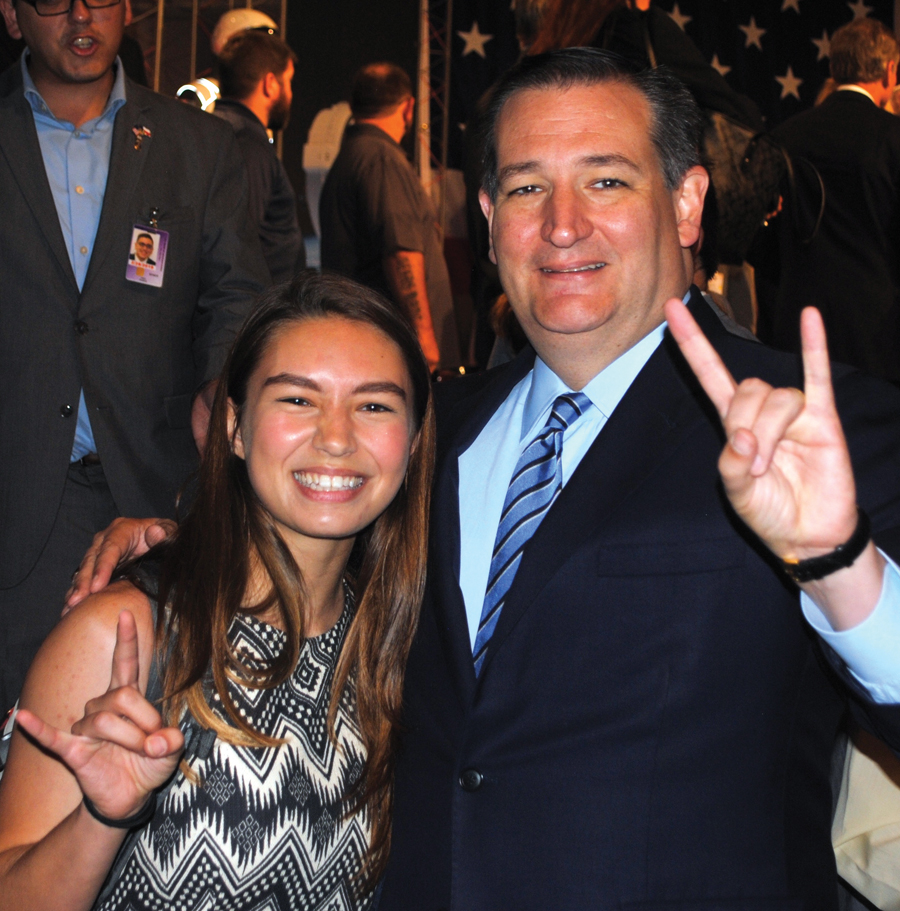 NASA intern and University of Texas student Stephanie Zeller shares a light moment with Sen.Ted Cruz, one of a number of elected officials at the ceremony at JSC’s Teague Auditorium.

“All of us are here today because we stand for something new and profound, built upon an amazing legacy, and it is personal for all of us,” Boeing executive Leanne Caret said. “Today we start a new chapter, and we’re so thrilled to be on this journey.” Both companies bring unique approaches and ideas to the development and testing of their systems, which is why NASA selected both companies in September 2014.

“The 7,000 women and men of SpaceX understand what a sacred honor this was for us to be part of this program, and for us to fly [NASA astronauts],” said SpaceX executive Gwynne Shotwell. “So thank you very much, we take it seriously, we won’t let you down.”

SEVERAL APPEARANCES
The stage presentation was one of several appearances by Bridenstine during a three-day visit to JSC. On his first morning, the 43-year-old Michigan native got a up-close look at the Orion mockup that is being readied for its major safety test in April to verify that its launch abort system can steer the capsule and astronauts inside it to safety in the event of an issue with the Space Launch System rocket when the spacecraft is under the highest aerodynamic loads it will experience during ascent for deep-space missions.

Next, he met with a select group of local reporters, answering a variety of questions about the future of the space station, the Gateway moon orbiting project that involves returning to the moon and is seen as a stepping stone to Mars, and the delays on the James Webb Telescope.

“NASA is doing things it has not done before, using government resources never done before,” he told reporters in a sit-down roundtable session, “and we want to be sure we do not have another gap.” 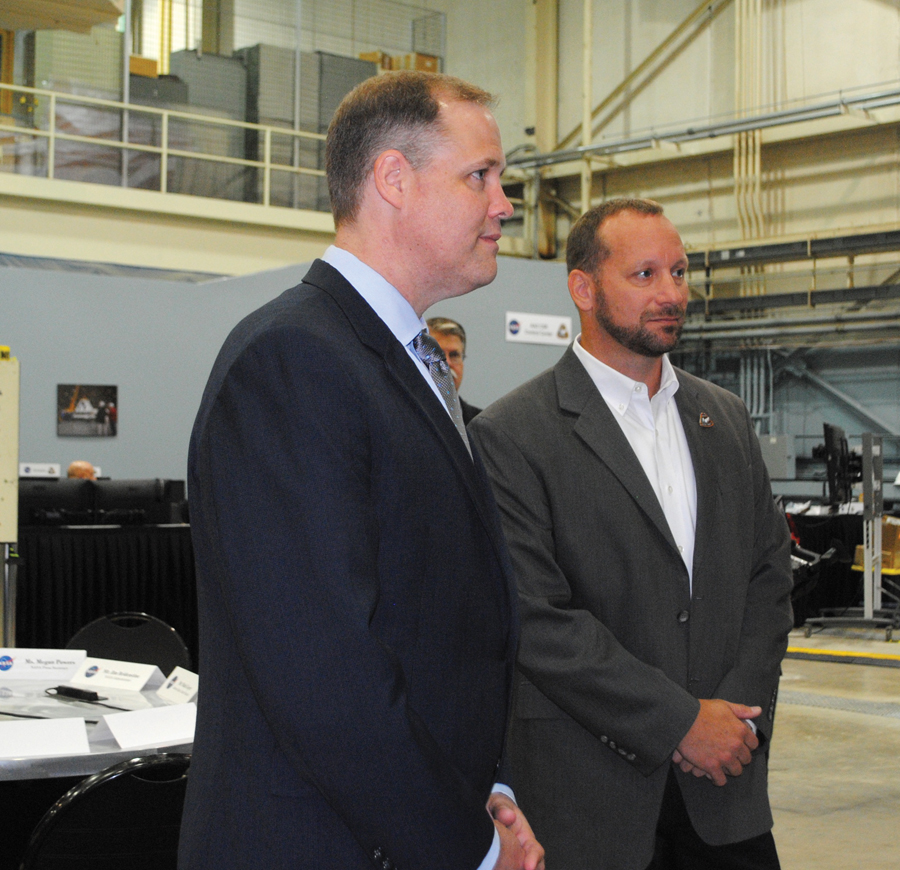 NASA Administrator Jim Bridenstine, left, looks over the work being done in Building 9S at Johnson Space Center for the launch of the Orion mockup.

Bridenstine started his visit here at a reception at Space Center Houston where he addressed aerospace executives, local business people and elected officials, discussing a change in national space policy providing for an American-led integrated program with private sector partners for a return to the moon, followed by missions to Mars and beyond.

The new policy, he said, calls for the NASA administrator to “lead an innovative and sustainable program of exploration with commercial and international partners to enable human expansion across the solar system and to bring back to Earth new knowledge and opportunities.”

Bridenstine emphasized the importance of the word “sustainable” in the policy. He said, “When we talk about going to the moon, this time to stay, we want the entire architecture between Earth and the moon to be sustainable — in other words ‘reusable.’ We want tugs that are going back and forth from low Earth orbit to lunar orbit to be reusable. We want the lunar landers to be reusable so that they can go back to the surface of the moon over and over again.

“That entire architecture is going to be built on an American backbone. We will have critical infrastructure developed by NASA, by those in this room and at Johnson Space Center, that will give us a sustainable infrastructure on the moon… When we go to the moon this time, we’re going to stay.”