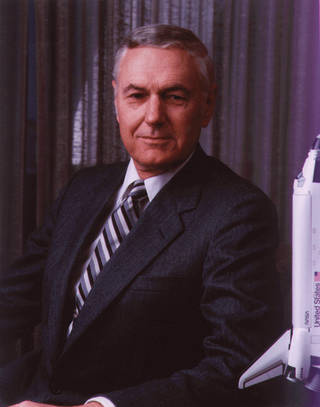 The following is a statement from NASA Administrator Jim Bridenstine on the passing of the agency’s sixth administrator, James Beggs, on April 23. Mr. Beggs served as NASA administrator from July 1981 to December 1985.

“NASA sends its condolences to the family of James Beggs. Mr. Beggs led the agency during the earliest days of the Space Shuttle Program and helped us open a whole new era of exploration. We continue to build on his legacy today as we take advantage of our long-term presence in low-Earth orbit to make the advances to travel farther, and seed an entirely new segment of the economy through the innovations of commercial partners.

“Mr. Beggs also served his country in the U.S. Navy and supported NASA’s achievements during the Apollo era during an agency tenure in the late 1960s. His legacy guided the shuttle program toward its three decades of achievements and set the stage for a diverse and flexible astronaut corps from which we continue to benefit. We salute his service and will continue to honor his contributions to our great agency.”