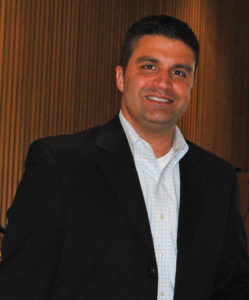 Hometown: I was born in San Diego, Calif., and moved 11 times. If I had to claim a hometown, it would be Dayton, Ohio, where I went to high school.

Family: Married 12 years – Wife, Katie; daughters Marisa 11, Natalie 7, and son, Samuel 2…..and my kids would make me count their other brother, Cooper, a hound/boxer mix we adopted from a local shelter

My favorite writer is: Bill Watterson (Calvin and Hobbes).

Someone I’d like to meet: As a history buff, it was hard for me to narrow this down to one person. But J.D Rockefeller would be one at the top. Rockefeller epitomized what it meant to dream big and what it takes to make those dreams a reality. Picking his brain for an afternoon regarding his ambition and unwavering fortitude, and at the same time at what costs, would be fascinating to me.

If I could switch places with someone for just one day, I’d choose: NASA Astronaut Scott Tingle, who is currently on the International Space Station. I would stare out the window the whole time. When I returned home, hopefully I could translate the images in my head into such descriptive words of insight that my children fully grasp and live by what it means to not sweat the small stuff.

My favorite performers are: Actor/Actress: Chevy Chase, Leslie Mann. Comedy is the best time out from real life. Musicians: Everyone from Louis Armstrong, to Willie Nelson, to Aaron Lewis, to Stevie Nicks.

I like to spend my leisure time: With my family. I enjoy sharing new experiences with my kids from showing them how to fish to taking out the old tarp from the garage and adding dawn soap and water for a “slip and slide.” Anything to get them smiling, laughing and engaged, without a tablet in their hands.

If I could travel any place, I’d go to: Every historical marker, commemoration plaque, monument, small town, ghost town, big city, lake, river, creek, state park, and unmapped back road in these United States of America.

My favorite meal is: This is a toss-up between corned beef with cabbage and my wife’s meatloaf with mashed potatoes.

As a youngster, I wanted to grow up to be: Everything. I had such an active imagination, I thought I could be whatever I wanted.

The thing that bugs me the most is: A negative attitude.

My favorite movie is: Tombstone

Few people know: I have a history degree.