From its inception, the Houston Ship Channel, one of the true engineering marvels of the 20th century, has been more a living and breathing entity than a “build it and forget it” structure. The modernization of vessels, including their increasing size, that deliver goods via the channel to the Port of Houston, along with changes in the area’s topography through natural forces, all work to require constant maintenance, expansion and revision along the 52-mile complex of private and public facilities.

Since its earliest days, when U.S. Rep. Tom Ball, after whom the town located north of Houston is named, devised an ingenious concept that called for the city of Houston to share the cost with the federal government to dredge a deep water channel from the Gulf of Mexico to Houston, the ccomplex has been the site of some of the most revolutionary and forward thinking projects in maritime engineering and construction.

Over the years, the channel has helped to fuel the economy of not only Houston, but also the numerous communities that make up the area. According to a 2012 study by Martin & Associates, channel-related businesses contribute over one million jobs across Texas, while the area accounts for over $178 billion in statewide economic impact.

In order to maintain its number one rankings in U.S. foreign waterborne tonnage, as well as in U.S. imports and exports, large scale projects must be regularly undertaken to help the channel meet the demands of the modern shipping industry. As the channel prepares to celebrate its 100th anniversary in 2014, massive deepening and widening projects under the direction of the Army Corps of Engineers are set to kick into high gear at a pair of critical shipping lanes—the Barbours Cut and Bayport Channels—that will improve navigation safety and permit access to larger ships. 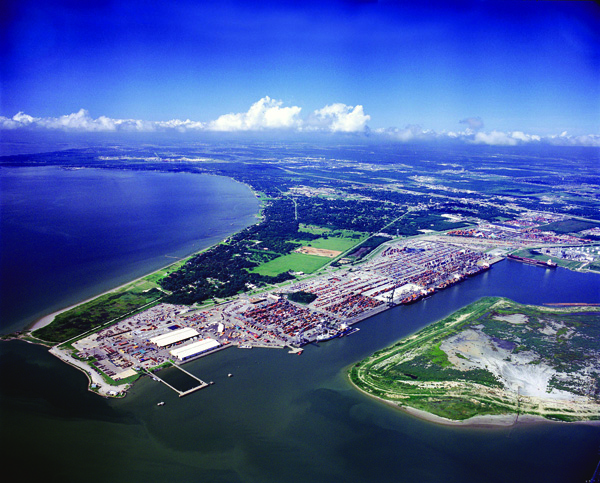 Located on the northern tip of Galveston Bay, adjacent to the Atkinson Island Wildlife Management Area, Barbours Cut is a 1.3-mile, 300-foot wide, 40-foot deep channel. The current 150-foot berthing area is far less than the 225 feet recommended by the Houston Pilots Association, so the plan in development calls for the berthing area depth to be increased by dredging to shift the channel 75 feet to the north and deepening the channel to 45 feet.

Saathoff said by increasing the berthing area size and channel depth, larger, more efficient ships will be able to gain access to the area, meaning that fewer ships would be needed to deliver cargo through the Houston Ship Channel. These ships would also be newer vessels for the most part, using more fuel efficient engines, which would lessen the environmental impact of these ships as they traverse the channel.

“The present 40-foot depth can accommodate most of the vessels that have been calling into the Houston Ship Channel, but we know there is a desire to bring larger vessels into the facility. We also talk about this in relation to the Panama Canal. Presently, we accommodate everything that comes through the existing canal, but once they open the third set of locks (projected to occur in 2015) that can accommodate vessels close to 12,000 TEUs (Twenty-foot Equivalent Units), we want to be able to match that,” Saathoff said.

Saathoff says work at the Barbours Cut and Bayport Channels are treated as one project with a price tag of about $130 to $150 million. A hydraulic pipeline dredge will be used to perform the work at both sites. This type of dredge floats along the water and excavates and pumps material through a temporary pipeline to a designated placement area. The plan calls for the dredged material at Barbours Cut, primarily clay, to be placed in the adjacent area at Spillman Island for eventual use in the development of higher levees.

According to Saathoff, Barbours Cut, constructed in the 1970s, was the first container terminal completed in the Houston Ship Channel and it is in need of modernization in order to extend its useful life. The widening of the channel will also allow for the installation of larger cranes used in loading and off loading vessels.

“By widening the berth, we can use larger cranes at Barbours Cut to match the cranes being used at the Bayport facility. Those cranes extend farther out over the water, so we need to adjust the channel so boats can work under the cranes,” Saathoff said.

Positioned near the southern end of Galveston Bay and right at the mouth of the Houston Ship Channel, the 3.5-mile long, 300-foot wide, 40-foot deep Bayport Channel was constructed between the mid-‘70s and mid-‘90s, and like the Barbours Cut Channel, advances in the size of ships utilizing the area have made widening and deepening the channel imperative to its future efficiency. It serves as the entrance to the Bayport Terminal, a high volume container terminal for the Port of Houston and one of the largest container terminals in the country.

While some widening of the “Flare” portion of the channel will be included in the project, the primary scope of work at the Bayport Channel, which requires annual dredging, calls for deepening it to the 40-foot depth.

Saathoff says the dredging work is scheduled to begin in February 2014, with the Port Authority seeking to award a construction contract for the work in January 2014. The plans call for dredging to begin at Barbours Cut first. Because the Bayport Channel is a longer waterway, it will require more preparation work than Barbours Cut, and the total project is expected to take several months to complete.

Port Commission Chairperson Janiece Longoria recently established the Chairman’s Citizen’s Advisory Council (CCAC) to serve in an advisory role to the Port Commission and Port of Houston Authority on a variety of issues of mutual concern. The council will meet quarterly and its members will be geographically diverse in order to provide an effective line of communication between the surrounding communities and port officials.

“The CCAC will facilitate a regular and open channel for community input regarding the Port of Houston Authority’s mission and priorities, including job creation, economic development and environmental stewardship,” Longoria said. “The CCAC is an important initiative to engage our stakeholder communities with the work of the Port Commission.” 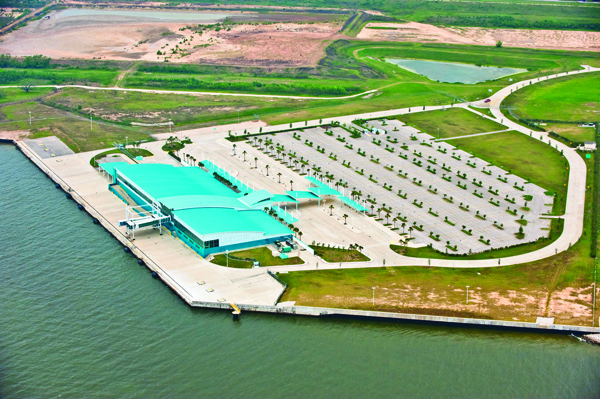 The Port of Houston Commission recently awarded an eight-month, $325,000 contract, with an option to renew for an additional cruise season for parking services at the Bayport Cruise Terminal. Starting in November, Princess Cruises will begin a total of 77 sailings through 2016. Norwegian Cruise Line will begin sailing out of Houston next year for a total of 75 cruises through 2017.