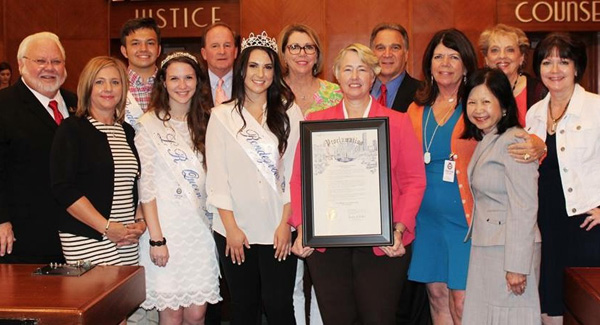 Proclamation recognizes 50 years of contributions to the Bay Area

The proclamation, presented by Houston City Council members Michael Kubosh and Dave Martin, recognized the long-running festival for its continued contributions to the Clear Lake area.

The Lunar Rendezvous Festival originated following the opening of the Johnson Space Center, offering cultural amenities to aerospace families moving to the area and saluting man’s achievements in space, including the history-making 1965 rendezvous of Gemini VI and Gemini VII in space.

In the past 10 years alone, the Lunar Rendezvous Festival, a non-profit organization, has given back more than $1.5 million to the Bay Area Houston community. This year, $100,000 in college scholarships has already been awarded to deserving students, and another $80,000 will be awarded to local non-profits, with a focus on education, children’s causes, and cultural arts. Lunar Rendezvous Festival also founded the Bay Area Museum, which it continues to maintain.

Over the years, the festival has grown from a number of events taking place over a 10-day period to a series of events that now stretch over five or six months.

The festival typically includes a golf tournament, a tennis tournament, a 5-K run, a non-denominational Sunset Service, a dining night, a boat parade, a family fun night, a fashion show and a ball, along with a few other events, which are all open to the public. Thousands of volunteers have contributed to the success of the organization since 1965.

From the beginning, an important part of the festival is recognizing the community’s future leaders. Each year, local high school juniors are selected to participate in the festival based on their academic achievements and volunteer activities.

During the festival, these outstanding young men and women organize community service projects, take part in festival events, and are presented to the community at a Coronation Ball.

The proclamation was presented to Jill Williams, chairman of the Lunar Rendezvous Festival’s Advisory Board, and Michael Landolt, chairman of the festival’s Board of Directors. Also present for the proclamation were Advisory Board members Annette Dwyer and Teri Dieste; Mary Ann Shallberg, Gloria Wong and Kippy Caraway, who serve on the Board of Directors; Lunar Rendezvous Festival 2014-2015 Royals, Queen Allison Powell, Queen Alternate Demerle Monks and Captain Jack Mullen; and festival volunteers Justine Powell and Sara Mullen.

The festival will celebrate its 50th anniversary throughout 2015. For more information about Lunar Rendezvous and upcoming events, go to www.lunarrendezvous.org