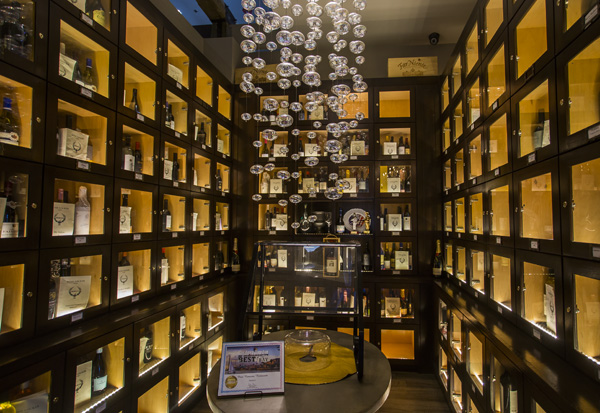 On August 26, 2017, Keith Lilley, owner of the waterfront restaurant Marais on the Bayou in Dickinson, carefully guided his boat toward the second-floor balcony of his barely four-month-old restaurant.  Hurricane Harvey dumped 50 inches of rain the night before causing the normally docile Dickinson Bayou to surge feet upwards from its banks, forcing water in all directions through this Galveston County city.  From his boat view, Keith could tell that The Plank, the first floor Pirate Bar, was now underwater and totally destroyed.  His neighboring restaurant, Dickinson Bar-B-Que & Steakhouse, was immersed in almost five feet of murky liquid mess.

As he gingerly stepped into Marais, which ironically means “Bayou,” he noticed the lights were on and the floors were dry.  The elegant second floor restaurant had escaped the deluge.  His sigh of relief was interrupted by his phone.  The Galveston Sherriff’s Department calling to see if Marais could provide food for hungry first responders that were conducting rescues throughout the area.  Without hesitation, Keith put thoughts about his losses aside and began rounding up helpers to prepare meals for others.  Once again, it was time to go to work. 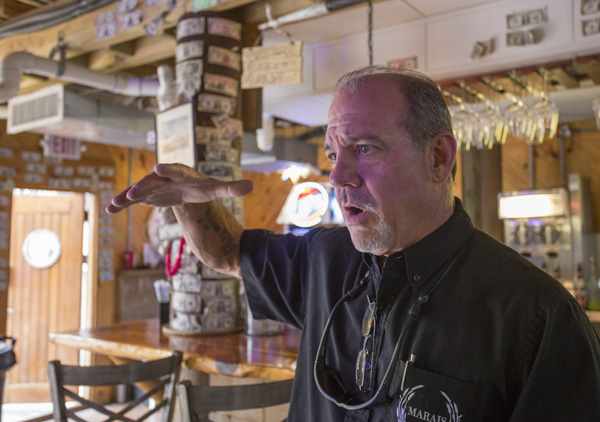 Keith Lilley started working in restaurants during college as a bartender.  His journey shot him quickly to management as he developed multiple restaurants in local and regional areas.  Keith, along with wife, Holly, and their two sons, moved across the country several times until he decided it was time to relocate closer to home where he became Vice-President of Operations for Houston’s Café Express in 2003.  He remained in the executive suite through several buy-outs until 2009, when as president, a company reorganization forced him out.  In true matter-of-fact Keith Lilley style, he described this change as a good business decision and simply moved on to figure out what to do next.

With all his years of restaurant experience at many levels, Keith decided it was time for him to open a restaurant, Dickinson Bar-B-Que.  His friends thought he was crazy for him to make such a lifestyle change, but he wanted the challenge of opening his own place.  Holly quit her job and came to help while they struggled with this new venture, hoping just to make ends meet.  They were working daily, creating a new catering line, and serving some of the best barbeque in the area.  That’s how they were discovered by the ABC television show, Extreme Home Makeover – Kemah, who used them to cater a function for 1500.  Dickinson Bar-B-Que was now on the map.

In 2015, rumors were swirling that the owner of the Mexican food restaurant next door to them decided to retire and sell the building.  So, they bought it.  The Lilley’s weren’t sure what they were going to do with it, but they wanted it to complement their barbecue restaurant.  It was time to reinvent again.

Marais (pronounced mah-ray) was born out of their love of New Orleans.  It was built to look like a very old building with all the charm and character of the French Quarter: custom Bevolo gas lamps in the NOLA Bayou Brick walls.  There are fourteen hand-assembled chandeliers gracefully sweeping the ceiling.  Guests are greeted in the entry way with floor-to-ceiling glass wine lockers.  The big doors and glass walls resemble the walk-through windows of Galveston and New Orleans. 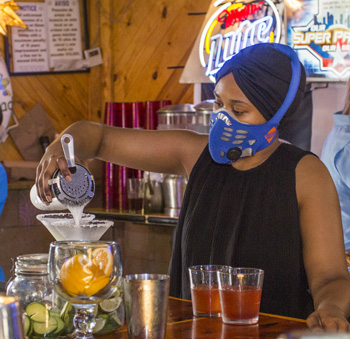 There are touches of Texas amid the Cajun homage.  The Emmite Room, a private, glass walled dining room is named for a prominent Dickinson Family. The lovely Benson’s Bar overlooks the Bayou, Benson’s Gully to be exact, a tribute to the city’s founder.  Benson’s also has barstool swings and a saddle chair.

Marais opened in April, 2017 on the Thursday before Easter.  There was scarce parking available at the time and a nervous staff wondered if anyone would come.  On Friday night, they served 400 people.  Folks continued to come all weekend long.

Marais took off.  With its upscale menu of Cajun inspired cuisine and excellent wine list, it became a restaurant of destination.  The word was spreading and diners were eager to try out this elegant waterfront restaurant, even if they had to park on the street.  The Lilley’s negotiated with the Dickinson School District to use their parking lot in off hours for staff and valet parking.

Then came August 26th, and the night of Hurricane Harvey.

Within days, Keith, Holly, and the staff of both restaurants were all back cleaning, clearing, and planning.  Marais reopened Labor Day Weekend, just days after the storm.

Marais combined the two restaurants into one building.  On all-day Mondays and weekday lunches, it hosted Dickinson Bar-B-Que.  On nights and weekends, Marais was back.  The two staff worked together in the beer and chandelier atmosphere for five months until they could reopen next door in the newly redesigned barbecue restaurant.  They also purchased flood-destroyed houses right behind them for demolition and new parking lot.

There were doubts.  There were setbacks.  There were struggles.  However, they didn’t lose any employees.  Everything was up and running with more growth, more customers, and more ideas like Sunday Brunch, Live Music, and a New Year’s Eve Party. 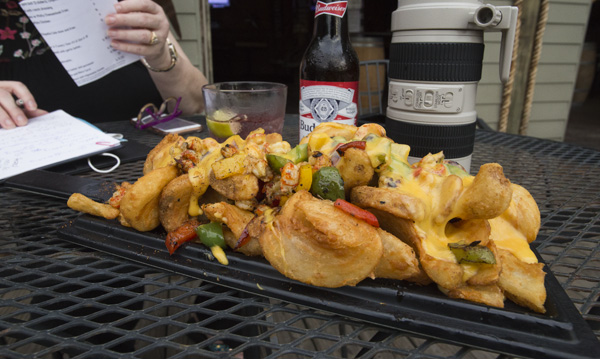 Wonderful food and drinks at Marais!

2020 was poised to be the big year for Marais.  They were on-fire with big dinner crowds, special events, and even all-you-can-eat crawfish at the Plank on Sunday afternoons.  Things were looking up for the Lilley’s until they noticed something odd happening around the country.  A virus, Coronavirus Disease 2019, was impacting people in China, Europe, and the Northeastern United States.  Large cities were closing down.  People were sent home to work.  Businesses were in jeopardy.  And, it was all heading to Texas.  Governor Abbott announced a statewide shutdown effective March 19, 2020.  All restaurants and bars were closed.  Businesses, churches, and schools shuttered their buildings and became virtual entities.  Store employees masked up and protection shields sprouted up around the cashiers.  It was as if the bayou had risen again to take away everything they had done to survive and conquer the deluge.

But, Keith and Holly Lilley knew it wasn’t time to quit.  It was time to re-invent who they were and who they needed to be to respond to this latest crisis.  The Marais Staff started a delivery service and curbside pick-up using everyone’s help, including the chefs, bartenders, and waiters.  They rearranged some dishes so they would travel easier and used their own people to deliver so that things would arrive in good order.  What can be done to feed families needing something fast at the end of the day?  They created seafood pot pies made in assembly line fashion which sold by the dozens.  How can the crawfish boils be continued?  They produced Bayou Boils with crab, crawfish, shrimp, potatoes and corn for $35 a box, selling 150 to 200 per day.  Plus, when the governor allowed drinks to be delivered or sold curbside, they went by the gallon. 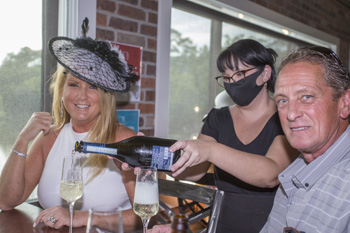 So with the help of the government loan program and a little ingenuity, Marais could hold on to staff and their business.  Marais has made it through the summer with their socially distanced tables, staff in masks, and employee health screening without closing again.

In the Fall 2020, things are coming back again.  Guests have adapted.  Live music is once again available at The Plank.  Plans are moving forward for the adding swings to the Terrace and putting a roof over the Dickinbach Beer Garden.  People are coming up the Bayou on jet skis and kayaks to eat dinner.

At Marais, their motto is, “Love All – Serve All.”  Despite all, Marais triumphs.  Like Keith says, “This wouldn’t have been the chosen path, but it’s always better afterwards.”