Anglers have been reporting a number of new species of fish being caught over the past few years and are curious about what is attracting them to the Galveston Bay Complex. Among them are mangrove snapper, also known as gray snapper. 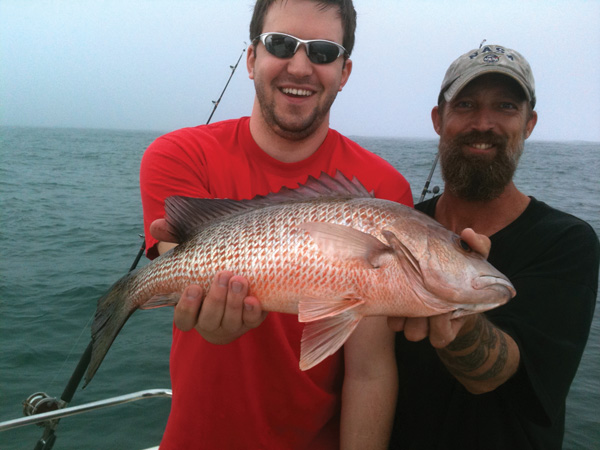 In visiting with fishermen who often fish the Galveston area, I find that many have experienced the same thing as I in that we are catching a lot of mangrove snapper.  What is so unusual about this is in the fact that twenty years ago they were not very common around Galveston Bay and, when one was caught, few anglers knew the identity of their fish.

While they still are not listed among the more common fish caught around here, more and more anglers are becoming familiar with the fish and the ones that keep them for the dinner table find that they are outstanding tablefare.

Ever since I started offshore fishing I would catch mangrove snapper along with other reef fish around structures and subsurface rocks and wrecks well beyond the jetties.

The big question in my mind and also others is “Is there a reason why we now are catching so many in the bays and around the jetties?”  For the answer to that question, I consulted an expert on fish and that is Lance Robinson, regional director with the Texas Parks and Wildlife Department.

Robinson responded to my question by saying, “Yes, there is a reason we’re seeing more mangrove (gray snapper; Lutjanus griseus) being caught farther up the coast than in years past.

Water temperatures are up and our winters have been relatively mild. Also, salinities have increased due to the ongoing drought, which this species prefers.  This species has greatly expanded its range over the last 10 years or so and fishermen are discovering where and how to catch them.

We’ve had some requests from fishermen to place harvest limitations (size and bag limits) on the species, but at this time there are no plans to do so, primarily because if we get a good cold front that blows through the upper Texas coast the population will be knocked back to their typical range along the lower Texas coast.  The lower lethal water temperature for gray snapper is around 52-58° F, which we can easily see some years.  At this time we consider the species to be opportunistic expanding into new areas due to changes in climate patterns, and fishermen can take advantage of another fun to catch and great tasting species.“

While mangrove snapper are appearing in large numbers lately, lots of other fish rare to the inshore scene are being landed, just not in the numbers of the mangroves.

Last September while fishing around Pelican Island in Galveston Bay, I landed a small gag grouper.  The fish caught me by surprise as the only places I have seen them caught is in the deep waters of the Gulf of Mexico.

This year more calls than usual have been received by the Sports Department at the Galveston County Daily News asking for identification of an unusual fish that was caught inshore.  Most of the time, the identity is that of a species of offshore reef fish that has made its way into the warm waters of the Galveston Bay Complex.

Among those submitted (by picture) for identification were lizard fish, other varieties of snapper, pilot fish, black sea bass and tilefish.

While there are a number of new species of fish roaming our bays, you need to be familiar with the regulations before retaining them as many have size and bag limits with which most of us are not familiar.

Mangroves have no size or bag limits and, while most are on the small side in the bays, they do make excellent tablefare.