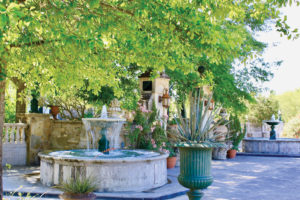 We came out here because my wife was in the mood to do a little “antiquing.” As you can probably guess, doing the “shop till you drop” thing doesn’t sound like fun to me. So, I figured I’d take the chance to go visit the Round Top Festival Institute. Over the years I had heard about the concerts and the poetry institute, but mostly I’d heard it was a beautiful place. I figured, why not? It sure beats going through dusty barns full of old furniture that we had no room for at home anyway.

If you haven’t been to the Festival Institute, you should make the trip. It is absolutely magnificent. Whether it is the enormous concert hall on Festival Hill, the chapel, or the gardens, the campus has to be one of the most beautiful man-made environments in Texas.

I spent most of the day outside, enjoying the gardens. I saw no one for a couple of hours. Then I came across one lone woman. She was sitting with her eyes closed, cross-legged on the stone floor next to a fountain. She appeared to be meditating. I had a feeling I knew what was going on.

I used to think people meditated to feel more relaxed—maybe to try to clear their thinking. But as I studied the workings of the mind over the years, and especially in some of my courses in grad school, I learned that there are much more “lucrative” uses for the practice. The one I find most interesting is because we want stuff.

As kids, most of us are taught that if you want something, the way to get it is to work hard to achieve it. Later, we were given more detailed information—such as directions on formulating goals: what a goal should look like and how it should be worded. You may have encountered motivational speakers like Tony Robbins or Zig Ziglar, who dealt with the subject in great detail. While I was certainly impressed with their work and found them useful at first, over time they began to seem a bit superficial. I guess that happened because I had the opportunity to see some more interesting, more powerful, approaches—approaches that most people would think were, well, ”unusual.”

I studied cognitive science in grad school and learned that there are two “sides” of the brain, the conscious and the subconscious. The conscious part allows us to think about how to do things and to learn new stuff. The subconscious part does things on its own, without our knowledge—makes our hearts beat, governs chemical reactions, etc. The subconscious also stores repetitive skills once we learn them. When first learning to walk, we had to think about every move we made, even more so in learning to run, or play the piano. But after we have practiced long enough, the skill was moved to the subconscious part of the brain and we no longer had to think about it. Remember when you were first learning to drive a car? You were squeezing the wheel so hard your knuckles were white. The cars parked on either side of the road were so close you were sure you’d be bouncing off one or the other—or both. And what about today? You drive with one hand, roll the windows up and down, talk on the phone, slap the kids in the back seat and drink a coke. You never give any of it a single thought. That’s a good thing. Just imagine what would happen if, in the midst of running, we had to stop to think about what we should do next with the left leg.

The subconscious cannot tell the difference between a vividly imagined thought and reality. If a thought gets into the subconscious part, the brain assumes it is real and goes about its business accordingly. It makes it happen. The problem is, how do we get the idea there? The two parts of the brain are separated by an electronic “curtain” that ensures whatever you are consciously trying to do enters only the conscious side.

I first saw this problem addressed back in my sports writing days. I noticed how sports psychologists used mental tricks to lower that curtain and plant in a player’s subconscious an idea that will improve performance on the field. One method I found particularly intriguing was having the player count from one to ten and ten to one, forward and backward at the same time. It sounds easy, right? One, ten, two, nine, three, eight, four, seven… but when you reach the five, six, six, five crossover, the brain boggles, and the electronic curtain falls for an instant. At that moment, the psychologist tells the player what he wants him to do and the player usually goes out onto the field and does just that. I have asked several players about the experience and they usually claim they never heard the instruction.

Both Taoism and Zen Buddhism tell us that mind is most powerful when it is quiet. They call this state “non-mind.” When we can shut down thoughts (usually in the form of language—talking to ourselves) we can lower that electronic curtain that separates the conscious from the sub-conscious for maybe a second or two and we can then plant in the now-clear mind the idea of what we seek. That is one goal of meditation—to quiet the mind so we can plant an idea directly into the subconscious. Need financial security? Plant the idea “affluence” in the gap between the thoughts. Once done, the mind goes to work to produce it with no effort on your part. When we turn off the electronic curtain, even for a second, we turn on an electromagnet that pulls the things we want to us.

It was beautiful there in the shade by the fountain and I would have liked to sit on the stone wall and spend a little time there listening to the water and the birds. But I was afraid my presence there might disturb her, so I moved on. After all, I had a lot more of the festival grounds to see before lunch.

To this day, I don’t know if the woman by the fountain was after affluence, someone to love, or simply a good day. But it seemed to me she was on the right track. At the very least, she was spending some quality, private time in a magnificent place. That sure beats antiquing.

By the way, when you do go to Round Top, Be sure to stop at Royers for lunch. Although they are known world-wide for their pies, I recommend the jalapeno cheese soup.

Posted on Tuesday, May 1st, 2018 at 8:15 am | Category News | Tags: Michael Gos, Round Top, Round Top Antiquing, Round Top Festival, Round Top Texas, Visiting Round Top| Comment |