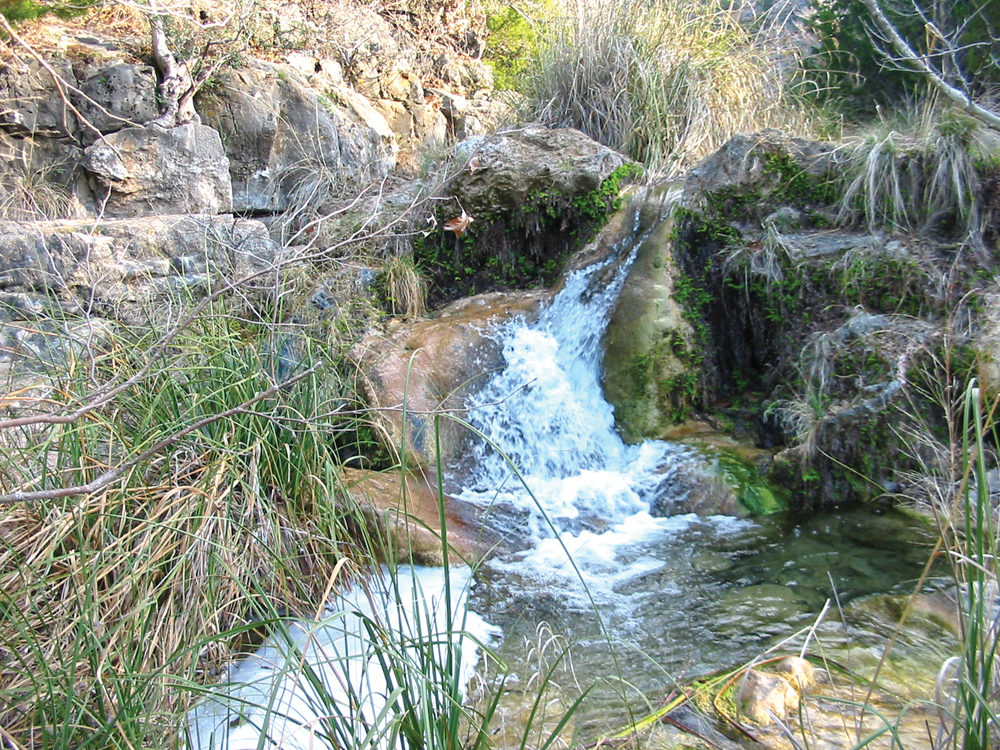 Each of the little rivulets had carved out a whole series of potholes that held pools of water. Photo by Michael Gos

It was about 20 years ago, when I was still a newbie to Texas. I had spent the morning in Fred with some friends who came down from West Lafayette for a week-long bicycle rally. Being a bit of a slug myself, when they decided to head out for a 100-mile afternoon ride, I decided to try to find Llano and experience Cooper’s Bar-B-Que for lunch. I had heard about this place many times over the five years I had been in Texas but had never had the opportunity to experience it. This seemed like as good a time as any.

So I headed north toward Llano. A colleague had told me it was in the northern, old section of town, just off the main road. He said I couldn’t miss it. What he failed to tell me was it was hiding behind a grocery store and couldn’t be seen from the highway. So I drove through town, looking, but never saw it. Eventually I came to open country and it was clear I had left Llano. Determined to turn around at the next intersection and try again, I sped up and headed out into the country.

But there was no next intersection, at least not that I saw, until I hit the tiny town of Cherokee. There I saw an east-west road. Because it was a town, I figured I could surely make a couple of rights, circling the block and back to highway 16. From there I could make the return trip to Llano.

But there wasn’t a next street. Instead, the street I was apparently now destined to follow became a very narrow, country road. I suppose it was meant to be two lanes but there was no way two cars could pass each other without both of them driving two wheels off the road onto the shoulder. Fortunately, I never had to test this. I drove for miles without seeing another car. Eventually, realizing I was getting way off my intended route, I decided I would take the first county road I saw that headed south and try to hit 71. This time I would approach Llano from the east. But that road never came. Instead, the road I was on turned to gravel and went on for a few more miles, finally dead-ending into a dirt road that was marked with a tiny sign that said “Colorado Bend State Park.”

Colorado Bend is not like any state park I had ever been to. There is no gatehouse or any signs of civilization anywhere. That dirt road just continues—and continues. What seems like several miles later, it dead-ends in a canyon carved out by by a river. The area has only a mobile trailer for a headquarters and an outhouse. Figuring I was now a long way from Cooper’s, and lunch was probably out of the question, I decided to have a look around. After all, I was already here.

I always begin my exploration of a new park with a trip to the visitors’ center to find out what the top attractions are, where I can go to see no other humans for a few hours, where to get the best photos, etc. Since this place didn’t have a visitors’ center, I went into the trailer to see if there was someone there who could give me some information. There was. A park volunteer there told me about a cave and a waterfall, both accessed from trailheads several miles away, and about a cascade just down river that empties a small creek up above into the river below. Since it was close by, I decided to take a look at it first.

As I was leaving, she called me back and added that there were no concessions and no water anywhere in the park. If I wanted water, I’d better fill up right here. I went out to the Jeep, got my always-ready canteen and did just that.

As it turned out, the cascade was amazing. What started at the top of the canyon as a small stream passed through a series of small waterfalls that moved the water down the rocky hillside and then spread it into a number of rivulets that worked their ways down eight or ten different pathways. The truly wondrous thing was that this had been happening for so many centuries that each of the little rivulets had carved out a whole series of potholes that held pools of water. It was absolutely beautiful.

After spending about an hour there and then walking along the river as far as the rock canyon walls would allow, I headed back to the Jeep to drive to the trailhead for Gorman Falls. That hike was rougher, only because the first couple of miles were on a hilly gravel road. But the last mile or so, when it entered the woods, was spectacular. There was a lot of downhill climbing with rope handholds to facilitate a safe descent down to a river that I suspected might be the same one that carved out the canyon I had just been to. At the very bottom, was a small deck with two benches, one that faced the river, the other the waterfall. I sat down for a quick breather (like I said, it was a hard hike) and to maybe get a few photos. I got both done—in about three hours.

As the sun was setting and I was leaving the park, I started thinking about how my getting lost that day led me to a terrific set of experiences—experiences I never would have had if I knew where I was going and had indeed enjoyed some great brisket for lunch. Not finding Cooper’s, followed by my inability to find a way to turn around, sent me on a journey that I wouldn’t have missed for the world, and probably would not have ever taken otherwise.

It seems to me that in life, when things seem to be going badly, we sometimes reach a point where we feel lost. We no longer know which way to go, or what to do next. Sometimes we even begin to question who we are. When this happens, it is always a traumatic time for us. We feel confused, troubled and frustrated. But almost invariably, this is the point where our lives take a turn for the better. (I know…“it can’t get any worse,” right?) But if you think back on the really wonderful life-changing experiences you have had over the years, I would bet most of them began with just such a discomforting moment.

Perhaps the contrast between the bad times and the spectacular times make us really appreciate the latter. But I am sure there is more to it than that. When we reach a point in our lives where we no longer know what to do or which way to go, our journey has truly begun. Life will never be the same. And journeys invariably turn out well in the long run.
By the way, I did eventually find Cooper’s—many, many times.