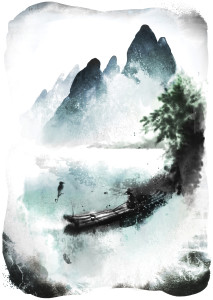 I have very few memories before the age of three. One of the earliest memories I do have, however, is the discovery that I hated cities and loved wild places.  I never thought about why I felt that way.  When you are four or five years old, that just is not a part of your thought process.

As I got older, those feelings intensified.  By and large I was an obedient child, but when I was in trouble, it was almost always because of wild places.  By the time I was seven or eight, I would head out almost daily into the few acres of woods that remained near my childhood home.  It was the only place I felt comfortable.  My parents didn’t share that comfort.

When I went away to college, weekends were often spent camping at a state park.  Even in the Indiana winter, I would take my tent, along with lots of newspaper to place under my sleeping bag, and head out to the wilds.  Still, I never questioned why.  It was just the way the world was.

I guess the first time I really thought about it was when I was in my forties.  I had come to Texas to work at the University of Houston.  It was my first time living in a large city and I was terribly uncomfortable, all the time.  When I took the job, I expected to feel that way so I never gave it much thought.  It was only after I had been there awhile that I began to see this as an issue.  At U of H I met several people who not only tolerated living in the city—they claimed to love it.  That took me by surprise; it was an attitude that was totally foreign to me.  The discovery that there were people who saw things differently made me begin to question for the first time, why I felt the way I did.

Whenever I know I have to go to a city, I research a few potential road trip destinations, just in case the need should arise. I was at a conference in Dallas.  After being there a full day, I had to escape. I got into the Jeep and drove to the LBJ Grasslands.

I’m not sure why, but I have a driving need to see the entire array of what nature has to offer.  I love beaches, hills, open plains, deserts and deep woods; my absolute favorite is the mountains.  But this place was different than any of those.  Bordering two zones, forest and prairie, the LBJ Grasslands feature rolling hills with lots of open grassy areas comingled with patches of forest.  It is not one of the more beautiful places in Texas, but still it felt so much better than Dallas.  And frankly, I was excited because this kind of environment was something new to me.

It made for a pleasant morning.  I had the opportunity to walk along the edge of a small lake, to drive down dirt and gravel roads, and most important, to hear nothing for several hours but birds and the wind.

In the early afternoon, I walked a trail through a heavily wooded area and got to thinking once more about why I was so uncomfortable in Dallas yet loved it in this rather unremarkable wild spot.

My first thought was that my situation had something to do with the archetype of the garden.  In Western art, literature and mythology, the garden represents the Garden of Eden—the world as it was before it was spoiled by man.  In our culture, this archetype shows up most powerfully as a trip to the wilderness.  Early American literature is full of such references.  When things get rough, man retreats to the wilderness where he can get in touch with his true humanity and experience the world as the creator intended.  Most of us are familiar with Thoreau’s Walden but there are countless other examples as well.

But as man paves over more and more of the world, those wild places disappear and he is forced to create small, artificial garden spots to allow him a small idea—a remembrance if you will—of the real thing.  Some are in city parks, some in backyards.  Wherever they appear, gardens have come to symbolize the idea that life was better, more fit for humans in the past.

Joseph Campbell claims that we humans all share the same archetypes, regardless of the culture we come from, because we all share the same concerns and insecurities.  We know instinctively that we can’t be the kind of humans we were designed to be unless we are in an environment that was designed with us in mind.  But those environments are rapidly disappearing.  Their replacements, cities, are dehumanizing.  We rely on the archetype of the garden in our art and our stories to remind us of what it was like to be human.

While that made sense to me, and helped to explain how those who liked cities could deal with the tremendous loss in their lives of the places where we truly belong, it didn’t feel like the entire story.  I sensed that, for me anyway, there was more.  If all I needed was to be in the original garden, the wilderness, I could pick just one spot, say the Big Bend region, and stay there.  But I don’t.  I need to be in all the various types of wild places.  And not just to see them, but to study them, to try to learn their secrets.

Sunset was closing in and it was time to head back to the Jeep.  I came across a small herd of cattle grazing on land leased from the Park Service.  A mother cow stood with her baby beneath her; he was stretching out to get at his dinner.  I watched as he drank and then as he walked around the hillside, exploring his world, and trying to learn all there is to know about the place he lives.  And finally I understood.

Like that calf, I am trying to learn all there is to know about the world I was placed in.  Not the world of cities—that is man’s creation—but rather, the world that was created for man, the world of the Garden.  As I study these places, I am looking for patterns—things that repeat in the different spots I explore, even though those places appear to vary radically in nature.  I am convinced those patterns are there.  I just need to train myself to see them.

I thought about those patterns and why I have such a need to find them—about what they might reveal. Assuming that the universe was created logically, rationally (and I believe it was), those patterns just might give me a tiny glimpse into the great plan behind the design—in other words, into the mind of God.

It was dark by the time I got back to the Jeep and it was time to head out for dinner in Denton and then back to Dallas.  I had made no progress this day on seeing patterns.  But I did feel just a touch more human for having spent time in one of those wild places I’m sure was designed for me to occupy.