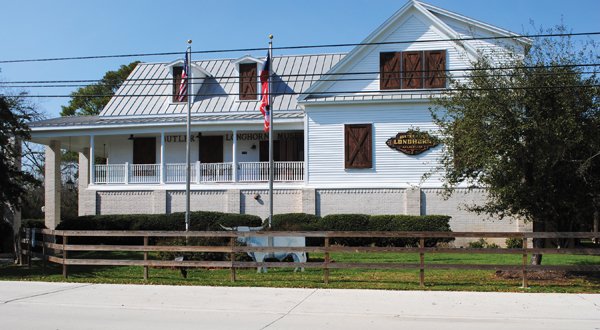 When you think of Texas, and you think of Longhorns. Yet few Texans realize that not so many years ago, Longhorns were on the verge of extinction and by the mid-1920s were outnumbered by buffalo.

Today their unique history is chronicled in a Bay Area attraction – League City’s Butler Longhorn Museum, which is just getting its bearings in the tourism world.

A visit to the museum takes one back in time to 1854 when George Washington Butler moved his family from Louisiana to Texas and established a ranch on Clear Creek, where he and his son, Milby Butler, became the most successful cattle ranchers in the state and their Butler Longhorns became a household name.

“Texas Longhorns are very exceptional animals,” said Maudeen Marks of the Cattlemen’s Texas Longhorn Registry. “They are very strong and their small ears are protected by their famous horns, while their long tails are good for swattin’ flies.”

It is no surprise that Milby Butler became renowned all around the county for his and his father’s one of a kind Texas Longhorns. At the time, the mother cows were carefully selected and placed in the same pasture with the father bull, so the new breed of Longhorn would be born with the correct shape of horn and genes.

Some of the red steers’ horns measured up to seven feet, tip to tip, at only 11 years of age with hair as soft as a feather and abilities as good as the king of the gods, Zeus. These were true genuine Texas Longhorns.

The Longhorn thrives today due to the efforts of pioneer breeders such as the Butlers and a few far-sighted federal employees who refused to allow these animals to become extinct.

The Butler Longhorn Museum, built in 2002 inside the newly renovated former home of famous Bay Area banker Walter Hall and tells the story of the breed’s amazing comeback. The League City Parks and Recreational Department created it as a way a preserve history and recognize the first established family in League City.

The museum on Coryell Street is filled with fascinating educational and entertaining possessions and belongings from the Butlers and other cowboys – such as Walter Osterman, who worked on the ranch. There are also many pieces of exceptional artwork done by area artists such as Kelly Halbach and Tim Miller and even a hometown personality, Jimmy Phillips. Newest additions to the museum are photographs of Butler Longhorn Cattle from the Johnson brothers and some old barbed wire from a local resident.

“My favorite exhibit has to be Ol’ Classic Ace,” said Bette Specion, museum president since 2006. Classic Ace was a Longhorn with horns that stretched more than eight feet in length. “But, I’d have to say our most popular exhibit is either Mrs. John Wayne or The Sunset Coral.”

Mrs. John Wayne is a shoulder mount head of the star Longhorn from the movie, The Alamo, while the Sunset Corral is a current exhibit, where visitors can walk through and see the Longhorns and other animals in action while listening to real noises from the great outdoors as the museum tells a compelling chapter in the history of the American West.

Funds that keep the museum up and running come from its accommodating sponsors and members who attend frequent fundraisers.

Specion says her biggest achievement is that they’re open. “We started out in the back building, went through two renovations and then Hurricane Ike,” she said. “It warms my heart when I hear the complements coming from people about the museum’s beauty.

The Butler Longhorn Museum has a lot to offer including tours, corporate events, weddings, art exhibits, and much more. In addition, it has an enchanting western dance hall and dance floor and a picturesque landscape with pecan and grapefruit trees.

“A lot of young couples get married on the garden grounds,” Museum Director Monica Hughes sayds. “We have a beautiful vegetable garden and an outside bar. And, let’s not forget the Texas-size barbecue pit.”

George and Milby Butler are remembered as two extraordinary men and cattle ranchers by a delightful museum that offers an incredible journey through history.

Those who would like to become a member or volunteer or tour the museum should contact Better Specion at 281-332-3961.