Leidos nears its 50th anniversary while NASA celebrates its 60th 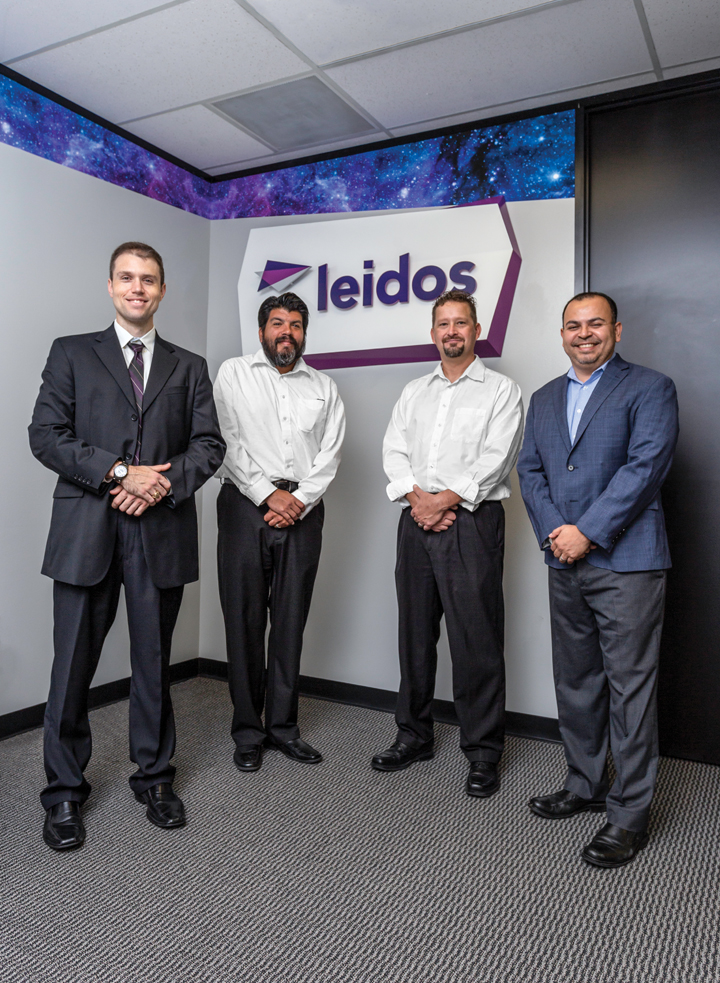 Leidos is a relatively new company name for some, but not altogether a new company. In fact, it has a 50-year anniversary coming up in 2019 — just after the 60th anniversary of NASA this year. And it has a long history in the space industry.

“At Leidos, our mission is to make the world safer, healthier and more efficient through the application of information technology, engineering and science,” Leidos NASA programs division manager Nan Hardin said.

The Fortune 500 company, she explains, is actually a combination of Lockheed Martin Integrated Systems and Global Solutions (IS&GS) and national security and commercial portions of SAIC before the company’s split in 2013, both entities with a legacy of technical support to NASA and the space industry.

“Through our heritage and deep understanding of the customer’s mission, we have built a track record of success at NASA centers and within the engineering and scientific community” Hardin said.

SECOND GENERATION
Many Leidos employees supporting today’s NASA contracts are the second generation to do so.

Jon Reyna, a quality team lead, explains that on the current Cargo Mission Contract they “plan, coordinate, prepare and pack standardized containers for all of the International Space Station cargo missions at NASA, international partners and commercial hardware vehicles.”

“We have different layout requirements for each vehicle, so there are no two cargo missions that are alike,” Reyna said. The cargo, he said, usually includes things like food, clothing, crew provisions, soft goods, computer hardware and other electronics gear, batteries, cameras, and experiments.

Reyna’s father also worked for NASA; he was involved in working with mission patch designs and on documentation for flight controls as a graphic artist. His dad worked for multiple NASA contractors and retired at the end of the shuttle contract.

Tyler Minish and Kimberly Johnson, both with the Integrated Mission Operations Contract that is known as the plan/train/fly contract, also followed in their parents’ footsteps.

Both of Minish’s parents worked right here in Houston at the Johnson Space Center. His mother worked in the reconfiguration group, helping train astronauts. She helped with the computer programs of the motion simulators, and later moved over to help support the International Space Station. His father first worked writing software for the shuttle motion simulators before moving into the crew training office and then to the International Space Station. Minish’s father still works in the mission controls center.

In similar fashion, Johnson calls herself a “second gen space cadet” because her mother worked for NASA during the Apollo/Gemini era as a secretary for the engineering director in the Space and Life Sciences Directorate. 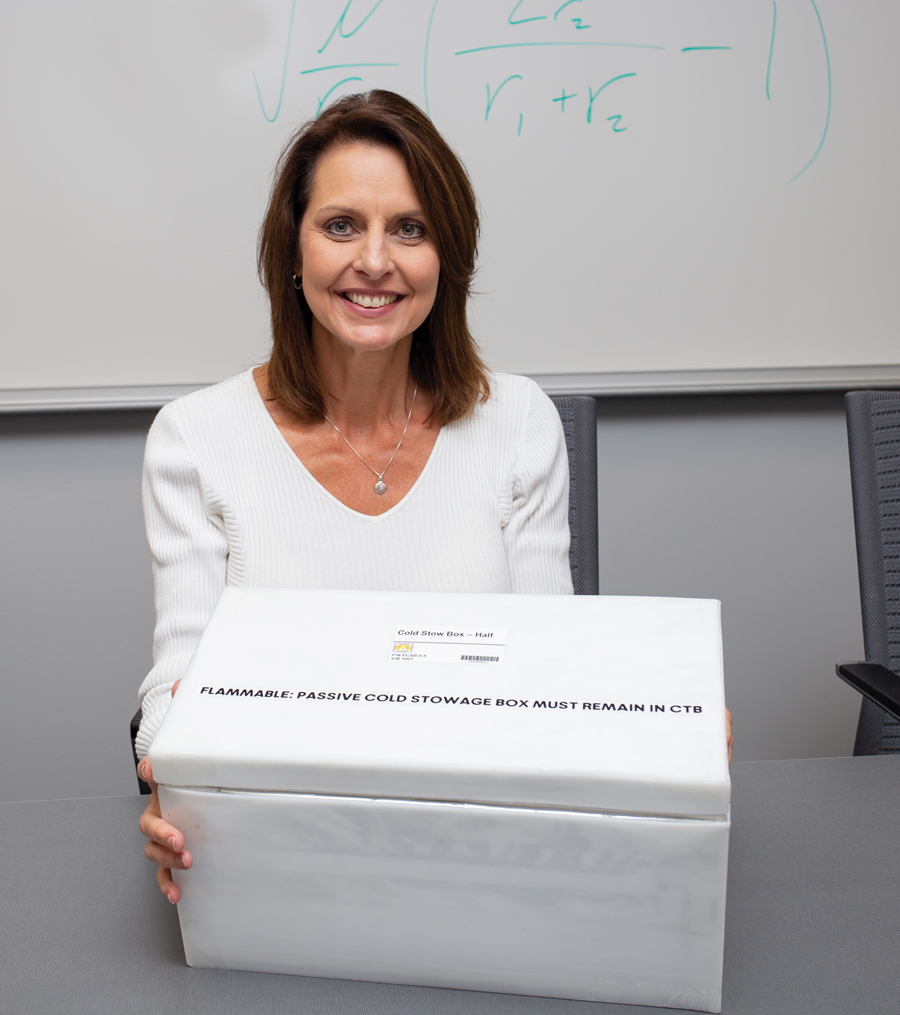 Kimberly Johnson of the plan/train/fly contract with a cold stow box.

Johnson was hired on in 1992 by Lockheed Martin, and over the course of her career, she was a crew procedures engineer helping write and format flight data file documentation on shuttle missions. “I got to watch the astronauts get trained and execute the procedures that I was a part of,” she said.

When she was hired, she was a Russian technical specialist flight controller, and she said that being a part of the generation when the U.S. and Russia worked together was a great feeling, knowing that previous tensions between the countries prevented the collaboration.

Like Minish and Johnson, Wes Tarkington is also a 2nd generation employee. His father worked at Johnson Space Center for 33 years. He had been hired early in the Gemini program, worked through Apollo, and was part of Space Station Freedom when it was transferred to Virginia. His family almost moved up there, Tarkington said, but instead, his father transferred to a different department and became mission manager for the Space Shuttle Program.

Tarkington currently supports the Human Health and Performance contract, which provides medical health services in support of all the astronauts.
“In my current role within the human health performance contract, I manage a task order that includes support services and personnel for NASA’s crew health and safety program and also includes NASA’s integrated medical model, lifetime surveillance of astronaut health program and the life sciences data archive,” He said.

He described his role saying he has a team of medical, scientists, and PhDs who monitor and try to identify common conditions that have occurred with crew members as a result of their exposure to space flight.

PROUD MOMENTS
Tarkington said that one of the accomplishments he is most proud of is getting the “Treat Astronauts Act” signed into law. Basically, this bill gives astronauts a legal right to medical care beyond their time working in space flight, in case of any issues that the work may have caused. In return, NASA retains the data over what damage may or may not be caused for use with future flight crews.

Another one of Tarkington’s favorite memories working in support of NASA, he said, was meeting his now-wife of 13 years. “That’s obviously a memorable moment in my career here at NASA,” he said.

For Johnson, one of her proudest moments came when she was working in Moscow in support of the MIR program. “I received a call down from astronaut Dave Wolf recognizing my effort where I scheduled out his day as a planner,” she said. 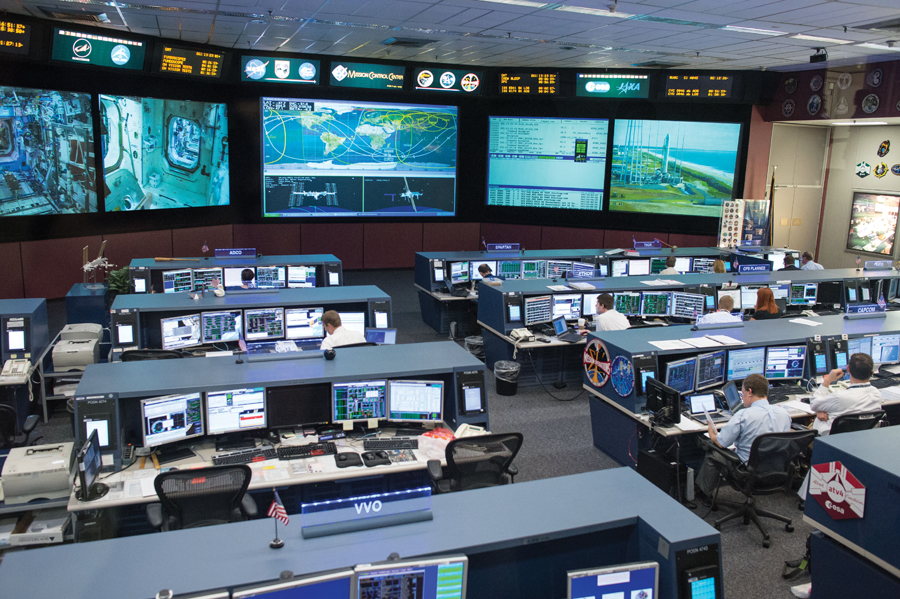 A MATTER OF TRUST
According to Carlos Aguilar, a business development manager supporting NASA programs, many of the accomplishments being made right now are due to trust and collaboration between Leidos and NASA.

“Our management team really works hard to make sure that our performance is consistent,” Aguilar said, “we’ve also worked to have clear and open dialogue channels with NASA so we can get the feedback we need on our performance and make any course corrections.”

He said that Leidos strives to achieve a partnership, but they want NASA to be the judge of whether it really is.

He continued to say that it is not easy to keep pace with an agency like NASA, but he says that Leidos aims to help with innovations and improvements however they can.

“We are here to help do three things: Innovate, provide NASA with a top tier work force, and deliver on our corporate commitment to accomplish NASA’s mission.”

Leidos is the proud sponsor and underwriter of Bay Area Houston Magazine’s special issue celebrating NASA’s 60th Anniversary. Kudos to Leidos for all they do to support the manned space program. [article export control #20196]